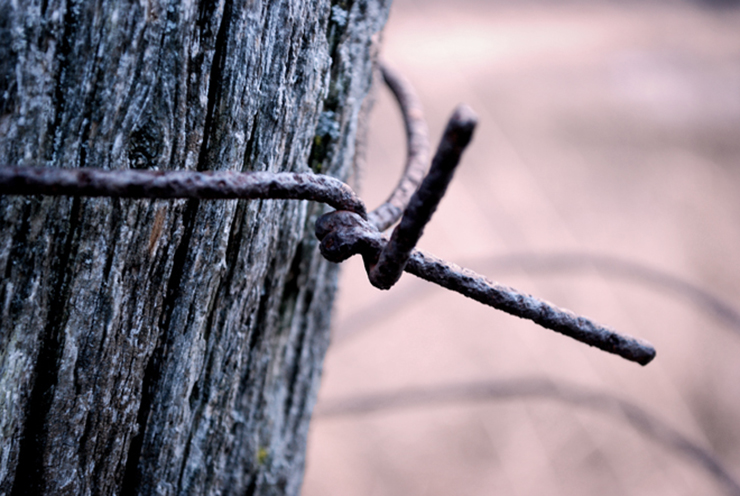 We’ve gathered a collection of poems about wood that would make any woodchuck smile. If a woodchuck could smile. Or would.

Something blurred, warmed
in the eye’s corner, like woodsmoke
becoming tears;
but when you turned to look

the stoop was still, the pumpkin
and tacky mum pot wouldn’t talk —
just a rattle
at the gutter and a sense

of curtains, somewhere, pulled.
Five of     them later, scarfing the oak’s
black bole,
laying a dream of snakes.

Needy and reticent
at once, these squirrels in charred November
recall, in Virgil,
what it is to feel:

in some flash of   luck
to be revealed. The less you try
to notice them,
the more they will know of  you.

— Craig Arnold, author of Made Flesh

— Will Willingham, author of Adjustments

A sleeper, they used to call it—
four passes with the giant round saw
and you had a crosstie, 7 inches by 9 of white oak—
at two hundred pounds nearly twice my weight
and ready to break finger or toe—

like coffin lids, those leftover slabs,
their new-sawn faces turning gold and brown
as my own in the hot Virginia sun,
drying toward the winter and the woodsaw

and on the day of that chore
I turned over a good, thick one
looking for the balance point

and roused a three-foot copperhead,
gold and brown like the wood,
disdaining the shoe it muscled across,

each rib distinct as a needle stitching leather,
heavy on my foot as a crosstie.

— David Black, author of The Clown in the Tent

Early morning, the earth is nothing.

Then, the golden prairie flames,
the timber plain consumed.

— Dave Malone, author of O: Love Poems from the Ozarks

6. What My Father Left Behind

Jam jar of cigarette ends and ashes on his workbench,
hammer he nailed our address to a stump with,
balsa wood steamship, half-finished—

is that him, waving from the stern? Well, good luck to him.
Slur of sunlight filling the backyard, August’s high wattage,
white blossoming, it’s a curve, it comes back. My mother

in a patio chair, leaning forward, squinting, threading
her needle again, her eye lifts to the roof, to my brother,
who stands and jerks his arm upward—he might be

insulting the sky, but he’s only letting go
a bit of green, a molded plastic soldier
tied to a parachute, thin as a bread bag, it rises, it arcs

against the blue—good luck to it—my sister and I below,
heads tilted back as we stand in the grass, good
luck to all of us, still here, still in love with it.

Listen. . .
With faint dry sound,
Like steps of passing ghosts,
The leaves, frost-crisp’d, break from the trees
And fall.

From this room you see what your father saw:
valley and dark blue clouds, the pond’s lip
butted to the sloping hill, toy lights winking

to life so far below. In this room tools
are ranged on every wall—the big saw in its cabinet,
routers and lathes, the hand tools slowly rusting

in their drawers. The year he died your father
spent what time he could here. Turning a blank,
he’d watch the trees color and come into full leaf,

forget what bloomed in him. His last wish
was that his body be burned, so there is no place
you can go to look for him. On good days

you imagine him roaming, amazed, through an enormous
light-filled place. You teach yourself, now,
what he knew: how at the center of each tree

there is a spine of dead wood, buried beneath
sapwood and bark, where the tree shapes dense,
extravagant, wild grains. This is the part

and abandons what is in this room, and you work through
the hour of its lapse, keeping your hand steady against
the jigging saw, scraping the plane in one clean line.

Still, every piece you make bears on some face
the faint mark of your tools, a dig beyond repair,
some knot that can’t be sanded or refined.

The couple in Van Gogh’s blue wood is walking
where there is no path, amid tall,
seemingly branchless blue and pink trees. The tree crowns
are beyond the frame, reaching up into our mind’s eye—
because we know where trees go and that they are full
of wind and a thousand softly stirring
machines that are alive. Equally out of sight, for
nests of intricately woven strength and fragility hang
like proofs that there are no diagrams or maps
for life’s most important journeys. The horizon
at the couple’s back, between the trees, is black.
They walk toward light. Crowds of waist-high flowers,
on thick-leaved stalks, sing in stout slurries of pink and white.

The couple cannot think of anything good
ever coming from anger, so they are more happy than not.
That could be true. Maybe I want it to be
true of me, of us. And like us, they may have worn paths
to the most forest-deep secrets in each other’s lives.
Or perhaps they are only now on their way to the place
where they will become lovers, the excitement of their flesh
through their clothes singing, making them careless,
giddy, and light as birds in flight.

Of course, we can’t know any of this. Perhaps, even Van Gogh
didn’t know anything about them: so many unseen possibilities
lived in a blue wood, so like ours.

— Richard Levine, author of A Tide of a Hundred Mountains

When I see birches bend to left and right
Across the lines of straighter darker trees,
I like to think some boy’s been swinging them.
But swinging doesn’t bend them down to stay
As ice-storms do. Often you must have seen them
Loaded with ice a sunny winter morning
After a rain. They click upon themselves
As the breeze rises, and turn many-colored
As the stir cracks and crazes their enamel.
Soon the sun’s warmth makes them shed crystal shells
Shattering and avalanching on the snow-crust—
Such heaps of broken glass to sweep away
You’d think the inner dome of heaven had fallen.
They are dragged to the withered bracken by the load,
And they seem not to break; though once they are bowed
So low for long, they never right themselves:
You may see their trunks arching in the woods
Years afterwards, trailing their leaves on the ground
Like girls on hands and knees that throw their hair
Before them over their heads to dry in the sun.
But I was going to say when Truth broke in
With all her matter-of-fact about the ice-storm
I should prefer to have some boy bend them
As he went out and in to fetch the cows—
Some boy too far from town to learn baseball,
Whose only play was what he found himself,
Summer or winter, and could play alone.
One by one he subdued his father’s trees
By riding them down over and over again
Until he took the stiffness out of them,
And not one but hung limp, not one was left
For him to conquer. He learned all there was
To learn about not launching out too soon
And so not carrying the tree away
Clear to the ground. He always kept his poise
To the top branches, climbing carefully
With the same pains you use to fill a cup
Up to the brim, and even above the brim.
Then he flung outward, feet first, with a swish,
Kicking his way down through the air to the ground.
So was I once myself a swinger of birches.
And so I dream of going back to be.
It’s when I’m weary of considerations,
And life is too much like a pathless wood
Where your face burns and tickles with the cobwebs
Broken across it, and one eye is weeping
From a twig’s having lashed across it open.
I’d like to get away from earth awhile
And then come back to it and begin over.
May no fate willfully misunderstand me
And half grant what I wish and snatch me away
Not to return. Earth’s the right place for love:
I don’t know where it’s likely to go better.
I’d like to go by climbing a birch tree,
And climb black branches up a snow-white trunk
Toward heaven, till the tree could bear no more,
But dipped its top and set me down again.
That would be good both going and coming back.
One could do worse than be a swinger of birches.

Poems are used with permission of the publisher or poet via Every Day Poems, appeared in our weekly poetry prompts, or are in the public domain. Photo by James Jordan, Creative Commons license via Flickr.