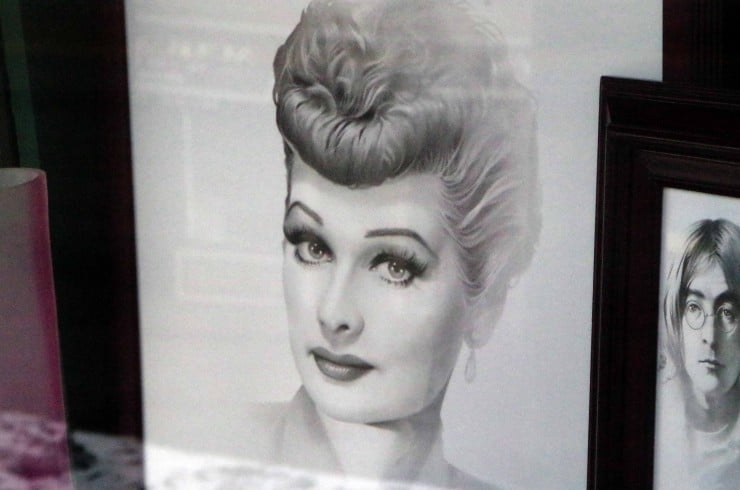 Lucille Ball is one of the greatest comedians of all time. She is most famous for the 1951 television show I Love Lucy, and received many awards during her career, including Golden Globes, five Primetime Emmy Awards, and the American Comedy Awards.

One little-known fact is that Lucy had an extreme fear of birds—and wouldn’t even stay in a hotel that had any pictures of birds—a fear which arose when she was three years old and a bird flew through an open window into her house, on the day her father died.

After her father’s death, Ball was raised in an extremely poor family, by her mother and grandparents, in Celoron, NY. At the age of 15, she dropped out of high school to enter a career in the arts by attending the Robert-Minton-John Murray Anderson School of Drama in New York City. She was, however, too shy to perform in front of the other students and couldn’t sing and dance as well as they could, so after a month, the school suggested she leave, saying “Lucy’s wasting her time and ours. She’s too shy and reticent to put her best foot forward.” On leaving the school, to prove them wrong, Lucy decided to work as a showgirl, and got a job as a chorus girl in several musicals. Another irony: she eventually starred in a movie called Best Foot Forward.

Not long after being in musicals, she found herself homesick and in a bad financial place, so she returned home. There, she got various jobs, including one at Walgreen’s soda fountain, where she got fired because she kept forgetting to put bananas in the banana splits.

Soon, though, and still in her teenage years, Lucy became a model under the name of Diane Belmont and later the Chesterfield cigarette girl. While being a model, she got rheumatoid arthritis and it took two years before she could walk again. When she could, she went back to modeling.

Later, Lucille Ball got into some films, the first of which was one where she played the small role of a slave girl—a part for which she shaved her eyebrows. In many photographs of her, you can see that her eyebrows are drawn on; this wasn’t just for the sake of style, as they never grew back.

In one film, after shooting a fight scene (and still with a torn dress and the makeup of a black eye) she met her future husband Desi Arnaz for the first time. She saw him again later that day. It was Desi Arnaz who eventually convinced her, when films were slowing down, to get into broadcasting, and she got a role in a radio show called My Favorite Husband.
Not long after the show’s end, she was approached by the CBS network to see if she wanted to make a television show based on it. She agreed on the condition that Desi Arnaz, who she was married to by this point, could play her TV husband.

The network didn’t want to agree, as they didn’t think the American public would find the marriage believable. In reaction, Lucy and Desi proved that they would make a great team by creating a vaudeville-type act which they performed in the middle of each show as Desi traveled with his rumba band. The act was a great success (and featured in the show’s fifth episode) and CBS finally signed them, making them the first interracial couple on television. And so they created I Love Lucy.

When I Love Lucy began, Lucille Ball was 40 years old, which was impressive, considering that actresses at the time were usually out of a job at about age 37. The show was performed and recorded in front of a live audience—a situation in which Lucy worked best—(they tried to do as few cuts and re-takes, for this reason) and was rated #1 within six months. Desi negotiated ownership of the show for he and Lucy so that their children could see it (there were no reruns in those days, although I Love Lucy would later see many) and had it aired with their recently-created company, Desilu Productions, a company that would go on to air Star Trek: The Original Series. Later, for millions, Desi sold the rights to I Love Lucy back to CBS.

During a later season of the show, Lucy discovered she was pregnant with her second child. In turn, her character on the show became pregnant. This made Lucy the first pregnant woman to play a pregnant woman on television.

After their first child, Lucy and Desi knew their baby would be born through C-section, and it just happened that their doctor only did them on Mondays. It also so happened that I Love Lucy was performed on Monday nights. So, that night’s episode was when both Lucille Ball and Lucy Ricardo had their children. Lucy’s parts in the episode were filmed ahead of time, and she was absent in much of it.

When her son was born, he was named “Desiderio Alberto Arnaz” or “Desi Arnaz, Jr.” Interestingly, it wasn’t just their children who shared their names. On I Love Lucy, not only was the main character called Lucy, but her husband Ricky’s full name was stated as “Enrique Alberto Fernando Ricardo y de Acha III, ” and Desi Arnaz’s full name was “Desiderio Alberto Arnaz y de Acha III.”

One day after I Love Lucy’s final episode was filmed, and Lucille Ball and Desi Arnaz had been married for 20 years, Lucille Ball filed a divorce. She eventually remarried to comedian Gary Morton, to whom she remained married for the rest of her life. Despite the divorce, she and Desi remained friends until his death. This wasn’t that strange, as she and Desi still cared for each other a great deal.

It so happened that after the divorce, not by any plan of her own, Lucy was always cast as unmarried characters. Two years after the divorce, Lucy bought out Desi, taking over Desilu Productions and becoming the first woman to run a major Hollywood studio. Eventually, she sold the company to Gulf-Western for $17 million.

She also bought RKO studios somewhere along the line (a studio that had rejected and fired her in her early career) and was the first woman to get the International Radio and Television Society’s Gold Metal.

Lucy played in many shows after I Love Lucy, but nothing ever did as well. She was given two stars on the Hollywood walk of fame (one for motion pictures and one for television) and to this day is remembered as a great person and an amazing comedian.

Here’s a classic scene from I Love Lucy. Enjoy and remember the comedic brilliance of Lucille Ball:

Write a poem about your favorite Lucille Ball moment from I Love Lucy. Paint a picture of the scene, Lucy’s part, and how you responded to it. Or, use some of the facts from our post above and create a found poem.

Thanks to everyone who participated in last week’s poetry prompt. Here’s a poem from Samuel we enjoyed:

To a Country Lane

Let there not be
between such friends
any concrete

walkways. Streets
stretch out and bend,
letting there not be

any grass or weed
beneath them —
only concrete.

They cannot see
what we see in
letting there not be

save you and me.
But for our end
let there not be
any concrete.