You’re riding the underground, or Tube, in London. It’s morning rush hour. You’re holding on to an overhead bar with one hand while holding your briefcase with the other. Your body moves back and forth with the motion of the train. You avoid eye contact with other riders; eye contact and conversation with strangers simply isn’t done (and not just in London).

You listen to the official intercom voice announcing what station is next, and telling those departing the train to “mind the gap.” The doors close, the train jerks forward, and you do something you don’t normally do—you glance at the Tube map to see your progress toward your station. It’s in a line with various advertisements.

Right next to the Tube map, you see this: 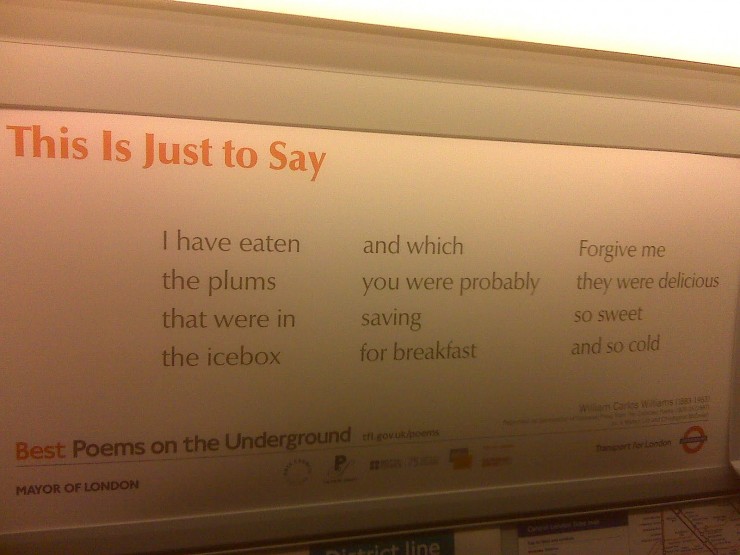 Since 1986, riders on the Tube have been able to see that and dozens of other poems. It started as an experiment by three friends and lovers of poetry. They convinced London Underground to post a few poems on the trains, and the managers actually doubled the number of spaces allotted. At some point, the three began to collect the Tube poems and publish them. In 2012, some 230 of the poems were collected and published as Poems on the Underground. The collection was reissued this year in a small but quality paperback—the dimensions are about the height and width of a postcard.

The three friends and poets served as the editors—Judith Chernaik (an American), Gerard Benson, and Cicely Herbert. (In the 2015 edition, Chernaik and Herbert noted that Benson died last year.) Rather than grouping the poems chronologically, the editors have assembled them into themes and categories: love; London; The Wider World; Exile and Loss; Seasons; The Natural World; Families; Out There; Dreams; Music; Sense and Nonsense; The Darker Side; War; The Artist as “Maker”; The Poet as Prophet; and Poetry: A Defense. Despite the diversity of poets and themes, I find they do have something in common, other than relative brevity. They are chosen to make a reader think, perhaps smile or frown, but to think about what it said and what is meant. There’s a rather plaintive tone to these poems—selected, perhaps, to surprise riders and make them consider what the poem is saying, like this one by Sylvia Plath:

I can say that I have seen several of the poems firsthand on the Tube, during recent visits to London. The first time, my wife, knowing I generally don’t read ads, nudged me and motioned toward what at first looked like an ad but was instead a poem. I was enchanted, and began searching them out on various Tube rides.

Related: Poetry for Life: Transport It – on Seattle Buses.

Photo by Geir Tonnessen, Creative Commons, via Flickr. Post by Glynn Young, author of the novels Dancing Priest and A Light Shining, and Poetry at Work.