Surprise will be one of the defining qualities of the Seattle Mischief Cafés, and it begins at the Thrifty Rental Car counter, with Laura Zimmerman. Laura is warm and welcoming, with a deep voice and large dark eyes, her thick hair straightened and shaped in such a way that it accents her easy smile. She and I are probably similar in age, I think as we talk, and her helpfulness gives me a confidence that I can navigate this city and its outlying regions alone. Starting out at this counter, though, I get the sense I am not quite alone. Laura asks me why I am in Seattle, wants to know more, ends up with the Mischief Café book in her hands and reads aloud a portion of Anne M. Doe Overstreet’s Resolutions.

“Ohhhh, ” she says with a jazz-like smoothness. “I like that.” We get to talking about poetry, music, daughters, and this experience becomes far more than a commercial exchange (my dollars for the Dodge Ram). So I read aloud to her, Whispered, and she likes that too. “So many lines, ” the poem ends, and we nod together in a knowing way. I leave her with a red feather, and she tucks it to her heart with another smile.

The lines go deep in me, whether we’re talking about life experiences, connections with others, or about poetry itself. In the next ten days I will be privileged to forge more lines, share more of them, be treated to more of them, like the way Jonathan brought a Neruda poem out of his pocket, at the Arlington café (I will be tickled by “I am tired of chickens. We never know what they think..” and the lines will remind me of Matthew Kreider).

I will regret not crossing lines with Luci Shaw, who fell ill with bronchitis, and our author David K. Wheeler, who the Seattle traffic (a phenomenon of its own!) will send back home before he even gets to the café. There are things that won’t happen, lines that won’t get drawn, wishes that will evaporate. I can let them make ruin, or I can focus on the many shining moments, including Anne’s soft steady voice reading “Resolutions” (the same poem Laura read, and yet so differently).

The mix of lines beautifully drawn and lines never realized is the reality of a complex trip like the 11-day Mischief Café tour, and it is a reality of life. Which do we let color our hearts, etch themselves deeply into us like initials into wood? which… which to let color, which to let etch, I choose the chickens, because they make me smile and they remind me of a good writer friend. I choose the golden light of Washington on tall autumn trees and dark evergreens, cinnamon toast and stories of how grandmothers made it, monk’s tea, Darlene’s poem that brought me here, a cut apple to take along into Seattle traffic. I choose Sarah’s yarn being made into comfortable things, an unopened bottle of wine that sits like a promise at the worn wooden table, Craig reading a poem aloud for the first time, and the peace of Kathleen’s back yard with its swing and displaced windows hanging beneath trellises. From Arlington, it’s on to Renton. I feel momentarily alone again, which I technically am, but then I have an overwhelming sense of togetherness, as I think, “I’m going to Jody’s house!” It occurs to me that I can travel this whole big country of ours, which I still do not know, and yet I would know so many people in almost every single state. The thought is strange and wonderful, and it gives me visions of future travels to all the states through which my lines have yet to trace. It makes me almost as happy as Jody’s phone call while I’m en route, to let me know Kimberlee Conway Ireton will indeed be coming to the café this night. 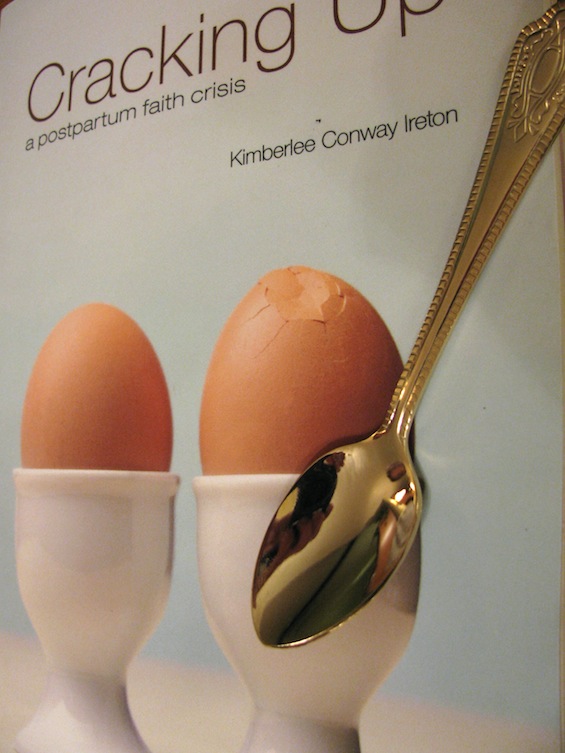 I will show up early despite the heavy traffic and, says Jody, “butter the toast very liberally.” We will chat in her kitchen “as if we’d been doing it all our lives…a blessed surprise.” The story of Donna’s gift of golden teaspoons will be told, and the gifts, gold, and surprises won’t end there. Says Jody,

I was surprised to be intrigued rather than repelled (as I was on my first read) by the form and sound of a sestina. As L.L. read, I found myself listening to the words as they looped through the air, trailing each other in conjoined phrases, like links in a chain holding a golden key at the end. I felt like the puzzle of the form had been unlocked as I listened. I was left feeling I might actually try to write one soon. See what fun reading out loud and cinnamon toast with tea can get you? Inspiration! Inspiration went around the table, as we shared writing and publishing stories, discussed our muses (or our struggles with them), and dreamed of future cafés (Jody has hopes to take them to Spokane, and spread the gifts and inspiration across Washington State). Laura and Jennifer especially felt renewed, and Jennifer (a Dverse poet participant) offers this poem along with her note, “The Mischief Cafe was just the creative encouragement I needed. Did my heart good!”

once upon a night
of intricacy and simplicity
there were
sestinas,
cinnamon swirls
toast
-y warm
and butter
-y

‘twas a night
to ravel rays from
ravished dreams