Last week, we hosted an event for our Team and our fans, in NYC.

Darlene wanted to come along. But the distance was great, and time didn’t allow, and maybe other things were thrown into the mix too. The long and short of it is that Darlene stayed in Washington, while we walked on Madison Avenue.

This was almost too much to bear, because Darlene has formed herself a case of Tweetspeak Love.

We like to think that such cases arise because of the great love we share here—the care we take to welcome people, but also to help them explore their hearts and souls and the measure of their power with words. We try to be that “middle place” for poetry and writing: an expert place that says ‘come’ but also gently says ‘grow.’

Back to the long and short of it now. Darlene sent a beautiful box of love to mirror her case of Tweetspeak Love. The box got stuck in New Jersey (which must have been needing extra love that week) and, like I said, it might seem we walked Madison Avenue without Darlene and without the wonderful love she’d sent along. See here, what was in the box that sat it out in the Garden State: So the box stayed in New Jersey, packed with all this hope. And it waited. And maybe the box of love thought it missed what it had set out to do.

Ah, but it just so happened that another Tweetspeak fan named Michelle came to Madison Avenue in a pair of cowboy (cowgirl?) boots.

How could she know. Via the boots, she’d brought Darlene. The boots are a trademark we know Darlene by, and if you look closely at the wooden doll picture above, you’ll catch a glimpse of the tops of carefully-painted boots that were meant to come along with us, but instead cavorted with delayed packages in some postal holding center.

Never mind. In the end, as it goes, we brought Darlene along to the Shakespeare Garden and the Belvedere Castle in Central Park. A vicarious boot trip, compliments of Michelle. Love finds its ways. 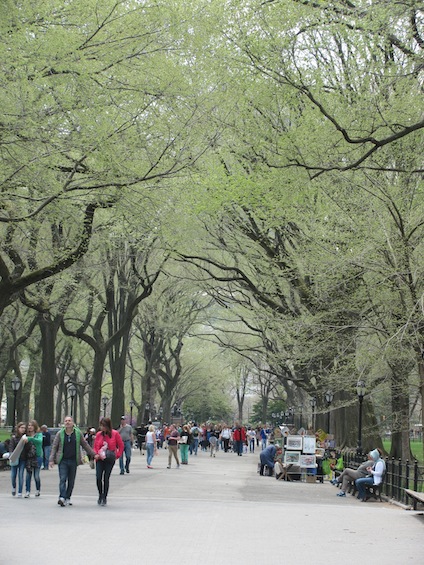 Now, we know this is a tribute to Darlene’s Tweetspeak Love, but we must add this about another fan who had wanted to join us: Marcy. Marcy sent a simple request that we please go to tea at Alice’s Teacup for her, because if she’d come to NYC, that is where she would have wanted to go. So we went. If love finds its ways, one of the best is through a cup of tea. 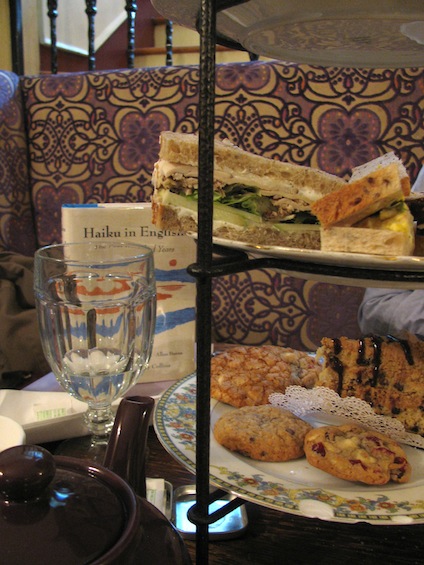 Of course, as we sat in the tea place with our Team, we had to read poetry. Donna read from Haiku in English: The First Hundred Years. I read Symborska and Tranströmer. A few nights later, there were other fans, other readings by those we love, such as Maureen Doallas.

And it all started here. With love and poetry. And maybe tea.