In a whirl, we recently dreamed up a traveling Mischief Café, and within hours of broaching it simply as a daydream, Michelle Ortega stepped up to host an event, with her friends and Tweetspeak’s L.L. Barkat (me) in attendance. The gathering at Michelle’s on October 29, 2014, at 6:30 p.m., goes down in history as the first of what we hope will be many Mischief Café experiences around the country (and the world). To paraphrase Michelle, “People get together to buy kitchen gadgets and for book clubs. Why not for poetry?” And the emphasis is on people, not on experts or poetry lovers per se, but people. At Michelle’s café, I asked her wonderful guests to tell me about their relationship to poetry up to this point, “Is it something you’ve been scared of? Thought was too hard? Or have you not even considered poetry as part of your life?”

No one at the gathering came as a poetry lover. A few may have left that way, or at least with the possibility of future poetry love. What fun we had. And poignant moments.

One guest has been wishing to go to a poetry reading, but she didn’t know how to enter in or who to ask to go with her (she recently discovered Neruda and suddenly felt a desire for poetry in her life). Another guest likes Iron Maiden’s Rime of the Ancient Mariner, but hasn’t really had poetry in her life (and she discovered at the gathering that she has a good ability to read poetry aloud and that she’d been familiar with a villanelle, but didn’t know it was a villanelle: “Do Not Go Gentle Into That Good Night.”) A music director and overall witty participant did a wonderful reading of “The Proposal” from The Novelist. Another said, “Girl!” and laughed after reading “Mushrooms” from Love, Etc. (and rather liking it for its mischief). There was even the important discovery of the delight of a honey server! A few T. S. Poetry Press titles were given away, after we finally established just what kind of bowl (and what size) might be needed for the job. Thanks to our community member Donna Falcone, golden spoons were also in attendance, and one was given to Michelle as both a thank you gift and as a tool for our giveaway choosings (and Sandra Heska King’s sugar bowl poetry poem in The Mischief Café book was suddenly discovered and read by one participant, for the occasion). 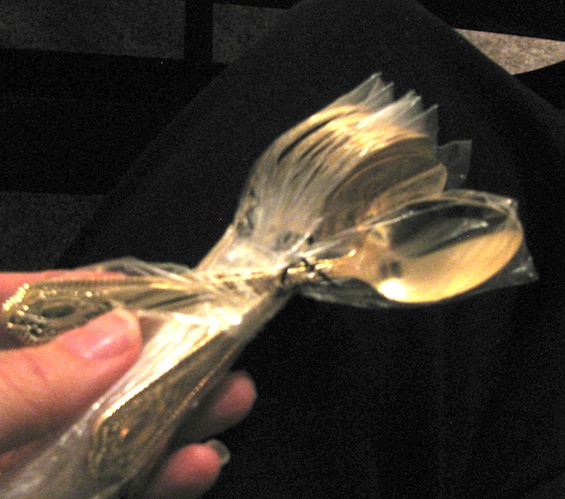 As sort of a tradition whenever Michelle and I get together without Darlene, there was the requisite boot showcase and photograph souvenir. This time, biker boots. Guests had been asked to bring a mischief item, which was apparently a bit of a stymying task. I understood. I, too, wasn’t sure what to bring, and it occurred to me that so much of mischief is born in context. But, in the end, we each decided upon something. And I put the items in a poem that I’ll keep writing, as I tour the U.S. for more Mischief Cafés. Here is the beginning:

a red ribbon, a wet
whistle,
lipstick on a napkin,
a terracotta sheep.

Red wine in a bottle (causing possible mischief without),
a naughty kitty who needed a new home,
chocolates with liqueur… We had plans we never got to, like maybe making Jealous Poem Stacks. We did, however, read Ulysses and get a little teary-eyed (only to be laughing moments later as the music director humorously—and with a flourish—declared it to be another Dead Poet’s Society special).

In all, the evening was everything great poetry can be: touching, witty, awe-inspiring, mischievous, and never quite finished with possibilities. Like a good poem, I didn’t want to leave the experience. And, also like a good poem, it will stay with me. Make your own Mischief Café? Bring poetry home (or to the woods).