A drunkard. A poet. An editor. A reporter. A military man. An orphan. A lecturer. The father of the detective novel. The Shakespeare of America. A slanderer and libeler. The husband of a 13-year-old bride.

And a writer. Above all, a writer. We associate Edgar Allan Poe with 19th century gothic. His stories – “Fall of the House of Usher, ” “Twice-Told Tales, ” “Masque of the Red Death, ” “Murders in the Rue Morgue, ” among many others – are full of mystery, passion, horror, violence, death, and the supernatural. And yet his poems, especially “The Raven” and “Annabel Lee, ” made him famous in pre-Civil War America and established his literary reputation.

Poe has often been the subject of biographers and literary criticism. Now we have a new one, Edgar Allan Poe: The Fever Called Living, by Paul Collins, associate professor of English at Portland State University. This is not an exhaustive biography (117 pages, including appendices), but it is compact, succinct, and covers the main events of Poe’s life along with his literary works. It’s a fine introduction to an iconic American writer.

The book is all of five chapters, covering Poe’s early life with his theatrical parents and the well-to-do foster family he landed with; how and why he began to write; his years as a reporter and editor; how “The Raven” established him as a literary light; the highs and lows of his career (more a series of rises and falls over his working life); and then an almost surprising decline just as he was finally coming into his own.

Along the way, we find Walt Whitman, Henry Wadsworth Longfellow, James Fenimore Cooper, Washington Irving, William Cullen Bryant, Nathaniel Hawthorne, Herman Melville, and others. Collins places Poe in his cultural and literary context, providing a window into the literature of the 19th century. 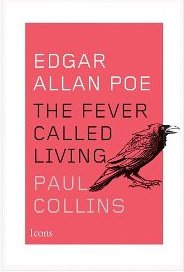 Collins is the author of several literary studies, including Duel with the Devil: The True Story of How Alexander Hamilton and Aaron Burr Teamed Up to Take On America’s First Sensational Murder Mystery; The Murder of the Century: The Gilded Age Crime That Scandalized a City & Sparked the Tabloid Wars; The Book of William: How Shakespeare’s First Folio Conquered the World; and The Trouble with Tom: The Strange Afterlife and Times of Thomas Paine; among others. Duel with the Devil was a finalist for the Edgar Award of the Mystery Writers of America. He is also the author of a memoir, Not Even Wrong: A Father’s Journey into the Lost History of Autism.

The biography does not include the full texts of any of Poe’s poems, but it does account for how the major works came to be written (and often reprinted without paying the author; such was the state of copyright laws at the time). Here’s a poem by Poe that is representative of much of the poetry he wrote.

In visions of the dark night
I have dreamed of joy departed—
But a waking dream of life and light
Hath left me broken-hearted.

Ah! what is not a dream by day
To him whose eyes are cast
On things around him with a ray
Turned back upon the past?

That holy dream—that holy dream,
While all the world were chiding,
Hath cheered me as a lovely beam
A lonely spirit guiding.

What though that light, thro’ storm and night,
So trembled from afar—
What could there be more purely bright
In Truth’s day-star?

Edgar Allan Poe: The Fever Called Living is an excellent introduction to a great American writer.

Featured photo by Daniele Zedda, Creative Commons, via Flickr. Post by Glynn Young, author of the novels Dancing Priest and A Light Shining, and Poetry at Work.