Until 2001, my mom thought our genealogy traced to England and Germany, but that year she and her brother discovered to their surprise that the ancestors they presumed were English actually came from Scotland. After tracing our family name to Kirkcudbright, where Robert Burns visited the Selkirk Inn and offered the famous “Selkirk Grace” (offered at the beginning of Burns Suppers), Mom began to refer to him as “Bobbie” Burns. Aye, once we knew we were Scottish, we felt a level of familiarity with Scotland’s national poet.

That year, Mom and her brother flew to Scotland and traipsed the countryside visiting cemeteries, museums, castles and libraries in search of more clues. Before long, they met distant relatives who called them “cousins” and welcomed them into their homes, shared stories, invited them to dinner and served them cookies.

While sitting behind a small church by the Kirkcudbright harbor, surrounded by “a host of golden daffodils, ” Mom wrote in her journal, “Are we drawn to this place because our roots are here? Or because it is so charming?” And my uncle felt such a draw to Scotland after that first trip, he returned many times over the years, staying for weeks at a time. He became such a regular, the locals greeted him by name when he stepped into the pub for a drink.

I’ve never been there myself, so I’ve had to find and form my connection to Scotland in other ways. The photos and stories my mom and uncle share provide a starting point, of course, but I’ve seen again and again how poetry crosses time and space to link heart and mind and place to person, so I recently perused the Scottish Poetry Library’s list of poets, in search of some links. The collection reminded me how many classic poets come from Scotland, such as Sir Walter Scott, Lord Byron, Robert Louis Stevenson, George MacDonald, and Sir Arthur Conan Doyle.

Scotland came to me on Poetry at Work Day, via Twitter, when the Scottish Parliament shared a poem by Edwin Morgan, written for opening of the Scottish Parliament building in 2004. And the Young Reporters for the Environment introduced me to several more contemporary Scottish poets, such as Hugh MacDiarmid, Sorley Maclean, and Iain Crichton Smith.

One of those mentioned, Norman MacCaig, offers a poetic glimpse of Scotland in his poem, “Assynt and Edinburgh”:

From the corner of Scotland I know so well
I see Edinburgh sprawling like seven cats
on its seven hills beside the Firth of Forth.

And when I’m in Edinburgh I walk
amongst the mountains and lochs of that corner
that looks across the Minch to the Hebrides.

Two places I belong to as though I was born
in both of them.

They make every day a birthday,
giving me gifts wrapped in the ribbons of memory.
I store them away, greedy as a miser. Robert Louis Stevenson penned this poem far from his homeland, remembering the land of his birth.

To S. R. Crockett (On receiving a Dedication)

Blows the wind to-day, and the sun and the rain are flying,

Blows the wind on the moors to-day and now,

Where about the graves of the martyrs the whaups are crying,

My heart remembers how!

Grey recumbent tombs of the dead in desert places,

Hills of sheep, and the howes of the silent vanished races,

And winds, austere and pure:

Be it granted me to behold you again in dying,

Hills of home! and to hear again the call;

Hear about the graves of the martyrs the peewees crying,

And hear no more at all.

But “Bobbie” Burns is the one I feel I must attend to, and I’m sorry I missed the Burns Supper hosted by our local Scottish Society here in the States to commemorate Burns Night, January 25. I’m reminded Burns penned the poem we sing on New Year’s Eve, Auld Lang Syne and the classic poem “A Red, Red Rose”:

As fair are thou, my bonie lass,
So deep in luve am I;
And I will luve thee still, my Dear,
Till a’ the seas gang dry.

Till a’ the seas gang dry, my Dear,
And the rocks melt wi’ the sun:
I will luve thee still, my dear,
While the sands o’ life shall run.

Lingering on the lochs and moors of Scotland, if only through verse, I sense the love of the land and language, the pride in the people and poets. Then I stumble on this brief poem from George MacDonald, and I hear the words all the way from Scotland, across time and space, linking poet and place to person.

The Shortest and Sweetest of Songs 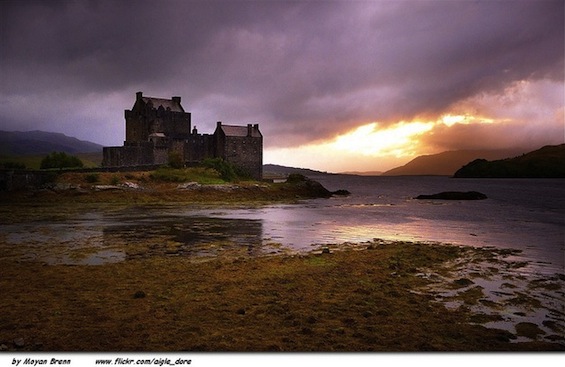