There was poetry at work over about 25 years in the 19th century, as three events helped create the Christmas holiday celebration we know today. One was Charles Dickens and his series of Christmas stories, beginning with A Christmas Carol. Second was Queen Victoria’s embrace of the Christmas tree as a holiday tradition. But before both of those, and across the Atlantic, was a poem.

In 1822,  Clement Moore, the son of a clergyman and soon to become a professor at a theological seminary, wrote a poem for his children. And he recited it to them. Word spread, and the following year “A Visit from St. Nicholas” was published in a newspaper. We know it better by its first line, “’Twas the night before Christmas.” The poem became widely known and included in anthologies, volumes of poetry, holiday publications, and newspaper articles. Various versions of the poem have been produced over the years; a popular one for those of us born and raised in New Orleans and south Louisiana is The Cajun Night Before Christmas which my family can still convince me to read aloud, complete with Cajun accent, which I don’t have but can imitate fairly well (I will admit to being one-fourth Cajun from a genetic perspective).

Moore died in 1863 at his home in Rhode Island. He might be amused to know that contemporary grinches have undertaken to prove that others actually wrote the poem, that he was too religious to have such a jolly view of Christmas, and that the only thing that saved his personality was having children. 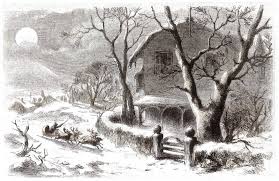 First, it is night work. St. Nicholas works the graveyard shift, when most of the rest of us are asleep. Instead of cookies and hot chocolate, we should leave St. Nick a Starbucks triple espresso.

Second, St. Nicholas is noisy. He and his miniature sleigh and reindeer may be small, but they are loud. They arrive with a clatter, noisy enough to wake everyone except the children.

Third, he’s fast, or as Moore says, “lively and quick.” I suppose it’s a requirement of the job. Think of all the homes that have to be visited.

Fourth, he knows his work team by name. He refers to each of them individually and personally, especially since he’s giving them instructions on how to land on the roof. (The noise continues, of course, on the roof with all that prancing and dancing and stomping.) Fifth, the job requires working in hazardous conditions, and one has to wonder why a complaint has never been filed with the Occupational Safety & Health Administration. Sliding down a chimney indeed! And likely having to dodge smoke, fumes, and fire! No wonder his clothes are tarnished, and likely a new uniform is needed each year. And it was all fur, none of this red material. Moore points out that he looked like a peddler (a profession that’s nearly disappeared).

Sixth, he is no role model. He puffs away at his pipe, not realizing that most workplaces today have banned indoor smoking. (The 1820s must have been a more lenient time.)

Seventh, he may be shouting at reindeer outside, but inside St. Nicholas works silently and quickly. His work is over and done with in a flash.

Eighth, he leaves the same way he came—the chimney. That’s twice he faces hazardous conditions on the job.

Ninth, he leaves with a sense of style and panache, exclaiming to all within hearing to have a good night and a happy Christmas. (Today he would be legally required to say “Happy Holiday” or “Enjoy your WinterFest.”)

Tenth, work in the 1820s, even the work of Christmas, was harder. We’d never allow airplane pilots today to work those kinds of hours.

Simpler, yes. Harder, yes. But the heart of the work—the excitement of Christmas—is still very much with us.

A Visit from St. Nicholas

’Twas the night before Christmas, when all through the house
Not a creature was stirring, not even a mouse;
The stockings were hung by the chimney with care,
In hopes that St. Nicholas soon would be there;
The children were nestled all snug in their beds;
While visions of sugar-plums danced in their heads;
And mamma in her ’kerchief, and I in my cap,
Had just settled our brains for a long winter’s nap,
When out on the lawn there arose such a clatter,
I sprang from my bed to see what was the matter.
Away to the window I flew like a flash,
Tore open the shutters and threw up the sash.
The moon on the breast of the new-fallen snow,
Gave a lustre of midday to objects below,
When what to my wondering eyes did appear,
But a miniature sleigh and eight tiny rein-deer,
With a little old driver so lively and quick,
I knew in a moment he must be St. Nick.
More rapid than eagles his coursers they came,
And he whistled, and shouted, and called them by name:
“Now,  Dasher! now,  Dancer! now Prancer and Vixen!
On,  Comet! on,  Cupid! on,  Donder and Blixen!
To the top of the porch! to the top of the wall!
Now dash away! dash away! dash away all!”
As leaves that before the wild hurricane fly,
When they meet with an obstacle, mount to the sky;
So up to the housetop the coursers they flew
With the sleigh full of toys, and St. Nicholas too—
And then, in a twinkling, I heard on the roof
The prancing and pawing of each little hoof.
As I drew in my head, and was turning around,
Down the chimney St. Nicholas came with a bound.
He was dressed all in fur, from his head to his foot,
And his clothes were all tarnished with ashes and soot;
A bundle of toys he had flung on his back,
And he looked like a peddler just opening his pack.
His eyes—how they twinkled! his dimples, how merry!
His cheeks were like roses, his nose like a cherry!
His droll little mouth was drawn up like a bow,
And the beard on his chin was as white as the snow;
The stump of a pipe he held tight in his teeth,
And the smoke, it encircled his head like a wreath;
He had a broad face and a little round belly
That shook when he laughed, like a bowl full of jelly.
He was chubby and plump, a right jolly old elf,
And I laughed when I saw him, in spite of myself;
A wink of his eye and a twist of his head
Soon gave me to know I had nothing to dread;
He spoke not a word, but went straight to his work,
And filled all the stockings; then turned with a jerk,
And laying his finger aside of his nose,
And giving a nod, up the chimney he rose;
He sprang to his sleigh, to his team gave a whistle,
And away they all flew like the down of a thistle.
But I heard him exclaim, ere he drove out of sight—
“Happy Christmas to all, and to all a good night!”

Image by filtran. Sourced via Flickr. Post by Glynn Young, author of the novels Dancing Priest and A Light Shining, and the just-published Poetry at Work (T. S. Poetry Press).

Buy the book  Poetry at Work 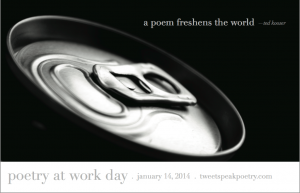