In June, poet Anne Overstreet published her first collection of poems, entitled Delicate Machinery Suspended: Poems. It is about memory and faith, affection and love, work done and work done well, and even playfulness. The poems are about a life observed, but also a life to come. It’s a beautiful work. 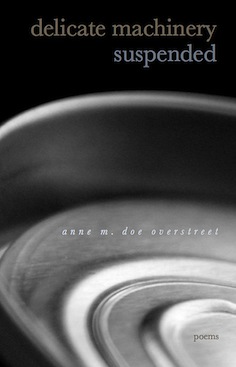 Anne’s poems have been published in the Asheville Poetry Review, Radix, DMQ Review, Relief, Talking River Review and several other publications. She is a Soapstone Resident and a two-time Pushcart Prize nominee. She’s conducted a number of workshops, and her poetry has appeared as part of the Cody Center Exhibition “Pairings” at Laity Lodge in Texas. She lives near Seattle with her husband, author and film critic Jeffrey Overstreet.

We talked with Anne about her poetry, her background and experiences, and the influences on her writing.

Your “home place” — New Mexico — plays an important role in your poems. Can you tell us a little about your background and growing up there?

We actually relocated to Roswell when I was 12 and I remember driving cross-country in the yellow Oldsmobile, muttering under my breath that I was going to hate it hate it hate it there. Now I can’t imagine feeling as connected to any other place the same way. You’re walking on the skin of the earth, moving through the heavens where it touches down. I imagine God breathing and this place is that held space between inhalation and exhalation. Such subtle beauty—you have to be alert to catch spring slipping quietly along the rivers, spilling green across the plains. I used to lie on the ground at Salt Creek and could swear I felt the earth turning. There’s no place like it.

Prior to New Mexico, we moved a fair bit because my dad was in the Army when we were young. Mostly parts of Virginia. Certain rituals provided continuity across the states and into Roswell, where my parents still live. Reading as a family was one. Camping in the mountains. Sundays were for church and feeding people.

In the Acknowledgements, you cite Luci Shaw and several others for helping you be a better writer. How did they do that?

Luci advocates for confidence in one’s work, one’s own voice. I’d say she was my poetic fairy godmother, but I’m not sure godmothers have tattoos and sport leather jackets. Linda has one of the clearest senses of vision I’ve ever encountered and has leant me her eye when I needed it. Stacey listens. Then she tells me what she’s heard, how she experiences what I’ve written. She doesn’t read a lot of poetry—she’s in my sci-fi/fantasy cohort— and she has a fresh ear. Plus, she’s a mean cook. And everyone needs someone who helps make room for you to get your work done, who protects that space. She does that. Derek has been a mentor and a teacher for years. I learn from his work every time I encounter it. There is a balance to every piece he writes that I’d like to achieve. He also sets the bar high for intelligent critique, something I hope I have learned from, and he never hesitates to give his support any time it is asked for.

Who are some of your favorite writers and poets?

Oh that’s an extensive list that is perpetually expanding! Annie Dillard—everything. I will also read anything Kathleen Norris writes. Mark Helprin’s Winter’s Tale is at the top of the list, as is much of Guy Gavriel Kay’s work, Patricia McKillip’s novels, and the Auralia’s Thread books (yep, I’m a fan of Jeffrey’s work). I’m a big fantasy and fairy tale buff and these authors write gorgeous prose, lyrical and surprising. The kind that stuns you, pulls you under and out into a different state of being.

Poetry, hmm, Pattiann Rogers, Maxine Kumin, Jane Hirschfiedl, Zbiegneiw Herbert, Adam Zagejewski (I particularly like the Polish poets of that period), to begin with. Rogers does this exquisite blending of the divine and science that celebrates fact and design, and yet holds something wild in it. Two of my northwest favorites are Derek Sheffield, whose work is keen, swift, and well-balanced, and Kevin Miller, who, though he has only a few collections out, does place so well. There is a reverence too for the holiness of the ordinary in his poems. These are writers I am in conversation with, at least on page, who I learn from, whose work elicits a response or a question every time I encounter it.

Many of the poems read like a movie camera filming a scene, then shifting to another scene, and then another, effectively (very effectively) combining three or four scenes into a cohesive whole, like in “If It Doesn’t Rain Soon.” Is film/movies an influence here?

You’d expect me to say yes, since my husband Jeffrey is a film critic. And the films I am most drawn to are often image heavy. However, I do think that is a consequence, not a cause or influence. As an undergraduate I studied history and loved reading various texts on one subject, looking at the event from differing perspectives to apprehend the whole. I think I still do that in my poetry.

Faith plays a strong role in your poetry, even when it’s subtle and understated. It’s straightforward in poems like “The Logic of Prayer Rising” and “Annunciation: Triptych” (two of my favorites in the collection) and “The Bearded Lady, Asleep, ” but it’s present throughout the poems, which seem to suggest a belief in the order and purpose of things. How would you describe it?

It informs the way I see. Because of it, it is clear to me that we move through a designed world. Moreover, the designer seems so obviously to delight in artistry and variation, in evolutionary innovation. Scientists have recently discovered a shark whose underbelly mimics patterns of light falling through water so that it is virtually invisible from below. How cool is that? We keep discovering. Creation keeps unfolding. God continues to speak it into being, a proper artist.

My faith also gives me permission to ask questions. Scott Cairns talks about poetry being a continuing conversation, a response or reaction perhaps to the poetic tradition. Writing’s my way of engaging with my faith tradition. What do we do with apparent anomalies, like a person who appears to be both male and female, as in “The Bearded Lady”? How could Mary be the same after having been overshadowed by the same spirit that overshadowed the waters and drew the land masses up out of the deep? That sort of thing.

Maybe I am not entitled to answers, but I am free to ask. And ask and ask. Job is a favorite text, as are some of the Psalms. I think we’re supposed to raise questions as part of the conversation, even in the face of doubt, perhaps especially in the face of silence.

At The High Calling, Anne talks about how she came to write poetry, how various jobs she’s held influenced her writing, and how she uses details to make her poems so powerful.

At Faith, Fiction, Friends, Anne discusses some of the specific poems in the collection.

You can read a review of Delicate Machinery Suspended: Poems here at TweetSpeak Poetry.