Pablo Neruda was the pen name of Neftali Ricardo Reyes Basoalto (1904-1973), a Chilean poet and diplomat whom Gabriel Garcia Marquez called “the great poet of the 20th century in any language.” The article on him at Wikipedia contains a wealth of information about his life, family, involvement in the Spanish Civil War, embrace and later rejection of Stalinism, the speech he made in Chile in 1948 which forced him into hiding and then exile, and many other facets of his life. The Poetry Foundation also has a good profile on the poet, as does poets.org.

An interesting note: the 1994 Italian movie Il Postino (The Postman) is a story of how a postman’s life is changed when he strikes up a friendship with a poet in exile on Sardinia – and that poet is Pablo Neruda, who indeed spent several years of exile there.

The author of numerous works of poetry, Neruda received the Nobel Prize for Literature in 1971. This poem is taken from 100 Love Sonnets, or Cien sonetos de amor, which Neruda dedicated to his wife, Matilde Urrutia (the poems were translated by Stephen Tapscott and published by the University of Texas Press).

Maybe you’ll remember that razor-faced man
who slipped out from the dark like a blade
and – before we realized – knew what was there:
he saw smoke and concluded fire.

The pallid woman with black hair
rose like a fish from the abyss,
and the two of them built up a contraption,
armed to the teeth, against love.

Man and woman, they felled mountains and gardens,
they went down to the river, the scaled the walls,
they hoisted their atrocious artillery up the hill.

Then love knew it was called love.
And when I lifted my eyes to your name,
Suddenly your heart showed me my way. 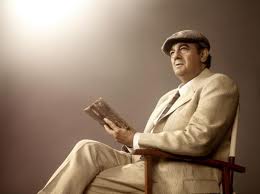