Sara Teasdale (1884-1933) was born and raised in St. Louis, and won numerous recognitions for her poetry, including the Pulitzer Prize. She was in love with poet Vachel Lindsay, but married someone else, a local St. Louis businessman. She later divorced her husband but never married Lindsay. Lindsay (1879-1931) was born in Springfield, Illinois, and became known as the “Prairie Troubadour” for his exploration of Midwestern themes in his poetry. He committed suicide in 1931, and Teasdale did the same two years later. It seemed fitting to feature the two of them together today for National Poetry Month.

Hushed in the smoky haze of summer sunset,
When I came home again from far-off places,
How many times I saw my western city
Dream by her river.

Then for an hour the water wore a mantle
Of tawny gold and mauve and misted turquoise
Under the tall and darkened arches bearing
Gray, high-flung bridges.

Against the sunset, water-towers and steeples
Flickered with fire up the slope to westward,
And old warehouses poured their purple shadows
Across the levee.

High over them the black train swept with thunder,
Cleaving the city, leaving far beneath it
Wharf-boats moored beside the old side-wheelers
Resting in twilight.

From Flame and Shadow (1920) by Sara Teasdale 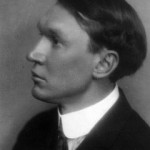 It is portentous, and a thing of state
That here at midnight, in our little town
A mourning figure walks, and will not rest,
Near the old court-house pacing up and down,

Or by his homestead, or in shadowed yards
He lingers where his children used to play,
Or through the market, on the well-worn stones
He stalks until the dawn-stars burn away.

A bronzed, lank man! His suit of ancient black,
A famous high top-hat and plain worn shawl
Make him the quaint great figure that men love,
The prairie-lawyer, master of us all.

He cannot sleep upon his hillside now.
He is among us: — as in times before!
And we who toss and lie awake for long
Breathe deep, and start, to see him pass the door.

His head is bowed. He thinks on men and kings.
Yea, when the sick world cries, how can he sleep?
Too many peasants fight, they know not why,
Too many homesteads in black terror weep.

The sins of all the war-lords burn his heart.
He sees the dreadnaughts scouring every main.
He carries on his shawl-wrapped shoulders now
The bitterness, the folly and the pain.

He cannot rest until a spirit-dawn
Shall come; — the shining hope of Europe free:
The league of sober folk, the Workers’ Earth,
Bringing long peace to Cornland, Alp and Sea.

It breaks his heart that kings must murder still,
That all his hours of travail here for men
Seem yet in vain. And who will bring white peace
That he may sleep upon his hill again?

For its Poem-A-Day, the Academy of American Poets posted “Small Talk” By Eleanor Lerman, taken from her book The Sensual World Re-emerges: Poems.

Maureen Doallas at Writing Without Paper continues her series on state poet laureates with a post on Ruth Stone, Vermont’s poet laureate.

If you have a poem or know a good resource or like a poetry site, drop the link in the comments and we’ll feature it the next day.