In the greenest of our valleys
By good angels tenanted,
Once a fair and stately palace—
Radiant palace—reared its head.
In the monarch Thought’s dominion—
It stood there!
Never seraph spread a pinion
Over fabric half so fair!

Banners yellow, glorious, golden,
On its roof did float and flow,
(This—all this—was in the olden
Time long ago),
And every gentle air that dallied,
In that sweet day,
Along the ramparts plumed and pallid,
A winged odor went away.

Wanderers in that happy valley,
Through two luminous windows, saw
Spirits moving musically,
To a lute’s well-tunëd law,
Bound about a throne where, sitting
(Porphyrogene!)
In state his glory well befitting,
The ruler of the realm was seen.

And all with pearl and ruby glowing
Was the fair palace door,
Through which came flowing, flowing, flowing,
And sparkling evermore,
A troop of Echoes, whose sweet duty
Was but to sing,
In voices of surpassing beauty,
The wit and wisdom of their king.

But evil things, in robes of sorrow,
Assailed the monarch’s high estate.
(Ah, let us mourn!—for never morrow
Shall dawn upon him desolate !)
And round about his home the glory
That blushed and bloomed,
Is but a dim-remembered story
Of the old time entombed.

And travellers, now, within that valley,
Through the red-litten windows see
Vast forms, that move fantastically
To a discordant melody,
While, like a ghastly rapid river,
Through the pale door
A hideous throng rush out forever
And laugh—but smile no more. 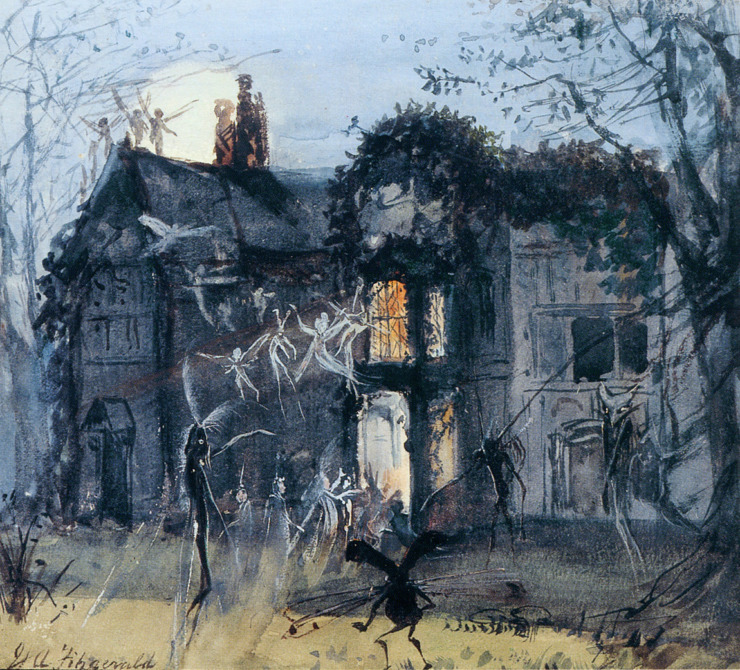 Listen to Readings of “The Haunted Palace”

That’s it for readings of The Haunted Palace by Edgar Allan Poe!

I hope you enjoyed The Haunted Palace by Edgar Allan Poe!