Despite what the professors would have us believe, average Americans once loved poetry.”

A friend sent me a link to an interview with former California Poet Laureate Dana Gioia. In it he recalls his mother, whom he describes as “a working-class Mexican-American woman born in poverty,” reading and reciting poetry to him when he was a child. One of the poems she knew by heart was Edgar Allan Poe’s “Annabel Lee.”

Literally the day after I read the article, “Annabel Lee” appeared at Every Day Poems. Surely it was a sign that I needed to learn it by heart too.

It is the longest poem I’ve attempted, but since it’s also a ballad, I figured it would repeat enough to make it learnable. I was correct. The poem begs to be recited aloud, around a roaring campfire while a chilly wind that is actually the ghost of a dead woman attempts to blow out the flames.

It was many and many a year ago,

In a kingdom by the sea,

That a maiden there lived whom you may know

By the name of Annabel Lee;

And this maiden she lived with no other thought

Than to love and be loved by me.

But we loved with a love that was more than love—

I and my Annabel Lee—

With a love that the wingèd seraphs of Heaven

Coveted her and me.

And this was the reason that, long ago,

A wind blew out of a cloud, chilling

So that her highborn kinsmen came

And bore her away from me,

To shut her up in a sepulchre

In this kingdom by the sea.

The angels, not half so happy in Heaven,

Went envying her and me—

Yes!—that was the reason (as all men know,

In this kingdom by the sea)

That the wind came out of the cloud by night,

Chilling and killing my Annabel Lee.

But our love it was stronger by far than the love

Of those who were older than we—

Of many far wiser than we—

And neither the angels in Heaven above

Nor the demons down under the sea

Can ever dissever my soul from the soul

For the moon never beams, without bringing me dreams

And the stars never rise, but I feel the bright eyes

And so, all the night-tide, I lie down by the side

In her sepulchre there by the sea—

In her tomb by the sounding sea.

When I told a friend I was memorizing this poem, she said it’s one she learned in school and loved. I neither love it nor hate it. Let’s just say I have so many questions.

• The speaker says you “lived with no other thought / Than to love and be loved by me.” Really? You never said, “I’m rather handy with a dagger,” or “Look at my new dress,” or “More tea, por favor”?

• The poem says you were both children — can I get an age? Were you child-like or actually a minor when you became a bride?

• If a wind chilled and killed you, exactly how long were you outside, and why is there no mention of blizzards or sub-zero temps? Did you have an underlying medical condition?

• At the end of the poem, is your fella actually there in the tomb with you?

• You do realize you two sound like every pair of teenage lovebirds, ever, right?

Questions (and joking) aside, I enjoyed many small details that shift through the poem. I like how at first it’s “a wind” that “blew” out of “a cloud,” and then later it’s “the wind” that “came” out of “the cloud,” and it comes “by night,” not only “chilling” but “chilling and killing my Annabel Lee.”

It is also extremely pleasing to say these four lines: “And neither the angels in Heaven above /  Nor the demons down under the sea / Can ever dissever my soul from the soul / Of the beautiful Annabel Lee.” Perhaps parents should consider whether their children’s names have as much poetic potential as the four syllables that comprise the immortal Annabel Lee.

The poem was Poe’s last, published in 1849, after his death. Much ink has been spilled trying to determine who Annabel Lee was, to which I say, she’s the woman in the poem. The poem has inspired novelists, painters, and has been made into several songs, including one by Radio Futura, a Spanish group popular in the ‘80s. It’s also inspired average Americans who learned it and recited it to their children.

As I sit with this poem, I hear ocean waves. They sound like the waves in Playa del Carmen, Mexico, where the photo that is my avatar was taken, on a vacation for our 20th anniversary. Actually, it was only the 17th year of our marriage, but it was the 20th anniversary of our meeting, when I was 18, and he was 19. We were such children then. 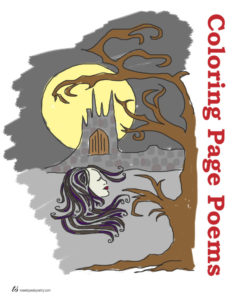 Did you memorize “Annabel Lee” this month? Join our By Heart community and share your audio or video using the hashtags #ByHeart and #MemoriesWithFriends and tagging us @tspoetry. We also welcome photos of your handwritten copy of the poem.

Also, if you’d like to take some more time with this poem, Tweetspeak has a coloring page for you.

By Heart for June

For the next By Heart gathering, which meets on June 28, just a few days past the summer solstice, we’ll memorize “The Star” by Jane Taylor. You probably already know the first four lines, which begin, “Twinkle, twinkle, little star.”

Twinkle, twinkle, little star,
How I wonder what you are!
Up above the world so high,
Like a diamond in the sky.

When the blazing sun is gone,
When he nothing shines upon,
Then you show your little light,
Twinkle, twinkle, all the night.

Then the trav’ller in the dark,
Thanks you for your tiny spark,
He could not see which way to go,
If you did not twinkle so.

In the dark blue sky you keep,
And often through my curtains peep,
For you never shut your eye,
Till the sun is in the sky.

As your bright and tiny spark,
Lights the trav’ller in the dark—
Though I know not what you are,
Twinkle, twinkle, little star.