Kind solace in a dying hour!
Such, father, is not (now) my theme—
I will not madly deem that power
Of Earth may shrive me of the sin
Unearthly pride hath revelled in—
I have no time to dote or dream:
You call it hope—that fire of fire!
It is but agony of desire:
If I can hope—O God! I can—
Its fount is holier—more divine—
I would not call thee fool, old man,
But such is not a gift of thine.

Know thou the secret of a spirit
Bowed from its wild pride into shame
O yearning heart! I did inherit
Thy withering portion with the fame,
The searing glory which hath shone
Amid the Jewels of my throne,
Halo of Hell! and with a pain
Not Hell shall make me fear again—
O craving heart, for the lost flowers
And sunshine of my summer hours!
The undying voice of that dead time,
With its interminable chime,
Rings, in the spirit of a spell,
Upon thy emptiness—a knell.

I have not always been as now:
The fevered diadem on my brow
I claimed and won usurpingly—
Hath not the same fierce heirdom given
Rome to the Cæsar—this to me?
The heritage of a kingly mind,
And a proud spirit which hath striven
Triumphantly with human kind.
On mountain soil I first drew life:
The mists of the Taglay have shed
Nightly their dews upon my head,
And, I believe, the winged strife
And tumult of the headlong air
Have nestled in my very hair.

So late from Heaven—that dew—it fell
(‘Mid dreams of an unholy night)
Upon me with the touch of Hell,
While the red flashing of the light
From clouds that hung, like banners, o’er,
Appeared to my half-closing eye
The pageantry of monarchy;
And the deep trumpet-thunder’s roar
Came hurriedly upon me, telling
Of human battle, where my voice,
My own voice, silly child!—was swelling
(O! how my spirit would rejoice,
And leap within me at the cry)
The battle-cry of Victory!

The rain came down upon my head
Unsheltered—and the heavy wind
Rendered me mad and deaf and blind.
It was but man, I thought, who shed
Laurels upon me: and the rush—
The torrent of the chilly air
Gurgled within my ear the crush
Of empires—with the captive’s prayer—
The hum of suitors—and the tone
Of flattery ’round a sovereign’s throne.

My passions, from that hapless hour,
Usurped a tyranny which men
Have deemed since I have reached to power,
My innate nature—be it so:
But, father, there lived one who, then,
Then—in my boyhood—when their fire
Burned with a still intenser glow
(For passion must, with youth, expire)
E’en then who knew this iron heart
In woman’s weakness had a part.

I have no words—alas!—to tell
The loveliness of loving well!
Nor would I now attempt to trace
The more than beauty of a face
Whose lineaments, upon my mind,
Are—shadows on th’ unstable wind:
Thus I remember having dwelt
Some page of early lore upon,
With loitering eye, till I have felt
The letters—with their meaning—melt
To fantasies—with none.

O, she was worthy of all love!
Love as in infancy was mine—
‘Twas such as angel minds above
Might envy; her young heart the shrine
On which my every hope and thought
Were incense—then a goodly gift,
For they were childish and upright—
Pure—as her young example taught:
Why did I leave it, and, adrift,
Trust to the fire within, for light?

We grew in age—and love—together—
Roaming the forest, and the wild;
My breast her shield in wintry weather—
And, when the friendly sunshine smiled.
And she would mark the opening skies,
I saw no Heaven—but in her eyes.
Young Love’s first lesson is——the heart:
For ‘mid that sunshine, and those smiles,
When, from our little cares apart,
And laughing at her girlish wiles,
I’d throw me on her throbbing breast,
And pour my spirit out in tears—
There was no need to speak the rest—
No need to quiet any fears
Of her—who asked no reason why,
But turned on me her quiet eye!

Yet more than worthy of the love
My spirit struggled with, and strove
When, on the mountain peak, alone,
Ambition lent it a new tone—
I had no being—but in thee:
The world, and all it did contain
In the earth—the air—the sea—
Its joy—its little lot of pain
That was new pleasure—the ideal,
Dim, vanities of dreams by night—
And dimmer nothings which were real—
(Shadows—and a more shadowy light!)
Parted upon their misty wings,
And, so, confusedly, became
Thine image and—a name—a name!
Two separate—yet most intimate things.

I was ambitious—have you known
The passion, father? You have not:
A cottager, I marked a throne
Of half the world as all my own,
And murmured at such lowly lot—
But, just like any other dream,
Upon the vapor of the dew
My own had past, did not the beam
Of beauty which did while it thro’
The minute—the hour—the day—oppress
My mind with double loveliness.

We walked together on the crown
Of a high mountain which looked down
Afar from its proud natural towers
Of rock and forest, on the hills—
The dwindled hills! begirt with bowers
And shouting with a thousand rills.

I spoke to her of power and pride,
But mystically—in such guise
That she might deem it nought beside
The moment’s converse; in her eyes
I read, perhaps too carelessly—
A mingled feeling with my own—
The flush on her bright cheek, to me
Seemed to become a queenly throne
Too well that I should let it be
Light in the wilderness alone.

I wrapped myself in grandeur then,
And donned a visionary crown—
Yet it was not that Fantasy
Had thrown her mantle over me—
But that, among the rabble—men,
Lion ambition is chained down—
And crouches to a keeper’s hand—
Not so in deserts where the grand—
The wild—the terrible conspire
With their own breath to fan his fire.

Look ’round thee now on Samarcand!—
Is she not queen of Earth? her pride
Above all cities? in her hand
Their destinies? in all beside
Of glory which the world hath known
Stands she not nobly and alone?
Falling—her veriest stepping-stone
Shall form the pedestal of a throne—
And who her sovereign? Timour—he
Whom the astonished people saw
Striding o’er empires haughtily
A diademed outlaw!

O, human love! thou spirit given,
On Earth, of all we hope in Heaven!
Which fall’st into the soul like rain
Upon the Siroc-withered plain,
And, failing in thy power to bless,
But leav’st the heart a wilderness!
Idea! which bindest life around
With music of so strange a sound
And beauty of so wild a birth—
Farewell! for I have won the Earth.

When Hope, the eagle that towered, could see
No cliff beyond him in the sky,
His pinions were bent droopingly—
And homeward turned his softened eye.
‘Twas sunset: When the sun will part
There comes a sullenness of heart
To him who still would look upon
The glory of the summer sun.
That soul will hate the ev’ning mist
So often lovely, and will list
To the sound of the coming darkness (known
To those whose spirits hearken) as one
Who, in a dream of night, would fly,
But cannot, from a danger nigh.

What tho’ the moon—tho’ the white moon
Shed all the splendor of her noon,
Her smile is chilly—and her beam,
In that time of dreariness, will seem
(So like you gather in your breath)
A portrait taken after death.
And boyhood is a summer sun
Whose waning is the dreariest one—
For all we live to know is known,
And all we seek to keep hath flown—
Let life, then, as the day-flower, fall
With the noon-day beauty—which is all.
I reached my home—my home no more—
For all had flown who made it so.
I passed from out its mossy door,
And, tho’ my tread was soft and low,
A voice came from the threshold stone
Of one whom I had earlier known—
O, I defy thee, Hell, to show
On beds of fire that burn below,
An humbler heart—a deeper woe.

Father, I firmly do believe—
I know—for Death who comes for me
From regions of the blest afar,
Where there is nothing to deceive,
Hath left his iron gate ajar.
And rays of truth you cannot see
Are flashing thro’ Eternity——
I do believe that Eblis hath
A snare in every human path—
Else how, when in the holy grove
I wandered of the idol, Love,—
Who daily scents his snowy wings
With incense of burnt-offerings
From the most unpolluted things,
Whose pleasant bowers are yet so riven
Above with trellised rays from Heaven
No mote may shun—no tiniest fly—
The light’ning of his eagle eye—
How was it that Ambition crept,
Unseen, amid the revels there,
Till growing bold, he laughed and leapt
In the tangles of Love’s very hair! Front cover of Tamerlane and Other Poems by a Bostonian, the first published work of Edgar Allan Poe, 1827. 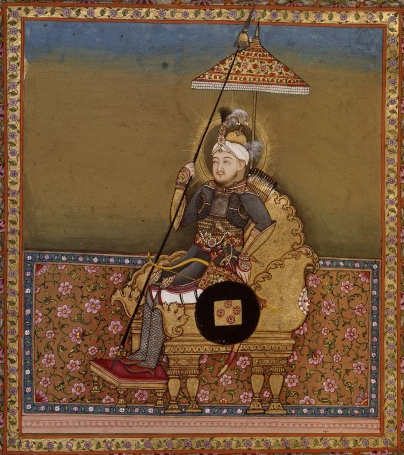 Portrait of Tamerlane by Smith-Lesouëf, 1774. The Lonely Road by Alexander Mann.

Listen to Readings of “Tamerlane”

Listen to this Musical Interpretation of “Tamerlane” by Edgar Allan Poe

That’s it for readings of Tamerlane by Edgar Allan Poe!

I hope you enjoyed Tamerlane by Edgar Allan Poe!