Enjoy some poems from the Kahlil Gibran Library. You can read all of The Madman. title image from the book Sand and Foam by Kahlil Gibran title image from the book The Madman: His Parables and Poems by Kahlil Gibran

The Madman: His Parables and Poems

How I Became A Madman

On Giving and Taking

On the Steps of the Temple

The Good God and the Evil God

Night and the Madman

Said A Blade of Grass

When My Sorrow Was Born

And When My Joy Was Born 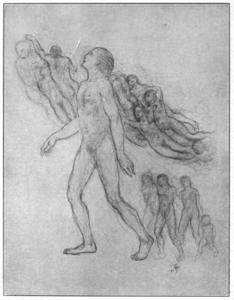 We hope you enjoyed browsing the Kahlil Gibran poems library!

“Self Portrait and Muse” by Kahlil Gibran

Kahlil Gibran (جبران خليل جبران) was a writer, visual artist, and poet with a prolific collection of work. He was born in 1883 in a village in the Mount Lebanon Mutasarrifate and in 1893 moved with his family to the United States where he enrolled in school in Boston, then went back home when he was fifteen to enroll in the Collège de la Sagesse. In 1902 he came back to Boston, and two years later his artwork was displayed for the first time. In 1905 he published his first book, and after that studied art in Paris for three years. Gibran wrote books in both Arabic and English, including poems, plays, fables, short stories, and political essays.

His cousin, Kahlil G. Gibran, a sculptor, described his work in this way. “Ignoring much of the traditional vocabulary and form of classical Arabic, he began to develop a style which reflected the ordinary language he had heard as a child in Besharri and to which he was still exposed in the South End [of Boston]. This use of the colloquial was more a product of his isolation than of a specific intent, but it appealed to thousands of Arab immigrants.” (Robin Waterfield, 1998) He was inspired by the King James Bible, the works of William Blake, whose drawings were in Gibran’s opinion “so far the profoundest things done in English.” (Joseph Ghougassian, 1973) Other inspirations included Francis Marrash (فرنسيس بن فتح الله بن نصر الله مرّاش), Walt Whitman, and Friedrich Nietzsche.

“Self Portrait and Muse” by Kahlil Gibran

With visual art Gibran worked in oils, pencil, ink, watercolor, and gouache, and created more than seven hundred pieces of visual art. His work is featured in a number of museums, and his work The Prophet has been translated into more than 100 languages and has never been out of print, becoming popular in the American counterculture and New Age movement. The book was admired by Elvis Presley, John Lennon, Johnny Cash, David Bowie, Gilad Hochman (גילעד הוכמן) and Dana Al Fardan. Gibran has museums, memorials, schools, a garden, and a crater on Mercury named after him.