In Heaven a spirit doth dwell
“Whose heart-strings are a lute;”
None sing so wildly well
As the angel Israfel,
And the giddy Stars (so legends tell),
Ceasing their hymns, attend the spell
Of his voice, all mute.

Tottering above
In her highest noon,
The enamoured Moon
Blushes with love,
While, to listen, the red levin
(With the rapid Pleiads, even,
Which were seven),
Pauses in Heaven.

And they say (the starry choir
And the other listening things)
That Israfeli’s fire
Is owing to that lyre
By which he sits and sings—
The trembling living wire
Of those unusual strings.

But the skies that angel trod,
Where deep thoughts are a duty—
Where Love’s a grow-up God—
Where the Houri glances are
Imbued with all the beauty
Which we worship in a star.

Therefore, thou art not wrong,
Israfeli, who despisest
An unimpassioned song;
To thee the laurels belong,
Best bard, because the wisest!
Merrily live and long!

The ecstasies above
With thy burning measures suit—
Thy grief, thy joy, thy hate, thy love,
With the fervor of thy lute—
Well may the stars be mute!

Yes, Heaven is thine; but this
Is a world of sweets and sours;
Our flowers are merely—flowers,
And the shadow of thy perfect bliss
Is the sunshine of ours.

If I could dwell
Where Israfel
Hath dwelt, and he where I,
He might not sing so wildly well
A mortal melody,
While a bolder note than this might swell
From my lyre within the sky. The Angel Israfel (on whom the poem is based) by Claude Buck, 1919. 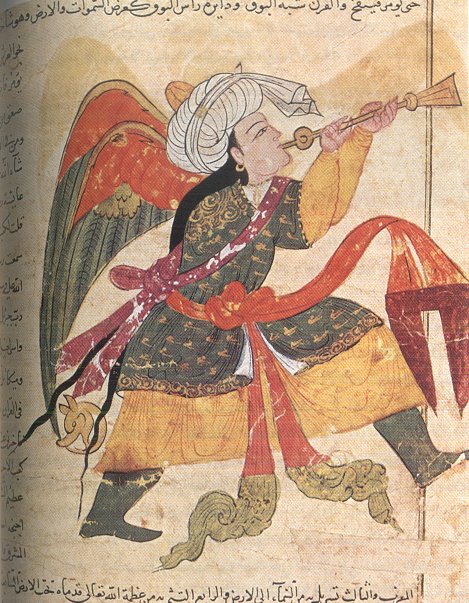 Listen to Readings of “Israfel”

Listen to Musical Interpretations of “Israfel” by Edgar Allan Poe

That’s it for readings of Israfel by Edgar Allan Poe!

I hope you enjoyed Israfel by Edgar Allan Poe!