“California embodies many of the ways we’ve dreamed to the end of the American continent.”

– back cover, Making Peace with Paradise Notice, in above list of state symbols, how many of them come with the word “California” as part of their name. That’s key to understanding California: its sense of exceptionalism. It’s a sense of, We don’t just have frogs; we have California red-legged frogs. If you come , we’ll make all your froggy dreams come true.

Despite California’s swagger, the state fabric is denim, which is surely the most ubiquitous, all-American fabric in the US of A. That tells us something else about California — if they have it, we want it. And to look in most American’s closets, we want a lot of denim.

Denim (specifically, denim jeans) originated during the Gold Rush. Levi Strauss, a German immigrant, moved to San Francisco and opened a dry goods store. He got into business with a Latvian immigrant and tailor named Jacob Davis. With patent number 139,121, jeans were born.

What began as a sturdy fabric for workers became a fashion icon and something most of us can’t imagine not wearing. The cotton that becomes denim is largely grown in the San Joaquin valley, and premium denim is produced in Southern California. Celebrities in movies and TV shows produced in Los Angeles model denim products, which we then purchase.

California is so influential because its biggest industries are also our country’s biggest industries, including agriculture (producing 12.5% of what we eat), banking (the biggest banks are not in New York), higher education, high tech, even shipping. If the state were a country, its gross domestic product would be the fifth largest in the world.

But not everyone feels the pull toward the Golden State. California native Tania Runyan felt pulled in the opposite direction. Her dreams leaned toward the American heartland, where she might make a Midwestern friend with the exotic name of … Jane.

I know someone born in the Central Valley whose dreams were more like Tania’s. She chose to go live in Texas. Years later her daughter moved in the opposite direction, out to LA. Her great-grandson just relocated to San Diego.

People all over this land are still dreamin’ about California. Most likely, they are wearing jeans.

Facing west from California’s shores,
Inquiring, tireless, seeking what is yet unfound,
I, a child, very old, over waves, towards the house of maternity,
the land of migrations, look afar,
Look off the shores of my Western sea, the circle almost circled;
For starting westward from Hindustan, from the vales of Kashmere,
From Asia, from the north, from the God, the sage, and the hero,
From the south, from the flowery peninsulas and the spice islands,
Long having wander’d since, round the earth having wander’d,
Now I face home again, very pleas’d and joyous,
(But where is what I started for so long ago?
And why is it yet unfound?)

Use any of the things you learned about California (research more, if you want!) and put one or more of them into a poem. If you like, weave in a little generosity. Share in the comments. 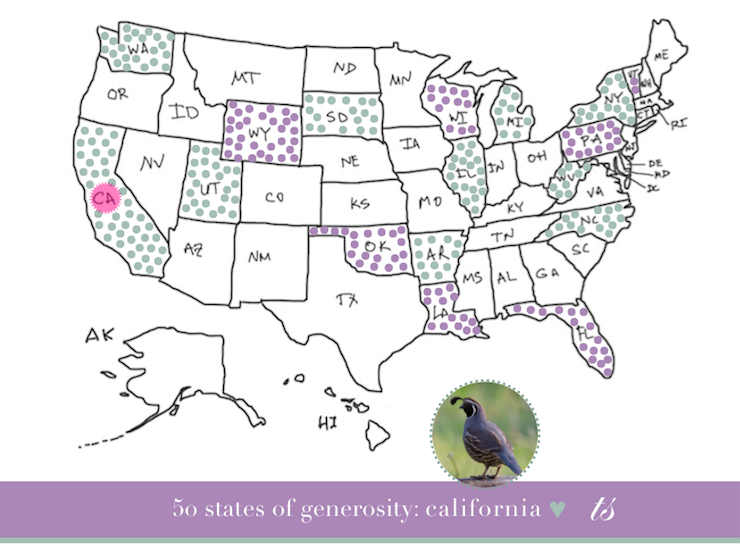