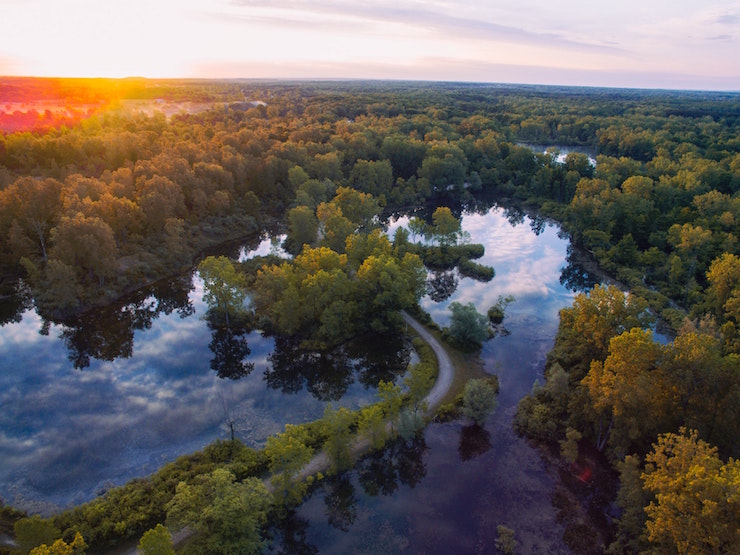 Michigan. Those were mystical times. An era of small pleasures.”

Patti Smith isn’t a Michigander, but she married her husband, Fred Sonic Smith, in Mariners’ Church of Detroit. For sixteen years this creative iconoclast lived a provincialish life and raised a family in Michigan, apart from the writing and drawing and music and photography for which she has been richly awarded. Her book M Train is an askew journey into the mystery of that time and the time since. It’s Pure Michigan.

Pure Michigan is the state tourism slogan, evoking the natural beauty of the Great Lakes State. It’s also called the Mitten State because the Lower Peninsula is shaped like a mitten. It’s connected to the Upper Peninsula (UP) by a giant suspension bridge, Mackinac Bridge. Who lives in the UP? Well, 90% of it is covered in trees, so trees, I guess. Also waterfalls — 150 of them. And a few Yoopers.

It’s no mystery that Michigan has a lot of water. Four of the five Great Lakes — Erie, Huron, Michigan, and Superior — give the mitten its shape. The state has the longest freshwater coastline in the U.S., with more than one hundred public beaches plus thousands of inland lakes. No matter where you are in Michigan, you are always within six miles of a body of water. One of the most-visited shores is the Sleeping Bear Dunes National Lakeshore, with its own legend. The Legend of Sleeping Bear by Kathy-Jo Wargin and illustrated by Gijsbert Van Frankenhuyzen is the state children’s book. In the story a forest fire in Wisconsin drives a mother bear and her cubs to swim across Lake Michigan to safety. Eventually the mother falls asleep at the top of the island and is covered with sand, waiting for the return of her cubs. It’s a sad tale, although the ending tries to redeem it when the cubs become the North and South Manitou Islands.

The book got me thinking about what other mysterious things exist in Michigan. Since the Great Lakes are the largest group of freshwater lakes in the world, it stands to reason there are many shipwrecks to discover. (And not just The Wreck of the Edmund Fitzgerald.)

There are also fairies. Urban Fairy Doors are located throughout downtown Ann Arbor. These tiny doors on the front of downtown businesses lead to fairy homes, even a fairy village.

And in the UP, there’s Bigfoot, presumably lured in by meat pasties. Also up there is the mysterious Paulding Light. Not to mention the Michigan Dogman.

But the biggest mystery of all is may be whatever happened to Jimmy Hoffa. He was president of International Brotherhood of Teamsters and was also involved in organized crime. He disappeared on July 30, 1975. Theories abound as to where he might be buried. Maybe the Dogman got him.

Recently Every Day Poems ran a Michigan poem that considers the mystery of a birthmark. Like all good mysteries, it doesn’t need to be solved, just savored, like a small pleasure.

Asked where I’m from,
I say Michigan made me
And touch the birthmark
Below the lifeline
Of my right hand.
Just here, under
The locked knuckles
Of the half-opened,
Half-cupped fist—
A stiff mitten
The map won’t fit;
Just here,
Down at the heel
Of the Indian “how”
(A little above
And slightly ahead of
The place where the thickened
Wrist cuts
And twists west).
And though the nuns said
“Thumbs up” in school,
I went ahead
Without a hitch,
And have only to put
My finger on it
To keep my place:
On almost-an-island,
Born with my life
In the palm of my hand.

– Len Krisak, from Say What You Will

Use any of the things you learned about Michigan (research more, if you want!) and put one or more of them into a poem. If you like, weave in a little generosity. Share in the comments.