For Edgar Gilmore with congratulations
and the best wishes always of another Edgar. 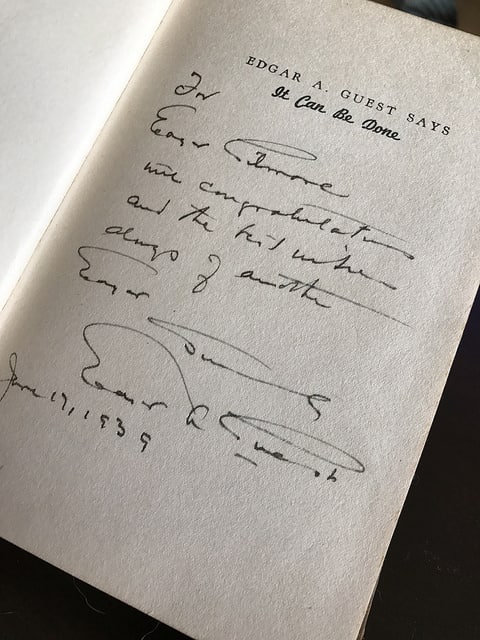 That’s the inscription inside Edgar A. Guest says: It Can Be Done, a book I found when we were packing up to move. I called my dad the other day. “Who was Edgar Gilmore?”

He didn’t know. My Aunt Esther, Dad’s sister, married a Gilmore. But we knew him as Uncle Bob. Could it have been Uncle Bob’s dad?

I found three other books by Guest in a box of stuff we inherited from my in-laws.

I called my sister-in-law to ask what the inscription in Rhymes of Childhood meant.

Dianne didn’t know. She would have only been a year old. She did tell me Grandma King was a big Guest fan. This book was obviously one that she passed on for whatever reason since she’d glued her own nameplate sticker on the front endpaper.

She also didn’t know when or why her mother had been penciled Dianne’s name next to a poem titled, “The Spirit of the Home” in The Passing Throng. The third verse was bracketed in pencil.

Home, you say, when the day is done,
Home to comfort and peace and rest;
Home, where the children roam and run—
There is the place that you love the best!
Yet what would the home be like if you
Had all of its endless tasks to do? My husband, though, said his sister would “never have won the Good Housekeeping award” and that he often invited visitors to peek into her bedroom much to his mom’s dismay. (Okay, so he now says he only did that once, when Great Aunt Edna visited from Philadelphia, and Dianne had ignored their mom’s pleas to clean her room. “This is Dianne’s room,” he announced as he swung wide the door. “Isn’t it a mess?” He says his mom laughed. I’m not so sure.) Maybe Mom King thought that poem was written “for” Dianne. Maybe she made her memorize at least that verse.

It’s likely that a lot of moms and dads marked up verses in Guest’s books. He wrote verses about everyday life that many could identify with.

Edgar Allen Guest was born August 20, 1881, in Birmingham, England. When he was about ten years old, the family moved to Detroit, Michigan——Wayne County, where I was born and spent my early years. Of course, it’s the largest county in Michigan, so I doubt the cousins and I would have run into him at Yankee’s corner store when we went down for candy.

The Detroit Free Press hired Guest as a part-time copy boy when he was about fourteen. When his dad died three years later, he dropped out of school and went to work full-time. He worked his way up to police beat reporter and then exchange editor—culling snippets from other publications. One day, instead of clipping a verse to print, he dared to write his own folksy poem and submit it to the Sunday editor. The paper published it on December 11, 1898, in their column titled Chaff. Guest was 17 years old. Eventually he had his own weekly column called Blue Monday and then a daily Breakfast Table Chat that was syndicated in over 300 newspapers and reached millions of people.

Guest and his brother Harry bought a case of type and self-printed 800 copies of Home Rhymes in 1909—the year my father-in-law was born. They printed Just Glad Things in 1911—the year my mother-in-law was born. Then Reilly and Britton began to publish Guest’s books at the rate of about one a year. All in all, he authored over 20 volumes of poetry and at least 11,000 poems. It Can Be Done is a collection of inspirational stories. The introduction describes how Guest took the train—always the same train—from Detroit to Chicago to rehearse (eight to ten hours) for his live half-hour weekly NBC radio broadcast, It Can Be Done. He kept that schedule for 11 years, from 1931-1942. In 1951, NBC televised a series called A Guest in Your Home. Guest was officially appointed as Michigan’s first Poet Laureate on March 25, 1952. He held that position until his death in 1959. He’d worked for the Free Press for 60 years and considered himself a “newspaperman who wrote verses.” He wrote in an exaggerated “stylized country dialect” about simple things that happened to him and his family, thinking that they probably happened to everyone else, too. He was known as “The People’s Poet.”

Although Michigan contributed two United States Poet Laureates—Philip Levine and Robert Hayden (the first non-white poet to serve), Michigan is one of five states currently without its own poet laureate. In fact, Guest was the first and only. Two different bills introduced since 2005 to establish the position seem to have stalled. In the meantime, the Upper Peninsula and cities in the Lower Peninsula like Grand Rapids and Lansing, recognizing the unique contributions of poetry, have established their own poet laureates.

Still wondering about Edgar Gilmore, I visited Ancestry.com to do a little sleuthing. It turns out my Aunt Esther got married to not Bob Gilmore but to Edgar Gilmore in 1942. I’ll never know why we called him Uncle Bob. There’s still the mystery of the inscription date, June 17, 1939. My uncle was born in 1922, so in 1939 he would have been 17, the same age Edgar Guest was when he dropped out of school to work full-time. Maybe Guest, the high school dropout, gave the commencement address at Uncle Bob’s high school that year. Maybe he also passed out copies of his book and then autographed them.

I’ll probably never know any of that for sure—but the book might still make a great graduation gift even today.

And a bit of trivia for you

Robert Redford’s directorial debut was for the movie Ordinary People in 1980. It starred Mary Tyler More, Judd Hirsch, Timothy Hutton, and Donald Sutherland, and was nominated for six Academy Awards. It won four of them as well as five Golden Globe awards. The movie was based on the 1976 novel written by Judith Guest—Eddie’s great-niece.

Not to be outdone, Sandra continues her Commit Poetry journey, reciting Guest’s “It Can Be Done”