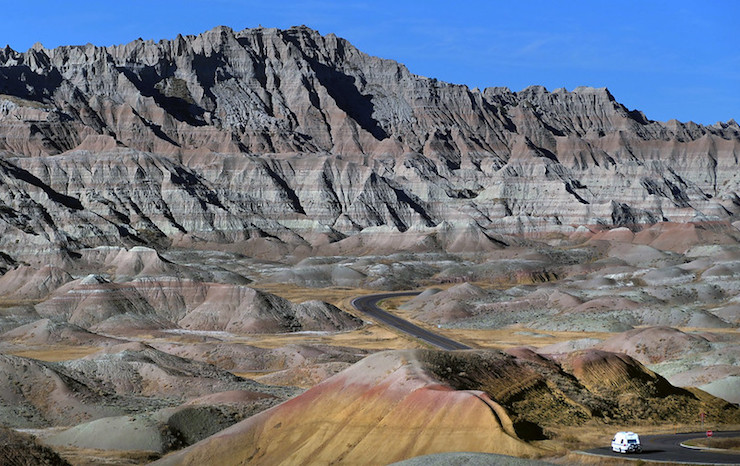 Summer means vacation. It’s time to check your tires and Go Great Places. So throw your bikes in the back of your vehicle and head to South Dakota, Land of Infinite Variety.

I only know two people who have vacationed in the land of The Mount Rushmore State, and they were both there for leisure involving wheels. Both loved it. One was on a bicycle trek, and the other attended a motorcycle rally. They raved about the wildness—the Black Hills, the Badlands, the world’s only Corn Palace.

If you prefer an active vacation, pushing your pedals while wearing your best kit, June is the time for RASDak, a ride across the state, featuring daily routes between 39 and 102 miles. But there are plenty of other weeks to ride the roads. There are also mountain bike trails, especially popular in the fall. And fat biking in the snow (“fat” refers to the wheel).

If you prefer a little gas in your two-wheeled machine, August is The Ride. The Roar. The Rally, aka the Sturgis Motorcycle Rally. This year will be the event’s 82nd rally, with around 500,000 in attendance.

What do these visitors want to see? Something they can’t find at home. Possibly the state animal, the coyote. Or to stumble upon the state fossil, the triceratops. Or to hear the state musical instrument, the fiddle. Or to sample the state bread, Navajo fry bread.

It’s also a place with strong Scandanavian ties, especially to Norway. There is lutefisk and lefse, which should be eaten “as Odin and Thor enjoyed theirs: lightly buttered, rolled.” Another Scandanavian, the sculptor Gutzon Borglum who was the son of Danish immigrants, is responsible for the one tourist attraction you’ve probably heard of in South Dakota: Mount Rushmore.

George Washington, Thomas Jefferson, Theodore Roosevelt, and Abraham Lincoln are right there, waiting for you. You can drive, bike, or ride on in. If you’re a member of the Blue Angels, you might get a chance to fly over. But some wheels must stay down: no drones allowed.

Why travel that far? Why wheel to a place unknown? To become, for a few days, out of place.

What I find
Is wild mustard
And the green, hills
Where foxes run or stand
In the cool grass.
They say it is a dream that passes,
A fever: I am out of place they say.

—from “Calentures,” from South Dakota, by Kathleen Norris

Use any of the things you learned about South Dakota (research more, if you want!), and put one or more of them into a poem. If you like, weave in a little generosity. Share in the comments.