As one viral Dracula book club participant noted on Tumblr (I saw this note via someone who, um, applied a little strong persuasion herself), peer pressure is not about substances legal and illegal…

… it’s about caving to the not-so-subtle invitation to join the Dracula Book Club and read the entire HUGE book one day at a time in your inbox—on the dates that the story “happened.” The project is run by Matt Kirkland, who did the same project last year with rather pale results. But this year, color me red! The inbox Dracula book club has gone positively viral (A positive? B positive? Not sure ;-).

And you can follow the funny (and sometimes irreverent) responses to each day’s readings via both Twitter and Tumblr. (Tumblr is more viral than Twitter, if you’re looking for the strongest book club bloodline.)

(Instagram is trailing behind at a ghostly pace, but you can find Dracula there, too.)

Seriously, I wasn’t going to peer pressure you into this, until I saw today’s lizard fanfare. Oh my.

See, today’s reading revealed that Dracula can climb down the walls of a stone castle face-down, cape billowing behind him—like a lizard. (Not that lizards have capes. But that they can climb sheer surfaces in any direction, little sucker-footed creatures that they are.) Get the classic novel Dracula delivered to your email inbox, as it happens.

Bram Stoker’s Dracula is an epistolary novel – it’s made up of letters, diaries, telegrams, newspaper clippings – and every part of it has a date. The whole story happens between May 3 and November 10. So: Dracula Daily will post a newsletter each day that something happens to the characters, in the same timeline that it happens to them.

Now you can read the book via email, in small digestible chunks – as it happens to the characters. No pressure, really. I just wanted you to know that this was out there in the world, going on. A bright spot in the literary community. Proof positive that classic books aren’t dead.

So if you’re in the mood for a bit of levity with your (mild) horror, come along and scale the story one little day at a time, in your inbox.

More About the Dracula Project Publisher, in His Own Words

“Dracula Daily is run by Matt Kirkland, as a part of Studio Kirkland, our family brand of silly side projects. I’m also a founder at Brand New Box, a digital product studio that builds new superpowers for teams.”

Photo by Cederic Vandenberghe on Unsplash. Post by L.L. Barkat. 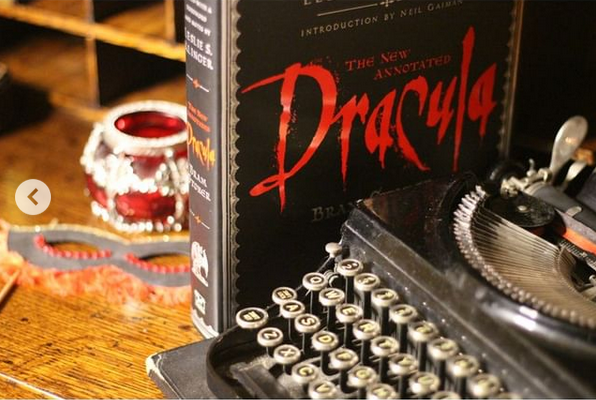 The illustrated Dracula with old typewriter—photo by Sara Barkat