Finalist!
$14.95Buy on KindleBuy Print on AmazonRead 3 of the Stories 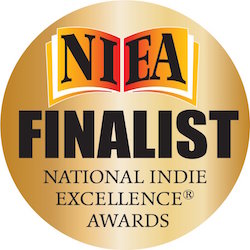 The Shivering Ground blends future and past, earth and otherworldliness, in a surreal collection that shimmers with art, philosophy, dance, film, and music at its heart.

A haunting medieval song in the mouth of a guard, an 1800s greatcoat on the shoulders of a playwright experiencing a quantum love affair, alien worlds both elsewhere and in the ruined water at our feet: these stories startle us with the richness and emptiness of what we absolutely know and simultaneously cannot pin into place.

In the tender emotions, hidden ecological or relational choices, and the sheer weight of a compelling voice, readers “hear” each story, endlessly together and apart.

The Shivering Ground is a National Indie Excellence Awards finalist.

What Readers Are Saying

“The word ‘original,’ as a compliment, is both overused and quite often misused. But sometimes it’s the only word that will do. Sara Barkat is an original. Her imagination is imperious; she wields words as she pleases, in ways that delight and unsettle. In this, she reminds me of Emily Dickinson. Reading her, I expect you will agree. Don’t miss the opportunity.”

“This is a captivating, word-rich book for readers who want to think, but not have all the answers.

The collection consists of 11 independent short stories that are somber, melancholy, at times tragic or even hopeless, but not depressing. Each piece is poised at the edge of the end of the world, in a different way; proposing a choice that must be made, or has just been made, and it is already too late to avert the consequences.

Using the short story format, Barkat weaves reality and fantasy together in a way that is subtle and surprising, and wonderfully evocative…

The writing at times reminds me of Ray Bradbury in his more contemplative and nostalgic moods. At other times, it calls to mind Italo Calvino in the way that the meticulous description of ordinary things triggers the sense that everything means more than it appears, and the world itself is just a signifier of some hidden pattern.”

“In this generous and surprising collection, enigmatic mysteries intrude upon an elegiac setting. A precocious protagonist discovers a dislocation from the every day. Media intrudes in multifarious forms, and inanimate objects or nature blend with the human elements in a well-orchestrated interplay of fantasy and gothic revelations.

They seethe with cognitive dissonance and pique with magical realism.

Written by an illustrator who brought to life the classic: “The Yellow Wallpaper”. I notice some eerie stylings, and influence from the dark short story which must have meant so much to this author. One of the primary concerns of many stories appears to be cinematic, or atmospheric, though they intrigue on the sentence level, seducing with their rich imagery and unexpected subtexts. They are tightly edited, deeply strange, bizarre, and uncanny all while striking me as vaguely familiar, like places visited in a dream. With literary references peeking from behind the scenes, at times domestic, and at others otherworldly, they will live long in memory…

Enigmatic beasts, exquisite use of rare and esoteric vocabulary, a vivid conjuring of unexpected wonders – all these things properly fit into what you will find here, this menagerie of quirky stories, but no descriptor can properly convey the breathless subtlety lurking under every line. Prepare for a dark descent into fantastically skewed worlds fraught with visions derived from an abundant understanding of dreamy fantasy. They are clever, inventive, and haunting. The author even tries out the second person perspective in the third story, and makes use of a host of other literary techniques to add flair and flavor to the already resplendent writing.

While a couple of the stories might ring as inconclusive, the majority of them are shiver-inducing, if not for their terror-strewn settings, then for their hypodermic-sharp symbolism. The unnerving humanness of mannikins, for instance, has never failed to creep me out. The inner whorls of the rose, the trickle of moonlight through a cracked window, faintly uttered sounds amid the gathering shadows. If you appreciate and delight in these things, then this collection will tickle your senses, set your imagination working like a live wire, jumpstart your lucid dreams and leave you reeling.”

“The prose style here is immaculate… Her style reminds me of some Victorian fiction: dense, with a broad vocabulary carefully deployed, often focused on fine descriptive detail. Sara Barkat is painting word-pictures, and she does it with considerable skill. Another reviewer likens the result to Emily Dickinson, and it’s not a bad comparison.

I very much enjoyed The Shivering Ground, and I’m going to be looking for more from Sara Barkat. Very highly recommended if you enjoy evocative science-fiction stories in a distinctive style.”