The Midnight Ball Is an Invitation

Confession: I did not learn to tell time using an analog clock until middle school. I learned in Spanish class, when we played a game, racing each other to learn our way around a clock en Español. I might have learned a bit earlier if I had owned Sara Barkat’s The Midnight Ball. Then I would have learned not only the twelve hours, but also the fifteen-minute mark, and, most importantly, 0:03. And instead of having to learn with a boring ol’ clock, I would have gotten to learn with illustrations of an antique timepiece. The Midnight Ball is about more than telling time. It’s a story about a girl named Song who receives an invitation to a midnight ball in a castle. Along her journey (by bicycle), she encounters various woodland animals, each wanting to come along and bring a gift to the party.

Some animals bring an item you might expect, like the “ruffly rabbit” who offers to bring a carrot. Some bring surprising gifts, like the “welcoming wolf” who brings a cupcake in a bell jar. (Maybe he’s a fan of Sylvia Plath.) If you’ve read Barkat’s graphic novel The Yellow Wallpaper (and if you haven’t, what are you waiting for?), you know her style. Barkat illustrated this story with her favorite Japanese fountain pen. It feels like stepping inside a fairy tale.

There’s something about pen-and-ink drawings that are an invitation. We can’t see the colors of the “darling dragonfly” or the “friendly frog,” so we use our imagination. But Barkat gives us enough detail to let our minds run wild — How exactly is this creature bringing tea? How is that one toting a blanket?

And every illustration that includes Song seems to show a new side of her, this girl wearing vintage britches and a vest over puffed sleeves; her hair, wild and free. Sometimes she faces us, and sometimes she doesn’t care to. In one picture she is almost completely white, illuminated by the moon. 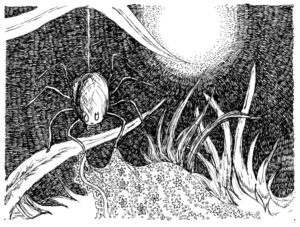 My favorite illustration occurs at a quarter past 12, when Song and her friends face an obstacle. There they are, all together, fifteen minutes after midnight, ready and unable to reach their destination. It’s an important moment, both for the characters and for the reader. We all face doors that stay shut. What will we do when our time comes?

Song and her friends have the perfect solution, one that involves a bit of wordplay. For there is more than one way to The Midnight Ball.

What will you be reading over the holidays? How about a classic, with a girl sure to become your bosom friend? A girl who, like Song, is also fond of puffed sleeves. Join us Friday, January 14, for L.M. Montgomery’s Anne of Green Gables.

Check out the companion materials! for The Midnight Ball, the first title in the beautiful math series!