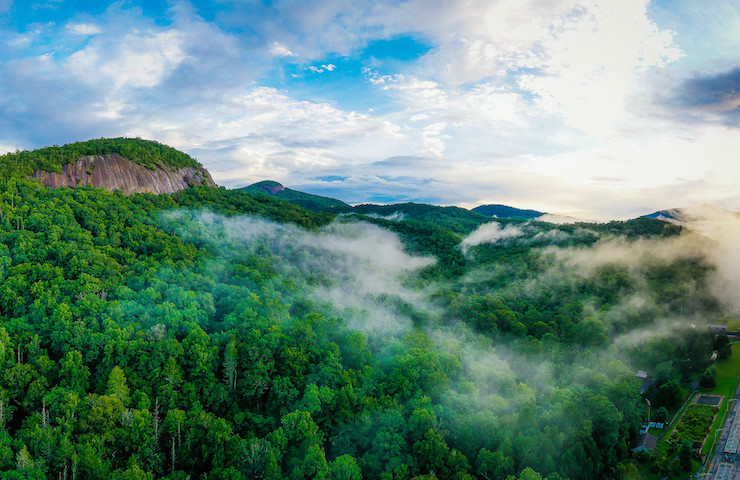 State bird: Northern cardinal. State wildflower: Carolina lily. State nicknames: The Old North State, refers to its division from Carolina in 1789, a century after the land was granted by Charles I of England; The Tar Heel State, because much of the tar used for naval shipbuilding came from the state’s forests.

Robert Frost has a poem titled “Christmas Trees,” in which a country man learns that a city fellow would pay $30 for 1,000 of his trees — “A thousand Christmas trees I didn’t know I had!” What had been simply clumps of untended green becomes a treasure.

Frasers and other trees used for holiday decorating are grown on tree farms, then sold at auctions and trucked to stores and street corners and parking lots across the country, as well as to the Caribbean, Mexico, and Japan.

It’s a slow production process — the Fraser fir can take up to twelve years to grow to living room-height, yet it makes up more than 99% of the Christmas trees grown in North Carolina. Extremely tall Frasers have graced the U.S. Capitol and the White House. And U.S. military troops stationed around the world have received holiday cheer from trees donated by the North Carolina Christmas Tree Association.

The Fraser fir is valued for its needle retention and fir-laced aroma, making the room smell merry and bright. Native to the Appalachian Mountains, the tree is named for John Fraser, a Scottish botanist who discovered it on hiking expeditions in the late 1700s.

Autumn is traditionally the season of the tree harvest, but when a crop takes longer than one year to be ready for market, many things can short-circuit growth, including droughts, floods, pests, and bugs. Growing the perfect tree takes patience.

Also, Christmas trees don’t naturally grow that perfect pyramid shape — a farmer has to trim and shape the tree as it grows. In any given tree field, some of the trees will be ready one year, and some a year or two later. If you live in-state, you can visit one of North Carolina’s choose & cut tree farms.

Now, some of you Grinches may be muttering, Why, oh, why would I want a real tree? Answer: for the environment. Real trees do what real trees do — absorb carbon dioxide and give off oxygen. Each Christmas tree farm is its own miniature forest, providing homes for wildlife and nurturing the soil, some of which isn’t fit for growing other crops.

Moreover, Christmas trees are easily recyclable (our city has a truck that picks up de-decorated trees in January and turns them into mulch). Other used trees are taken to beaches, to use as natural barriers, and some end up as part of backyard habitats, providing a wintering place for cardinals and other birds.

Whether or not you put up a real little tree between now and the new year, you will certainly see one, somewhere. Check the label and see if it’s a North Carolina Fraser fir, standing tall, a green flower in our midst. Remember that before it was bedecked with fa-la-la-la-la‘s, it was simply a little tree. One waiting for us to sing Noel.

who found you in the green forest
and were you very sorry to come away?
see i will comfort you
because you smell so sweetly

i will kiss your cool bark
and hug you safe and tight
just as your mother would,
only don’t be afraid

look the spangles
that sleep all the year in a dark box
dreaming of being taken out and allowed to shine,
the balls the chains red and gold the fluffy threads,

then when you’re quite dressed
you’ll stand in the window for everyone to see
and how they’ll stare!
oh but you’ll be very proud

Use any of the things you learned about North Carolina (research more, if you want!), and put one or more of them into a poem. If you like, weave in a little generosity. Share in the comments.