I get to live in the gorgeous Evergreen State—Washington! There’s an array of stunning views here. If you look at photos of Mt. Ranier National Park, you might think you’re looking at footage from The Sound of Music.

And then, over in Eastern Washington (we’re divided by the Cascade Mountain Range) you’ll find a completely different climate, and terrain. (Oh my goodness—if you want to give yourself a heavenly treat, check out images of the Palouse—breathtaking green rolling hills. This is where I imagine myself when I write.)

With that recommendation, I had to look up the Palouse region of Washington. Turns out I’ve been very near there — three times, the last time in 2014. Coincidentally, that is the year the students of Washtucna Elementary School decided the state needed an official waterfall, and the state chose the one which just happens to be located in the Palouse region. 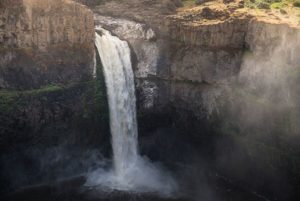 Ice Age flood fans? It takes all types to appreciate the great state of Washington, with its volcanoes, islands, majestic peaks, wine county, green rolling hills, and waterfalls. I have not seen Palouse Falls. But I am a literal card-carrying member of my own state’s park system, so I’m always on the lookout for state-sanctioned natural beauty. For the photos, sure, but also for the poetic potential.

Robert Southey has a fun poem about a waterfall titled The Cataract of Lodore, with its water “and so never ending, but always descending.” It seems waterfalls beg for artistic representation, for a place we can imagine ourselves as we write. The Washington state park website proclaims, “Palouse Falls is an artist’s dream, and many a painter or shutterbug has set up an easel or camera and tripod to capture the falls in the changing light.”

One of my favorite parenting memories is when my son told me he had never seen a waterfall. I knew just the hike we needed to take in order to see not one, but three of them. That was in Colorado. (Forgive me, Bethany, for writing about a different waterfall. It’s the only one I have.)

“I’ve never seen a waterfall,” you said,
so I took you to Ouzel Falls.

(forgot about Calypso Cascades
on the drive there)

You wanted to stop before we got started.
“No,” I said, “It gets better.”

We heard the falls before we reached them,
broke the rules and fed a chipmunk.

in my wisest mom voice,
then forgot all about ouzels

until Kathleen Jamie’s poem
The Dipper

issued into my life,
my book.

And not until
I wrote this poem

and looked up
Ouzel Falls

did I realize Jamie’s bird
was ours

Speaking of birds, Washington’s state bird is The American Goldfinch. Its state flower is the Coast Rhododendron. Both would be happy to be featured in a poem, I’m sure.

Use any of the things you learned about Washington (research more, if you want!), and put one or more of them into a poem. If you like, weave in a little generosity. Share in the comments. And if you have a waterfall you have made your own, write about it. 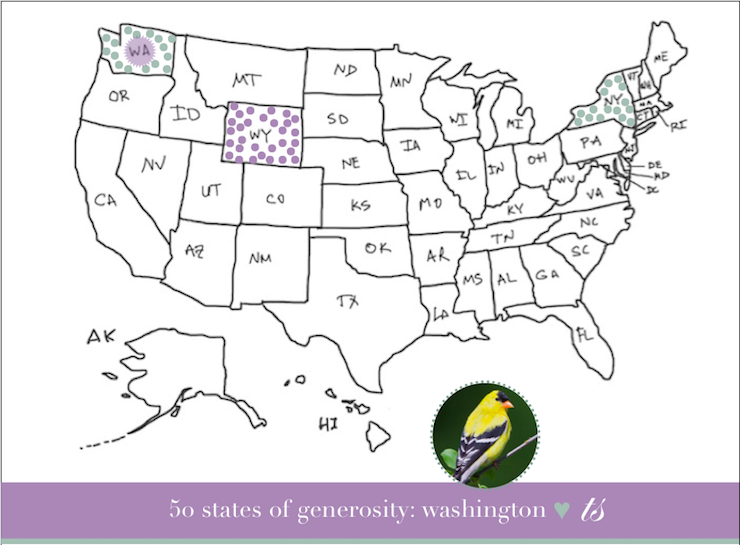