Fabulous Lord of the Flies Quotes!

If you haven’t read Lord of the Flies, you can just read these choice quotes from author Tania Runyan, and you’ll have a pretty good sense of the heart of the book.

Of course, then you wouldn’t have read Lord of the Flies, and we have to tell you that it’s quite worth reading. Not to write a paper. Or figure out the symbols. Or describe the characters. Or any of those tasks. (Been there, done that.)

Not an easy read, by any means. Hard things happen. Friendships are tested. Bizarre stuff goes on (hey, these are choir boys suddenly left on their own to make it under jungle-like conditions!). And, oddly, through it all, there is a lyric beauty to William Golding’s (the author’s) words. That might be one of the most unexpected aspects of the book.

We suggest you enjoy the story and pull your own favorite quotes. Just because. If you have to analyze them later, you’ll have an easier time because you let yourself simply enjoy the story first. (If you haven’t experienced the book yet, proceed with caution through the following quotes. There are definitely spoilers!)

(And, if you’re wondering, btw, who Tania Runyan is, she’s the author of How to Read a Poem: Based on the Billy Collins Poem Introduction to Poetry and How to Write a Poem. She’s also written some Lord of the Flies poems herself and offered prompts to go along.)

And Now…10 Lord of the Flies Quotes, With Page Numbers 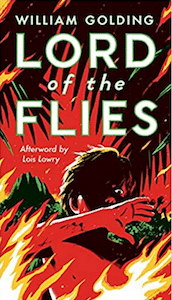 3. Again he fell into that strange mood of speculation that was so foreign to him. If faces were different when lit from above or below–what was a face? What was anything? (78)

5. Percival Wemys Madison, of the Vicarage, Harcourt St. Anthony, lying in the long grass, was living through circumstances in which the incantation of his address was powerless to help him. (94)

6. The ground was turned over near the pig-run and there were droppings that steamed. Jack bent down to them as if he loved them. (111)

7. [Jack] sized them up. Each of them wore the remains of a black cap and ages ago they had stood in two demure rows and their voices had been the song of angels. (133)

8. At last Simon gave up and looked back; saw the white teeth and dim eyes, the blood—and his gaze was held by that ancient, inescapable recognition. (138)

9. Softly, surrounded by a fringe of inquisitive creatures, itself a silver shape beneath the steadfast constellations, Simon’s dead body moved out toward the open sea. (154)

10. A semicircle of little boys, their bodies streaked with colored clay, sharp sticks in their hands, were standing on the beach making no noise at all. (200)

11. And in the middle of them, with filthy body, matted hair, and unwiped nose, Ralph wept for the end of innocence, the darkness of man’s heart, and the fall through the air of the true, wise friend called Piggy. (202)

Choose Your Own Quotes

We’d love to hear your favorite quotes from the book. Just drop them into the comment box below!

Write a found poem using some of the quotes we’ve provided. Or choose your own set of quotes from the book and arrange them in new ways to create a poem. (See some cool Lord of the Flies found poems samples here.)

“For years I’ve searched for a poetry-writing text that provides enough substance without the inevitable overload of content I’ll never cover. Now my search is complete.

How to Write a Poem contains 3 essential elements I’ve yet to find in one poetry-writing text: generous and informed instruction, dozens of compelling example poems, and rich and plentiful exercises that avoid tricks and gimmicks.