Our Thursday morning poetry group met on October 1. We all wrote about the fact that this October was a blue moon month: with one full moon on the 1st and a second on Halloween, the 31st.
I wrote a poem about another blue moon month on page 84 of The Joy of Poetry, describing not only my mother’s final months, but also her unexpected years of remission from cancer. “They were blue moon years,” I wrote.

I’ve had a different kind of blue moon season during the two-and-a-half years my dad lived next door. In the days before he died, he was rereading my book. His bookmark is at page 112, and nothing is highlighted. But on page 93, where Walter de la Mare’s “Some One” appears, the whole poem is neon yellow.

When a loved one passes away, the veil between natural and supernatural is rent. If we accept that rending, we become more childlike. Our imagination, too often stymied by adult concerns like bank accounts and breakfast cereal, can suddenly flow into unexpected places, like moonlight.

De la Mare was an English poet, novelist, playwright, editor of anthologies, short story writer, and author of nonfiction. He often wrote about “childhood, imagination, and the supernatural.” I can think of no better time when those three converge as on Halloween. That’s why I made “Some One” October’s By Heart selection.

My favorite image from the poem is “Only the busy beetle / Tap-tapping in the wall” — it’s the word “in” that’s surprising. The beetle isn’t trying to be spooky. (Beetle’s gonna beetle.) But beetle-Some One is busy tap-tapping in a place I can’t reach. And I can’t do anything about it.

The poem’s rhymes ebb and flow, one moment anticipated, the next, not. There is also repetition: “sure-sure-sure” and “At all, at all, at all.” The Some One who comes knocking does so three times.

Normally I learn my poems By Heart in the late afternoon, but this poem begged to be learned “in the still dark night.” When a poem knocks, you open. So I began to take it outside after sunset. I “listened” to myself read the words. I stood in the driveway and “looked to left,” to Dad’s house, “and right,” to mine. I “opened” the “wee small door” of my heart.

half moon, clown moon
time to tone it down moon

half moon, ghost moon
how I miss you most moon

Did you memorize “Some One” this month? Join our By Heart community and share your audio or video using the hashtags #ByHeart and #MemoriesWithFriends and tagging us @tspoetry. We also welcome photos of your handwritten copy of the poem.

By Heart for November

For the next By Heart gathering, November 27, we’ll learn “A Noiseless Patient Spider” by Walt Whitman. This one has a coloring page! 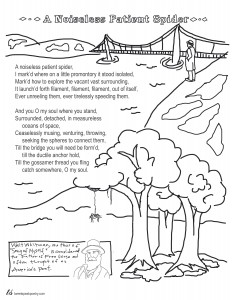