Sonia Barkat had long dreamed of being an author, though she always believed her first work would be a novel. Throughout childhood, she was famous for making “books” which included only dramatic prologues, intricately designed covers, and a full set of marketing copy.

Sometimes our initial dreams funnel into new directions. That’s how it happened with Sonia, who first began writing plays as part of a class. In that context she discovered that her penchant for prologues, dialog, and compact language could translate fairly seamlessly into writing solid monologues and plot action—driven by how characters spoke and gestured to each other, as well as by how they were positioned in relation to each other and an imagined set.

Thus, over time, she developed a series of short plays that take advantage of her best skills—one of those skills being the ability to pack a world of emotion and meaning into a few well-chosen words. The impact of this world is increased by how she juxtaposes characters’ words and actions—much the way a poet harnesses juxtaposition to make a powerful impact within a carefully-crafted small space.

Three of Sonia’s best plays have now been made available in Winter Stars: Three 10-Minute Plays—From Tragedy to Fantasy to Comedy. Read them like poetry. Imagine them like a brief Indie film. Wish for them to make their way to a stage. Whatever you do, enjoy “Auras in Suburbia,” “To the Shadows We Return,” and “Winter Stars” in this delightful debut collection. 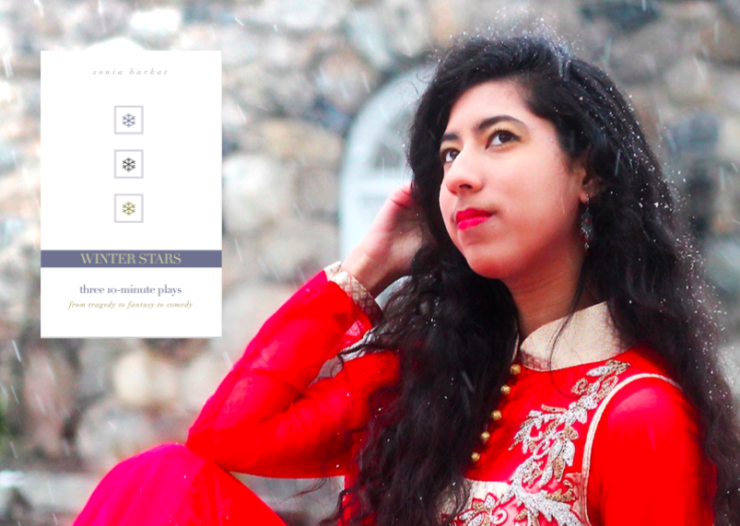 When Sonia Barkat set out to write the 10-minute play “Auras in Suburbia” that is now part of Winter Stars: Three 10-Minute Plays, she first worked from a magic word prompt.

Thus was born Mr. Jefferson, the star of the suburbia show. Here is an excerpt from his opening monologue, which uses the quirky word swooshes:

This gardener is no good. I sense danger. Danger and murder and bad poetry. The crystals don’t lie. I won’t have a menace trimming my hedges. It’s just practical. Only logical. I can see the ill-intentions with every flower bed he mulches … Murder; it swooshes.

I saw a sign the other day, in the crystal, just as I was stirring the sugar into my tea, and folding the creases from the morning paper. He has magic in the seams of his foul coat. Who wears a trench coat to water hydrangeas? Murder, I sense it. His coat; it swooshes.