Between the slate and pearl blankets of clouds, there is one white, glowing strip softening the divide. I can see this through the bare trees. Beyond the trees the river is a silver ribbon, silent. I wish you could see it.

It’s cold out here on the side porch, but the air has a hint of promise on this day. The first day of spring.

Last year, the winds finally had their way and brought down the curtains I’d had out here for years. The side porch is partially enclosed, with walls that little children used to, at parties, have to be told not to climb on, for fear they’d fall right out and break a few bones. The curtains had a Moroccan flair, gold ones interspersed with cinnabar ones. I was sorry to have to let them go. They went so nicely with the archway opening through which I am now looking out at the clouds, the trees, the river.

Truth be told, the curtains were, in fact, rather shredded, and one of my daughter’s friends noted several years ago that our house had begun to take on the look of a haunted house. I hadn’t found reason to remove the faded gold and cinnabar. But then the winds tore them down.

A lot of people right now have things both shredded and whole that are being profoundly altered. Others are experiencing what feels a bit more like an unsettling inconvenience. Whatever the case, no one is actually immune. We all feel the winds tugging at either our hearts or the hearts (and bodies) of those who live around or beyond us.

In the midst of all this, I have had to give up my new intention to sit at a coffee shop every Wednesday for the rest of the semester. Small sacrifice, perhaps. But I’d begun to look forward to the idea.

I discovered last night that my children, who I have not home schooled for five years now, since they’d gone on to college, see this as a chance to revisit their childhood in a surprising way. And so I feel that perhaps I have actually imparted one of the most important things any of us can learn in this life: creative resilience.

Recently, in Every Day Poems, we ran the poem Rider. It was written nine years ago, but it is just as pertinent today as it ever was. Maybe even more.

Multiple people wrote to me about the poem, after it was delivered to subscribers’ inboxes. They thanked me for it. Said it was just what they needed right now. Sometimes a poem can do that: be just what we need.

The poem pictures someone riding in a wilderness area, looking for a river, but discovery is not going to happen at this juncture:

There is this moment
when your heart sinks
out there on the mesa.
You thought there’d be a river
just around this corner.
Maybe there used to be, you think,
noting a snake-like depression
that seems to go on forever,
past the horizon, down towards Mexico
or to some kind of ruins.

Last night, I was very tired from so many things, and busy. The coffee shop idea I’d had for the day had slipped by. But my older daughter had made bread with some barley I’d been surprised to find in a sealed bulk container in the basement. The barley is pearled. And for a reason I cannot fathom, I have about 12 packs of it.

My girls don’t like pearled barley (though we’ve recently discovered they love whole barley!). So I ground the barley into a fine flour, and my daughter put it in her rye bread. The only thing missing in the rye bread was the rye, which I’d been going to grind, until I read the side of the pack and discovered it wasn’t food-grade rye. It was a big pack I’d bought to plant as ground cover, and though it promised 0% of weed seed, it noted the presence of various other things like “inert material” that simply didn’t sound quite edible to me. So. Rye bread. Without rye. With barley. 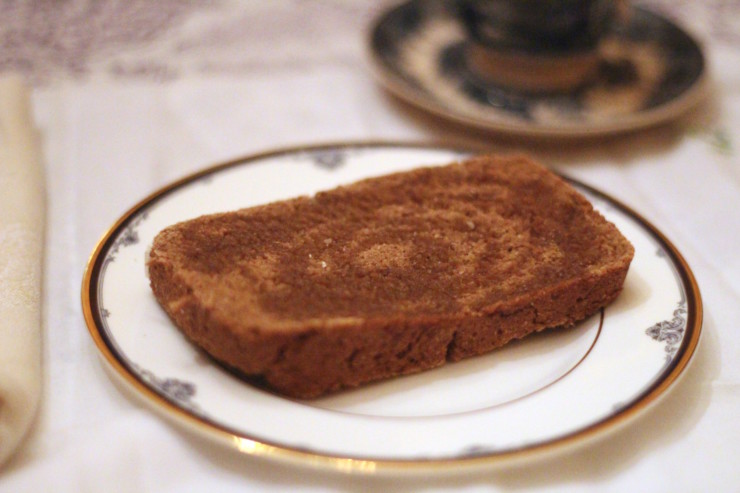 Now the bread had been meant for dinner, to go with a lentil soup I’d made, but we neglected to notice the multiple risings this particular loaf required. By the time the bread was baked, it was time for me to think about changing gears towards thoughts of eventual sleep. It definitely wasn’t time for a coffee shop. Or coffee. Or tea.

But my eldest daughter said softly, with a sweet and mischievous smile, “Don’t you want to do a coffee shop today? We could eat the bread, it’s so pretty.”

“I can’t drink tea this time of night,” I told her.

She persisted. “Isn’t there a night time tea?”

“Well, there is chamomile…”

In the “Rider” poem, there is no guarantee that the rider will ever find another river. For the sake of both rider and horse, of course, we hope a river is found. But the power of the poem is in the resilience and the resolve to at least try:

The side porch now has curtains of a completely different texture, color, and design. Whites, blues. More Dutch, perhaps. Something like the coffee shop we made last night in our little dining room with its dark wood table—where we drank chamomile tea and smoothed wild honey onto the bread for which we had waited much longer than we thought it would take. The floral-taste combination almost had the hint of spring.