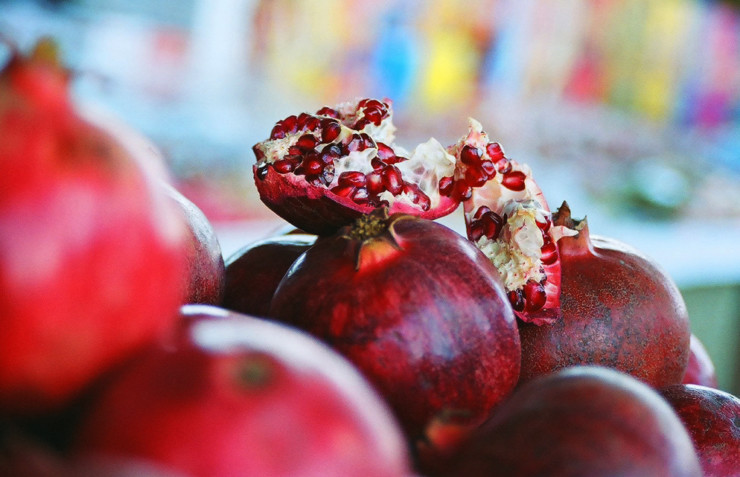 We were studying the myth of Ceres and her daughter Proserpina (the Romans’ equivalent of the Greeks’ Demeter and Persephone). Forty years later, I remember very little Latin, but I remember parts of that myth.

I remember that Ceres was in charge of the crops, and that, like any good mother, she loved her daughter. When Proserpina was kidnapped by Pluto, the god of the underworld, Ceres was bereft. She let the earth go cold and dark, and crops died. A deal was struck: Proserpina would live part of the year on earth, part below. Overjoyed at the reunion with her daughter, Ceres brought the earth back to life in spring. And it all had something to do with a pomegranate.

Mrs. Schulenberg probably cut the pomegranate open as she told us the story. We probably read a simple version of it from our dark green hardback textbooks and maybe translated it aloud from Latin. (“That was a rather loose translation,” she told me once after I’d haltingly made my way through a paragraph of Caesar’s Gallic Wars. All these years later, I can still hear her voice.) It would have been in the fall.

It was my first pomegranate, the first time I had ever knowingly seen the fruit with that name, or learned of the papery chambers and blood-red seeds inside its faded, scarred skin. The seeds were tart, and I didn’t like tart flavors, but I willed myself to eat some because I wanted to enjoy the food as much as I did the word. If I didn’t like the taste, at least I liked biting into the jellied part of the seed, the feel of its membrane giving way between my teeth and its juice releasing on my tongue.

There are still some foods that are available only in their season, and pomegranates are one of them. I never think about them until they show up in special displays at the grocery store this time of year; then I’m hungry for the flavors of fall—Bosc pears, butternut and acorn squash, clementines, apple cider, and these tart seeds. They taste right when the earth pulls up her covers on the way to winter.

“Appetite has a season,” Anne M. Doe Overstreet writes in her poem “Under Heaven,” from the book Delicate Machinery Suspended.

Find a market that sells a pomegranate
in early summer, and you find a place
that doesn’t understand how appetite
has a season, how it takes the careful
cultivation of months for its many-chambered
heart to find fullness, a climate both steady and dry
to swell blossoms to galaxies wrapped in taut peel.
What true connoisseur hurries desire
or endures the pith, the grain-grind of seed
absent the anticipation of the small explosion
from the aril that purples the tongue?

I’m guessing (I could ask, but I want to muse first) that the prompt for this poem was seeing a pomegranate at the wrong time of year. It’s a bit like seeing apple cider in July, or watermelon in November, or aisles and aisles of Christmas decor in September. We have an internal indignation, a knee-jerk, gut-check “No! That’s wrong.” What is that no about?

The poem suggests it’s about thwarting desire, devaluing anticipation. To be a connoisseur is, at its root, to know. And you can’t know a pomegranate without knowing a long season of pomegranatelessness, without the work of opening one, and digging out the seeds, and knowing the name for them, and hungering for that moment of bite.

Seasons come and go and come again. Like memories. On my high school’s Facebook alumni page, I asked, “Latin students: Do you remember Mrs. Schulenberg bringing a pomegranate to class?”

Dozens of people responded, from graduating classes before and after mine. Yes, some remembered the pomegranate. And more. “I loved Mrs. S after I realized she really did like me.” “I will always remember her ‘Forthwith’ when she got a message on the intercom in class.” “I don’t remember the pomegranate, but I love that Mrs. Schulenberg was promoting antioxidants before it was cool!”

Antioxidants, and treating students with both high expectations and warmth, are fashionable all year long.  Pomegranates are in season now. Some people eat them, as the saying goes, like candy. But they can add color, flavor and texture to dishes featuring other fall foods: say, a salad of spinach, pomegranate seeds and slivered pear.

How to choose a pomegranate? Palm them, heft them. Weigh your options in your own two hands. The heavy ones will be the juiciest. Look for ones with glossy rinds.

How to open, seed, and store them? Cut into quarters. They will bleed. To avoid staining things with their juice, fill a bowl with water and remove the seeds in the water. Whole pomegranates can keep for a few weeks in the fridge; tightly wrapped, the seeds can keep for a few months in the freezer.  Here’s a verbal and visual explanation of the process. And here’s a recipe featuring the warmth of a fall squash with the coolness of a delicate fall green.

Arrange butternut squash in a single layer on a rimmed baking sheet; coat with cooking spray. Sprinkle evenly with salt and pepper. Bake at 425 degrees for 15 minutes or until browned, stirring halfway through.