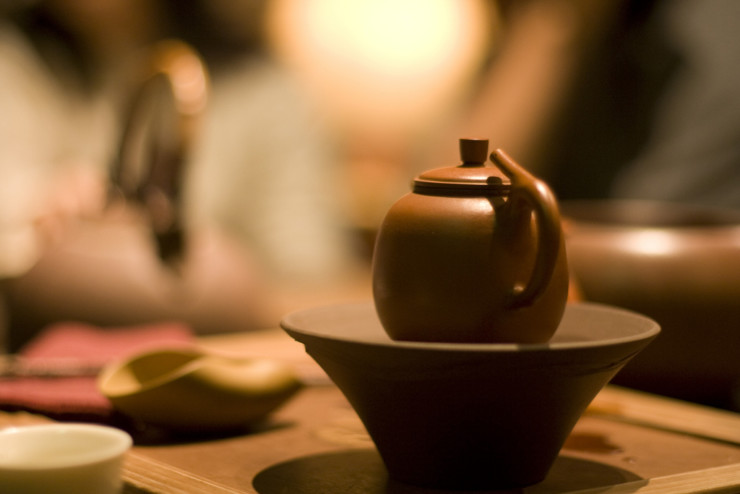 The week I moved to Pittsburgh, a friend sent me on a mission to find a good cup of green tea. She was evangelizing on the merits of green tea, sure. But her assignment was also, perhaps even primarily, a way of getting me out and about, discovering and exploring in my new environs.

There are more than a dozen tea houses in town, enough to form a Pittsburgh Tea Association. Arnold’s Tea appealed to me for three reasons. I thought it was the closest (though I was wrong). It would require me to navigate the streets of the North Side, a neighborhood I didn’t know but wanted to. And the name reminded me of the one Arnold I know (first name), a bow-tied hospitable guy. The actual Arnold (last name) is a retired schoolteacher who achieved her longtime dream of running a tea cafe.

There are at least three routes I could have taken. The north parkway was swiftest, according to my iPhone’s map app. I knew the east-west parkway, but was daunted by the north-south parkway. So I chose that route. Why not face your fears, even the mildest ones? I got into morning traffic, which was frustrating, but at least I wasn’t zipping along at parkway speeds. After the exit, turn right, go two blocks. Would I find on-street parking close by? Yes! I parked maybe 25 feet from the door, and figured out how to use the electronic parking kiosk.

Until last summer, I’d been a recreational green tea user. I owned a five-year-old tin of loose gunpowder green tea, a gift from a coworker who came to dinner and chose tea instead of wine because he thought I might be a teetotaler.

I liked the tea all right, so I don’t know why I didn’t use it more. It was mildly minty and also had a metallic tang, though that perception may have been from the title’s suggestion. The thing I liked best about it was the way the hard little BB’s of tea relaxed in water, softened, unfurled into long leaves. Like water brought out the trust in them.

I also had a tin of “Gypsy Green Tea” from Kroger’s natural foods section. The teabags were round, unbleached paper, and the “green” on the label seemed to refer more to its packaging (fair trade, no GMOs, post-consumer content) than the actual tea. It tasted … weakly green.

They have several green teas at Arnold’s, and I chose Dragonwell, partly for the name. Is it strong enough, medicinal enough, to make a dragon well? Could I tame a dragon with it? I thought about matcha, but that seems like a tea you have to work up to, plus I didn’t know whether it’s pronounced MAW-cha or MAT-cha. Next decision: what size cup? My tea adviser probably would advise bone china, but the only choices were mugs. The small was taupe. The large was white and didn’t seem that much larger than the medium, because it had a straight wall and the medium had a flared wall. And the medium was an appealing dark brown, a color that gave the illusion it might keep my tea hotter longer.

Giant cookies and pastries were temptingly displayed right beside the cash register, but farther back on the counter was a fruit basket. And I hadn’t had my daily banana that morning. Does banana go with green tea? Of course.

The tea. I cupped both hands around the cup and smelled it: a fresher green smell than the green teas at home, like fresh grass with a hint of clover blossom instead of dried plain grass.

First taste, a sip: It does not have a metallic tang. It does not taste as if it comes from a container that is competing with it for the Greenest trophy.

Second taste, a slow mouthful: Flavor unfurls. There’s something almost sweet in it. I like it, and I like cupping it in both hands.

Third taste, a few thirsty gulps: It feels like it has greened up my whole mouth, and the warmth feels good going down, somehow surprising and then pleasing.

I worked on my weekly calendar while I drank this tea. In the time I sat there, three guys came in separately, went to the same back table and loudly discussed the previous night’s winning hockey game. An employee started to take down a round table, and the two casually dressed guys sprang up to help her. The guy in a white shirt and tie and neatest hair got up too, once there wasn’t really anything for him to do.

Their movement drew my eyes through the big front windows to the neighborhood. Across the street: a Goodwill; the HALLELUJAH ANYHOW!! Gospel Talk Barber Shop; Elite Nails, with a sign so faded that it must not be in business any more; and a pawn shop, which had just rolled up its protective corrugated metal doorway.

I didn’t make it to the Three Rivers Arts Festival that week, though that was one of my favorite events when we visited Pittsburgh in my youth and again when I lived here in my 20s. I didn’t make it to the weekly movie night in the park. I didn’t go to see (well, even more to smell) Romero, the corpse flower that was blooming at Phipps Conservatory that week (it blooms only once every six to ten years, and then only for 48 hours at the most). I didn’t even get strawberry shortcake from the strawberry festival at the church on my block. I was busy moving in, unpacking, spending time with my aunt, having people over. But that day, I went somewhere exploring. And I took a different route home.