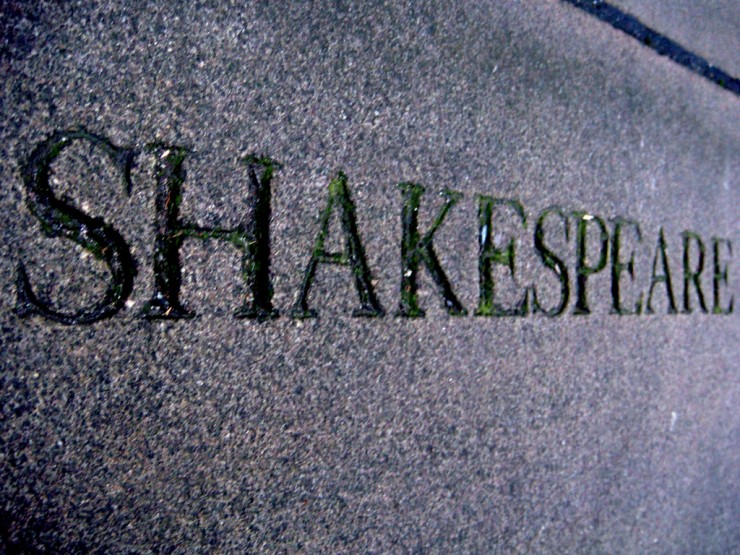 This year marks the 400th anniversary of the death of William Shakespeare. While Great Britain, never a slouch in the “can we find some anniversary celebration to draw tourists” department, has all kinds of recognitions and celebrations underway in Stratford-on-Avon as well as the rest of the country, the United States is mounting its own extensive series of Shakespeare festivities. And The Bard would likely smile to know he’s become a hashtag on Twitter: #Shakespeare400.

“@RomeoMontague: Hark! What tweet through yon window breaks? It is the moon, and @JulietCapulet is the sun. #Shakespeare400.” And the books. And calendars. And desk diaries. For those of us who might have been worried about the demise of Shakespeare in high school and college English curriculums, a simple search on Amazon for “Shakespeare 2016” is reassuring.

One of the best recently published books on Shakespeare has less to do with the quadricentennial celebration and more to do with what happened a little less than 400 years ago—1606 to be precise. The Year of Lear: Shakespeare in 1606 by James Shapiro, the Larry Miller Professor of English at Columbia University, is a wonder of re-creation of that year in Shakespeare life.

At the time, Shakespeare had been rather out of the picture for writing plays. The death of Queen Elizabeth I (1533-1603), the last of the Tudors, might have been a dampening influence on Shakespeare’s writing and producing new plays. But in 1606 came King Lear, Macbeth, and Antony and Cleopatra. What Shapiro does in The Year of Lear is provide a convincing portrait of how the plays fit into the context of the social and political events happening at the time. It’s quite a feat of scholarship, because Britain’s most famous playwright left behind precious little documentation of his life, other than his plays.

Shakespeare would likely have been writing King Lear in late 1605, when the news of the Gunpowder Plot—the plan to blow up the royal family and Parliament on November 5—rocked the country. The trials of the conspirators continued in early 1606, and Shapiro shows how the plot affected Shakespeare’s writing of the great tragedy of Lear. He also includes a delightful discussion of the theme of “nothing” as a powerful factor in the play. (Little did I know that “Something Good, ” sung in The Sound of Music by Maria, includes the lines “Nothing comes from nothing, nothing ever could, ” which are likely borrowed from King Lear; that’s my observation, by the way, not Shapiro’s). The Gunpowder Plot also touched rather close to Shakespeare’s home in Stratford. A number of the conspirators were from Warwickshire, and had hoped to stage an uprising at the time Parliament and the king were killed. Many of them were actually captured just a few miles from Shakespeare’s home town.

Other significant events of 1606 that would have been influencing Shakespeare with all three plays were the desire by King James I for union between England and Scotland, a desire that would be frustrated for another century; the always simmering religious controversy, bubbled to the surface by the Gunpowder Plot which was often called the “Jesuit Treason”; various cases of suspected witchcraft (James I had written a book on the subject); and recurring outbreaks of the plague. Of particular interest is the word “equivocation, ” a relatively new word in Shakespeare’s day used over and over again in Macbeth. How it was understood in Shakespeare’s day is as a means devised by Jesuit priests to help hidden Catholics in England essentially lie their way to safety. In fact, a loyalty oath was devised to make equivocation impossible; one of the people who initially refused to take the oath was Susanna, one of Shakespeare’s two daughters. Shapiro knows his Shakespeare. He’s the author of A Year in the Life of William Shakespeare (2009), about the year 1599; Contested Will: Who Wrote Shakespeare? (2010); and Shakespeare and the Jews (1986; reprinted in 2016). He also served as editor of Shakespeare in America: An Anthology from the Revolution to Now (2014).

Photo by Kurtis Garbutt, Creative Commons, via Flickr. Post by Glynn Young, author of the novels Dancing Priest and A Light Shining, and Poetry at Work.