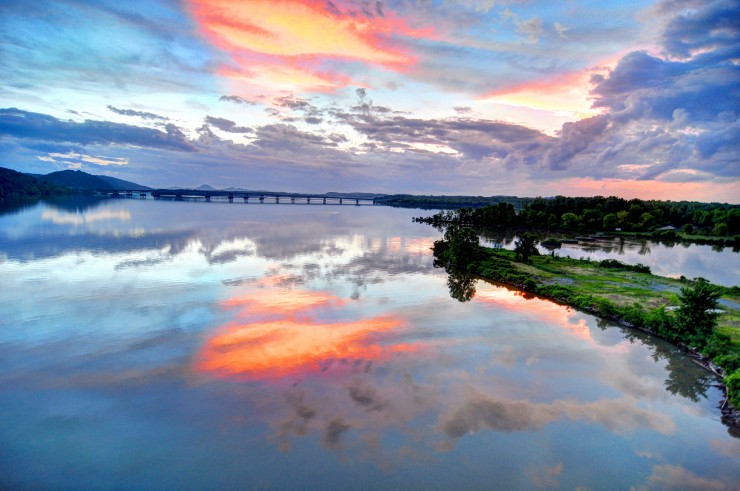 Look at lists of recommended places to visit in Little Rock, Arkansas’ capital city, and you’ll see some things you’d expect—museums, cultural institutions, historic Arkansas sites—and one you might not: the Big Dam Bridge. (Go ahead. Say it out loud.)

The Big Dam Bridge is big, 4, 266 feet, and built above a dam. It has a superlative claim to fame—the longest bridge in North America for only pedestrians and non-motorized vehicles—so you could cross that off your bucket list if you visited the bridge. But that’s not the only, or the best, or the most persuasive reason.

Now, there are times of day when you might almost have the place to yourself. But at some times—say, most weekend evenings in spring through fall—the bridge is a thronging promenade. Black and Hispanic families, women in saris, Caucasians. Children barely able to walk, old folks who need a cane assist on the uphills, and every age in between. Goth teens, girls with long hair and long denim skirts, dolled-up teens on the way to prom. Foreign languages you’ll recognize and some you won’t. It might be the most egalitarian common ground in the city.

2. To talk with strangers

You might see someone wearing a sweatshirt from your alma mater and chat about when you were there and what teachers you had in common. Don’t be shy; ask the approachable pigtailed middle-aged woman what she’s going to make with that six-foot piece of driftwood she’s hauling, and learn she’s making a fireplace mantel for her friend. Marvel at the MacGyver skills of the cyclist who zip-tied netting over a bucket to make a backseat for his dog, The Colonel—K-e-r-n-e-l, that is, because he’s small.

The four benches on the bridge’s span and the four more on the on-ramps are prime real estate on lazy evenings. They’re a great place to go with a sweetheart, to pack an impromptu picnic and do what people have always done when they’re getting to know each other: sit and talk. If all those seats are taken, it’s nice just to walk and hold hands and talk, then walk and hold hands and not talk. Marriage proposals have been made at the bridge, and weddings have even taken place there.

It takes about 30 minutes to walk over the bridge and back, depending on your speed and fitness level and relative need to stop and marvel at the view. While it can take more than 30 minutes to get over a breakup, a job disappointment, or any of the things that we would not choose but have to accept, getting some exercise and working up a sweat helps, both physiologically and emotionally. You can get over it, whether or not you buy the T-shirt.

There’s no admission at the Big Dam Bridge, no gift shop. There’s not a thing to spend money on, unless you’re there on a summer evening when a sno-cone truck comes by.

Lone herons and egrets fish and meditate along the river’s wild edges. Migratory white pelicans spend a portion of their year in Little Rock, often congregating on a sandbar west of the bridge. In spring, swallows turn the north underside of the span into their own apartment colony. And sometimes a flotilla of coots rest near a spit of rock, then get startled and take off like real-life cartoon birds—getting a running start first, literally walking on water. Cook’s Landing, a small park at the north terminus of the bridge, is a recommended birdwatching area. Painted buntings, bald eagles, scissortail flycatchers, orioles and avocets are among the reported sightings.

The bridge is built above Murray Lock and Dam, through which all traffic on this portion of the Arkansas river has to pass. Sometimes a barge comes through, and it’s strangely entertaining to watch the slow process. Depending on which direction it’s coming from, they might have to raise or lower the water in the lock to accommodate the barge. Then the tugboat pushing the barge slowly powers in, and teeny-tiny deckhands secure it with heavy mooring ropes looped over floating bollards, which rise and fall with the water level. Gates are closed; the water is raised or lowered again; a gate is opened, and the loads of sand or gravel or scrap metal make their way. The whole process takes about 30 minutes, and lots of people, especially if they have small people with them, will stay and watch and talk and marvel.

8. To visit an inland sea

When the river’s running high, the water being let through the dam creates a gentle surf. Soak in its sound. Be hugged by the wind. Watch for the gulls. And if you have time, walk down under the bridge on the north side to the sandy spit of land where people fish. Take your shoes off and push your feet into the sand. Smile when you find some of it in your socks weeks later.

In February 2016, Bicycling Magazine named the bridge one of the nine best bike-and-pedestrian bridges in the U.S. And registration just opened at the beginning of March for the Big Dam Bridge 100, Arkansas’ largest cycling tour of the year offering 100-, 62-, 50-, and 30-mile routes across Central Arkansas, starting and finishing at the bridge.

Directions on the bridge, like directions on a street, are painted in reverse order than you’d read them in a book, helpful for those traveling at racing bike speed. But to those on foot, it can read like poetry:

Cross the bridge for fitness, or bucket-list bagging, or for love, or for the love of poetry. Maybe, like William Stafford or Hart Crane, you’ll write your own.

Cover photo by Mike Norton,  Creative Commons license via Flickr. Post by Laura Lynn Brown,  publisher of makesyoumom.com and author of Everything that Makes You Mom.

O: Love Poems from the Ozarks

True to his vision, each poem is planted deep in the Ozarks. But it’s clear from the first “We Blossom the World” that this poet’s word choices paint “The wetness of dew settling on beat-up barns, ” and allows witness to “The back forty sinkhole where I drop all my sins against you” (5-7).