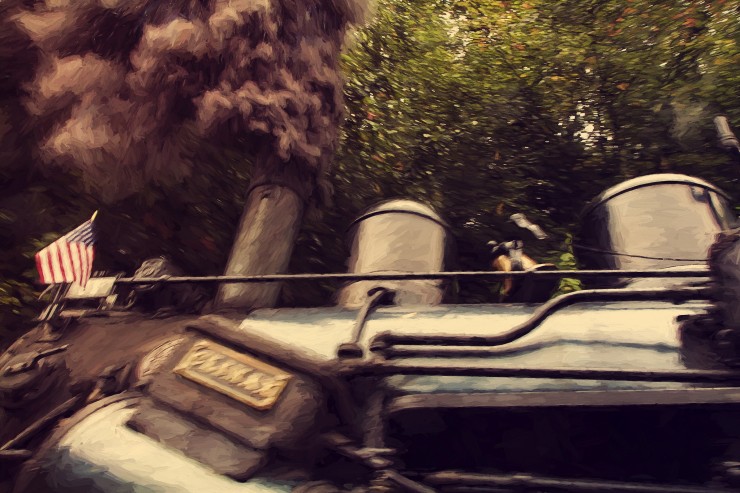 We approached the hand-painted sign attached to the stage door slowly. I was touring the recently-renovated Delphi Opera House in nearby Delphi, Indiana, with several other freelance writers and journalists. Throughout the tour, the executive director, Sara Daly Brosman, had pointed out historical curiosities that had been preserved through the construction project: old window glass, steel pipe handrails, oddly angled walls. The No Admittance sign added to the ambience, especially with the “here” scrawled out in a different, messier print, probably by a disgruntled stage manager who wanted the door to stay closed.

“Somewhere along the line, someone painted this very cool sign, ” Brosman said. Each of us approached the sign and touched it, confirming that it had indeed been painted though the letters looked like they had been etched and burned into the wood. I took my turn, not overly impressed with the artist’s font.

“James Whitcomb Riley, who performed here several times, was a sign painter prior to becoming a poet and a humorist, ” the director told us. As a Hoosier, Riley was one of the first poets I took a shine to back in high school. “I have no idea if he painted this, ” she said, “but he did spend some time painting signs and going across the midwest and into towns and into a drugstore and saying, ‘Do you need any signs painted?’”

I was a little disappointed by the speculative nature of the claim. But before I moved on, I needed to clarify something.

“He gave presentations, he spoke, he read his poetry, he also performed with a very popular entertainer from Indiana named William Nye. He was a humorist and they performed here together at least once, ” she explained.

With a little more research, I learned I could stalk James Whitcomb Riley right back to the old railroad station in my own city. Riley was a frequent train passenger on the route from Indianapolis to Delphi, a route that crossed right through Frankfort. “I read he couldn’t stand Indianapolis very much, ” said Carroll County Historian Mark Allan Smith. “He couldn’t stand the heat, noise and all of the cacophony of Indianapolis. And every so often, he’d hop on a Monon passenger train and come to Delphi and Carroll County as a refuge. It’s still here. The emphasis on the arts is still here. The nature is still here. Everything he was attracted to is still here.”

Still here. That’s the part that was most amazing to me. Not that James Whitcomb Riley would have enjoyed getting away from the hustle of city life, but that in the middle of cornfields and wooded copses, at the crossroads of two highways no one outside of central Indiana would ever have heard of, sits this little cultural center where poets performed to eagerly awaiting crowds.

“The first performance he had scheduled here, he was late in coming, ” the executive director had explained on our tour. “When he did arrive he was very frustrated because the train connection was not quite on schedule and so he got here late and was very flustered. The audience was so anticipating Mr. Riley’s performance that they waited patiently and they responded with applause when he stepped on the stage. They cut him some slack even though he was late.”

Just like on the tour of the opera house, having encountered James Whitcomb Riley right here in my own stomping grounds, I’ve started seeing things differently. My community might not be a hot-bed of artistic incubation, but there are creative people here and there are inspiring landscapes and cultural traditions. There always have been. And James Whitcomb Riley knew it. His large body of work and his performances around the country were drawing attention to and properly representing all the goodness he found in his home state.

“What made Riley unique was that his poems so firmly celebrated a specific place and time, ” explains an article from the Indiana State Museum. “For readers in other parts of the country or the world, he presented Hoosiers as thrifty, wise, warm, funny and down-to-earth. His Indiana was an idyllic place where life was slow and easy, everyone kindly and compassionate. Hoosiers themselves, he presented as they liked to think of themselves, offering a wholesome portrait of their past, without warts or scars. In this way, coupled with his very active public reading schedule and the publicity he got from that, James Whitcomb Riley became a symbol of Indiana, admired by the world, beloved by fellow Hoosiers.”

Not all of life in Indiana was idyllic, and Riley himself surely faced down his own ghosts during his many days here. He was destined to practice law like his father, but he quickly abandoned that path for his sign painting and eventually poetry. Riley also never married, never had children, and never owned a home. His dear friend, Dr. Wyckliffe Smith, of Delphi, who may have been the one who arranged those first performances at the Opera House, was killed at a railroad crossing while making a house call. Riley also achieved very little critical acclaim during his lifetime, or even now.

But Riley knew his audience, and he knew how to honor those who loved him best. “Riley wrote not for academics or the literati, but for common people, for many whom his work was their first or only brush with poetry, ” the Indiana Historical Society claims. “He wrote in dialect and common vernacular on purpose. If his humor and pathos sometimes seem hokey and old-fashioned, he was writing 100 years ago, in a very different world.”

Recently, as I was traveling across north central Indiana driving from a funeral in Peru to a meeting in Lafayette, I noticed a sign dedicating a portion of State Road 25 to James Whitcomb Riley. I was somewhere between Delphi and Camden. I smiled to myself. This was exactly the stretch of land Riley memorialized in his poem “From Delphi to Camden.”

From Delphi to Camden

From Delphi to Camden – little Hoosier towns –
But here were classic meadows, blooming dales and downs;
And here were grassy pastures, dewy as the leas
Trampled over by the trains of royal pagentries!
And here the winding highway loitered through the shade
Of the hazel covert, where, in ambuscade,
Loomed the larch and linden, and the greenwood-tree
Under which bold Robin Hood loud hallooed to me!
Here the stir and riot of the busy day
Dwindled to the quiet of the breath of May;
Gurgling brooks, and ridges lily-marged and spanned
By the rustic bridges found in Wonderland!
From Delphi to Camden – from Camden back again! –
And now the night was on us, and the lightning and the rain;
And still the way was wondrous with the flash of hill and plain, –
The stars like printed asterisks – the moon a murky stain!
And I thought of tragic idyll, and of light and hot pursuit,
And the jingle of the bridle and cuirass and spur on boot,
As our horses’ hooves struck showers from the flinty boulders set
In freshet-ways of writhing reed and drowning violet.
And we passed beleaguered castles, with their battlements a-frown;
Where a tree fell in the forest was a turret toppled down;
While my master and commander – the brave knight I galloped with
On this reckless road to ruin or to fame was – Dr. Smith!