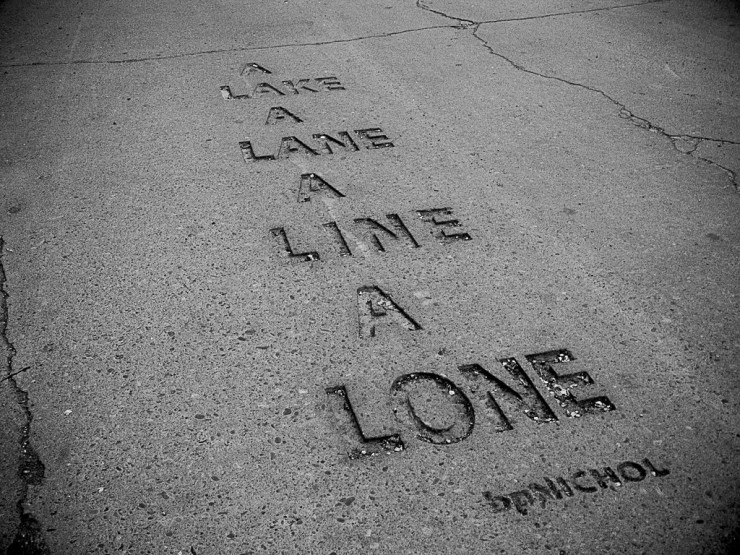 There is street poetry, and then there is street poetry. Poetry on the street, like the Sidewalk Poetry project underway in St. Paul in which poems are being embedded into the concrete, or the Wall Poems of Charlotte project, which paints poems onto walls in the city, both of which, I suppose, are technically poetry near the street.

But then, there is poetry of the street. Not poems that physically manifest themselves on the street, but poems in which the street manifests itself (perhaps even at times in a particularly physical way) in the language.

Here. Take a look at these 10 great street poems. This is what we mean:

Morning arrives late in winter, lingers on black paint
across the window of Sugar’s Nite Club.
Even the rain moves aside to the curb—
the sun has every place to lay its hands.

I am the witness of the dawn.
The sun rising is not the echo of another sun rising.
Nor is it new born,
but swings ’round the east, opening wider
its yellow eye. The illumination and shadow cast
across the Chrysler lot are equally sharp.
I have stood before a car in its flaunt of chrome and seen God
as an attendant outside the Shell station
unfolds a sign board, smoothing her stained overalls.

Serpentine tree.
Japanese, I suspect.
As in split maple, as in
it takes a hundred years
to snake these arms to such breadth.
Anyway. It seems everything
must have been leading to this juncture—
droughts, floods, springs coming
too late and winters too early,
everything conspired towards this:
snow, like white butterflies, laid
over old curves, dead leaves, intersections,
now ready to soft wing
the empty night.

Here is a long and silent street.
I walk in blackness and I stumble and fall
and rise, and I walk blind, my feet
trampling the silent stones and the dry leaves.
Someone behind me also tramples, stones, leaves:
if I slow down, he slows;
if I run, he runs I turn : nobody.
Everything dark and doorless,
only my steps aware of me,
I turning and turning among these corners
which lead forever to the street
where nobody waits for, nobody follows me,
where I pursue a man who stumbles
and rises and says when he sees me : nobody.

I HEARD a woman’s lips
Speaking to a companion
Say these words:

“A woman what hustles
Never keeps nothin’
For all her hustlin’.
Somebody always gets
What she goes on the street for.
If it ain’t a pimp
It’s a bull what gets it.
I been hustlin’ now
Till I ain’t much good any more.
I got nothin’ to show for it.
Some man got it all,
Every night’s hustlin’ I ever did.”

She Dressed In a Hurry

or perhaps never wore a slip. The photo
the press loved: a girl in a skirt, distance

between her thighs backlit by the sun,
a circle of children in her care birthed

by other mothers. The obvious
didn’t escape him: she could bear heirs

and be advised on attire, as they headed for
the silks of coronation, duress of his mistress,

the inevitable rain, wet hull of a tunnel,
tracer arcs of the streetlamps of Paris,

the velvet interior of a limousine, rivulets
of silver traversing her window, silver

crisp inch of air she let in, lifting the bangs
off her forehead, cooling her throat,

of impact. There should’ve been days
of bare feet on private lawns, time

to see her sons marry, their world no less sure
or less fraught with danger, the medics

of France advancing as she followed
a firefly into the thinning mist,

above the antiseptic green of the Eiffel grid
and over the Seine, past the boys in tights

dressed as plums, the fence of floodlights,
grey backs of fallow deer sidling

through the royal forests, slight as moths
and the slowly descending sheath

Wellner—as in a hollowing out and then naming it,
a place slipped back behind something else: here,
another road named Sleight. Sleight and Wellner,
Wellner. It hollowed and dipped; a bike down-
stream could go at measureable winds.

I came from under the canopy,
the starched hammock, bounced off the sky
like a child’s ball, and whipped past the drive’s trees:
the neighborhood’s invisibility.

In a car I rode up and back,
massaging the horizon’s edge, looking
through the roof’s opening, toward branchy
reachings. How they said, come.

The doze, the lull of Wellner, that nothing-of-noise,
nothing-of-note but beauty, then ‘Sold’ on its shoulders,
up the street. Who wanted to leave?
A man came quickly to survey.

I walked down to hear him say, “Prune back, landscape. Modern place?”
Then a swallowing chop. The interior play—
my mother at the television, my father across town—
but the cover creeping, the branches strayed
away from the canopy, the hole eaten in that sheet.

At mile 37 red poppies do abide
near fields of what we think will soon be corn,
past horses pale, their hearts held close inside
thin skin. Today is not a day to mourn
though if I say I am not sad I lied.

You’re gone. We rose and took it in our stride.
We pedaled hard and spied white poppies worn
from drought. Until we reached a red clump wide.
At mile 37.

Only then the red blooms promised for our ride,
sought at every pickup truck’s car horn
that blared at us for forty-two May miles,
to the right, beneath a black mailbox beside
the road we found red poppies newly born.
At mile 37.

—Megan Willome, from The Joy of Poetry

When I was cleaning, I came across
that little blue book I used to keep on our trips.

—You? Cleaning?
You have changed.

Do you want to hear or not?
“We sat on a bench on Las Ramblas
and watched a mime. people passed.
A beautiful day.” Do you remember
that afternoon?

How could I forget? We watched him
for an hour. But was he a mime
or just pretending to be a statue?

either way he was terrible—
he moved too much for a statue,
but he stood too still to be a mime.
And that ragged costume!

Then why did we stay so long?

Because he was terrible,
and because there was a train strike.
We’d said goodbye to the city,
then were handed another day to Wll.

But there was something else
that kept us there—the mime was hateful.

Hateful? He had a mean streak, maybe.

When tourists wanted a photograph, he refused
unless they tipped him first.

His image was all he had to sell.
I liked him. And he liked us.
After shooing some tourist off,
he’d look over and wink, as if we were in solidarity,
as if the whole performance were for us.

We must have tipped him well.

Then that fat German took
his picture anyway, and he gave her the finger,
still in character, with such intensity,
his jaw set, his eyes slits
before the Wst blocked the powdered face,
the gesture so fierce his hand trembled.
And then he looked to us.

Did you ever think the anger
might be part of the act?

I’m talking about a man standing
on a bucket, not Laurence olivier.
And that kind of anger is never an act.
I think he’d have smashed
the camera if he could have. I would have.

Like you to find danger
in a common gesture. You must
not know how many times
you drove me to it, my finger shaking
after your retreating back.

But that started years after Barcelona.
Today I’d rather think about the mime,
how sorry he seemed to see us go.

—Chelsea Rathburn, from A Raft of Grief

The trees along this city street,
Save for the traffic and the trains,
Would make a sound as thin and sweet
As trees in country lanes.

And people standing in their shade
Out of a shower, undoubtedly
Would hear such music as is made
Upon a country tree.

Oh, little leaves that are so dumb
Against the shrieking city air,
I watch you when the wind has come, —
I know what sound is there.

The Chance of Rain

When it rains here, we soak
up to our ankles and down
from our hoods. You wouldn’t
believe all the water teeming
in the cracks of our streets and
sliding down the sidewalks
in thin, fleeting sheets. We
could almost be swept away.