There’s a sock hidden in my home, and I can’t find it.

I invited four friends over “for tea, toast and poetry, “ and I had some ideas for how we’d spend our time. Everyone was asked to bring a poem they liked, to read aloud, and a mischief item. I’d set up my Christmas tree, with a skirt of poetry books, and set out some art supplies. I thought we might discuss our relationships to poetry and trim my tree with words. I didn’t expect a stealth sock.

We never made it to the tree. In fact, it took us nearly an hour to make it to poetry. My guests didn’t know each other (well, the married couple knew each other). But they’re all inquisitive, so they set to meeting and jelling while I sliced the bakery breads.

They’d chosen poems, and I made them choose again. What mug would you like? What kind of tea? Sugar, honey, lemon, half & half? Cinnamon raisin bread, challah or both? Toaster or toaster oven? Regular butter or honey butter? Cinnamon mixed with granulated sugar or with powdered sugar? I let them toast and adorn their bread themselves.

Once at the table, I listed what I thought we might do, acknowledging that it was overly ambitious for the two hours we’d committed. Someone reached toward a copy of The Mischief Café and asked whether we should read the instructions, as if playing a board game for the first time. Why tea and toast, someone asked? Why mischief? Because that’s what you do at these things, I said. Later I thought of better answers, but that answer is true, too; already, there is tradition.

We didn’t talk generally about poetry, but we discussed mischief. For one of us, that was the draw. For me, its connotation of troublemaking is strongest, but two and a half of us are fans of mischief, and they made a case for it as playfulness.

Theory turned to practice when we introduced our mischief items.

Katie brought a book of Snoop Dogg Mad Libs. One of us had misremembered “mischief” as “whimsy.” One of us was so intent on hunting her poem that she’d forgotten a mischief item, but she described one her mother had given her, and confessed one of its mischievous uses. Mine was my cow-shaped creamer, with the mischief of making a sound when you pour it. Kevin revealed that he’d hidden a single sock somewhere in the room, and had mischievously chosen one of his wife’s socks. We collaborated on a mad lib, supplying adjectives and nouns and verbs (“Skiiing!”). Katie read it aloud, and it was silly and maybe a wee bit uncomfortable, our adult selves conscious of our junior-high selves. But that exposure is what we needed to move into the poems we’d brought.

Vanessa read a poem Kevin had written for her 40 years ago. He and his brother made poetry a sport — “write a poem with this word in it.” This one’s challenge was “caraway.” It was an imagining of togetherness. There was a line about skiing down a hill of caraway seeds.

Did his poems make her fall in love with him? They were already engaged when he wrote this one, she said. I knew the answer to the next question before I even asked: Yep, Kevin won that competition.

He read a poem by William Kloefkorn, which began with a son asking his father to play football, and ended with an image of the ball spiraling toward the stars as the boy grew up and away into his own adulthood. He’d told us beforehand that he might tear up, and he did. He wasn’t the only one.

I read “Why I Write Poetry” by Major Jackson, which I’d chosen impulsively that morning from The Best American Poetry 2013 anthology. It provided its own “why poetry?” discussion, and its form was something I love: a list.

Every line began with “Because.” Maybe he chose to answer “Why do I write poetry?” and listed becauses. Or maybe all of these were snippets of thought, lonely lines waiting to be gathered in a poem. We all liked the lines Because I sit alone and welcome morning across / the unshaved jaws of my neighbors’ lawns.

Here are the first and last becauses.

Because my son is as old as the stars

Because I have been on a steady diet of words

since the age of three.

Susan had copied her poem, Child Development, by hand into a speckled composition notebook. She teaches four-year-olds, and her poem was about the silly name-calling kids do, to one another’s faces, and adults do too, behind each other’s backs. Its first stanza ended: “so three-year-old children / enter the phase of name-calling.”

She wanted us to guess the poet. She dropped clues. Think Clinton era. Think poet laureate. Think same initials as that president. Of course! Billy Collins.

Katie had brought a hardback copy of the verse novel Eugene Onegin by the 19th century writer Aleksandr Pushkin, with the Russian on one page and the English on the opposite. Why had she studied Russian? She’d heard it and thought it sounded beautiful.

She set up the scene she was about to read, then paused. She didn’t like the translation.

Read the Russian, we encouraged. She started, but felt her pronunciation was rusty. She read a few more lines, shook her head and stopped.

She was right. It sounds beautiful.

We decided to collaborate again. I read some names of poems from The Mischief Café, titles at the top of blank pages, waiting for their lines to be written.

You Know It’s a Threshold When
If You Want to See
I Choose
Edges
How to Write a Poem
It’s Like This, I Rememember
Maslow’s Hierarchy
My Real Name
Baby,

“Edges, ” Kevin chose. Lines about edges tumbled out of us. “Mischief is whimsy with an edge, ” Katie quipped.

I had an impulse to start scribbling notes, to capture all the dialogue. Then, before we risked losing the great ideas that had begun to fly, we started writing our lines about edges into little folios I had set on the table.

For the first time that afternoon, except for a few quiet moments after the reading of the poems, we were silent, but for the sound of pens and pencils. When everyone was finished writing, we passed our papers to the left. Each of us read the lines on the sheet we’d received. I started. There was one line we all especially liked. “I’m going to star that, ” I said.

Every reader starred a line by their writer. Then came the collaborative work of assembling our communal poem.

Do the edges first.

Without an edge
there is no middle.

At the ledge, precarious
the cliff, stepping back.

Home on a bluff.

The sharp cut of a voice
on the lip of hysteria,
rough years worn
shaggy with friction. 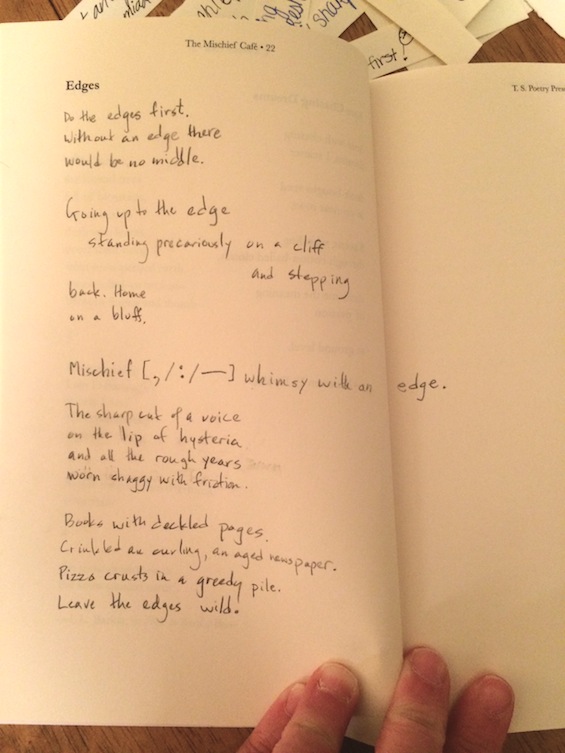 Later I asked everyone what they had especially liked about our poetry café. Someone liked the mischief, and our making a poem together. There were a lot of titles in that book she’d like to work on, she said. All of us liked hearing everyone read the poems we’d brought. We were all pleased, and a little astonished, at the way that strangers became a “we.” 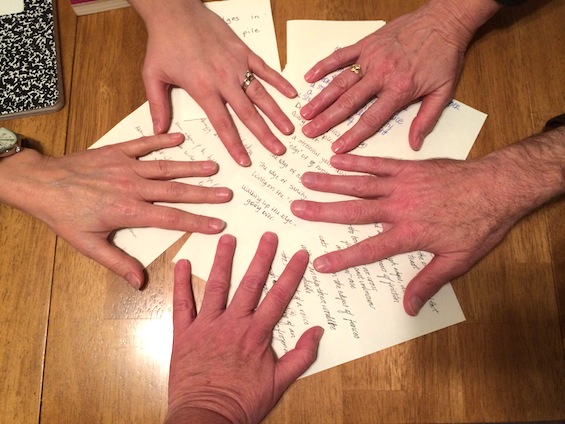 I saw Kevin and Vanessa the next day. Had I found the sock yet? No, and it was starting to bother me. Would he tell me which part of the room it was hidden in? He allowed me one geographic question, so I ventured.

“Is it above or below waist level?”

“That’s a really good question. Yours or mine?”

Back home, I found it a few inches above my waist, tucked on a shelf between Sweet Tea Tales and The Self as Constellation.

Photo by Claire Burge, Creative Commons, via Flickr. Post by Laura Lynn Brown, author of Everything that Makes You Mom.