While the Washington cafés were known for surprises, the San Francisco cafés could better be remembered for adjustments. Starting at Trouble Coffee on Yosemite Street.

To my mind, Trouble was a must-stop. After all, it was an article in the Pacific Standard, on Giulietta’s trouble and toast, that had first given me the idea of a welcome space here at Tweetspeak, that would “serve” toast and tea and coffee in “The Mischief Café.”

The article was poetic in a deep sense. (Read it when you have time. You’ll see.) And of course it featured toast, which somehow felt, as Matthew Kreider has put it, just so “right.” I wanted Tweetspeak to “serve” toast and poetry and soothe a little trouble with mischief. Little did I know that just shy of a year after reading the article, Tweetspeak would do exactly that. A virtual welcome space would become a traveling welcome space that depended on the graciousness of hosts all over the U.S., as well as the openness of perfect strangers to welcome poetry at impromptu junctures.

So I went looking for Trouble. Except I didn’t know it had more than one location. I went first to the “wrong one.”

Pulling in front of the Yosemite café, I was doubtful. The street was all but empty and had the feeling of being boarded up. An old man sat in an open doorway. The sun was bright against the bleached feel of concrete. But I was here. So I was going in. I could try to find the “correct” location later. For now, I’d make the adjustment. The Yosemite café is about the size of a walk-in closet, where some people come from. What you’ll notice first are the dark and eclectic artifacts juxtaposed with a peaceful feel of sheltered space, and you might feel like stepping inside is like stepping out of something.

If you are the fastest camera shooter in the West, you will accidentally take a picture at the exact moment you are being told not to do so. (Yes, I have a picture of the inside of this place. No, you can’t see it. To GI, as Guilietta is called, the café is a kind of sacred space, even as it is public space.) What you do at the door, or outside in the parklet, is largely your own concern. Shoot away. Inside, it was… tattoos, toast slathered with maybe a quarter cup of butter, coffee, and, as it went, Michael and Scott. They welcomed me, and poems. This was the first time of many more times along this trip that I heard regarding poetry, “I don’t seek it out, but I like it.” In the back of my mind, Neruda’s words starting playing, “Poetry arrived in search of me.” Though I wasn’t quite sure who gave whom more poetry, when it was over.

Michael’s rough-hewn hands danced on the counter, hot pink nail polish chipped away. His beautiful, dusty-blond, long hair was more stationary in contrast, as he otherwise sat quite still, happy enough to listen to poetry aloud. When I asked him if he’d like to read a poem to me, he declined. But later when I found a poem I whispered that I thought Scott could handle reading, he said very quietly, “I could read that.” And so he did, twice:

I had no coffee that day. Nor the latte Scott later offered me on the house. I did not get the name of the bakery that supplies Trouble (Scott won’t tell you). But I had come to the right place. Sometimes adjustments are exactly the thing your life, or your afternoon, has been waiting for. The day had a little bit left in it, so it was on to Judah Street’s Trouble, where I met Matthew Ye. Somehow we got chatting outside near the parklet there, and I read him my daughter’s sestina, and he told me he loved analyzing poetry in high school. “Am I going to be famous?” he asked, before reading “The Pants of Existence” to me. His surfer friends, Justin and Javier, waited patiently while he did so. Matthew’s voice was strong and clear, despite that he’d told me he was not a good reader. I wished he might read more, if time allowed and the sun was not already going down. Poetry had arrived in search of me again, as I ate my second piece of slathered toast for the day, before trekking to the store to pick up a sour dough loaf for the next afternoon at Lydia’s. (Judah Street wouldn’t tell me about Trouble’s bakery supplier either, and they were completely immune to my attempts to buy a loaf right off the counter, thus I had to settle for sour dough).

A short while later, the layered pinks of the sunset greeted me by the sea. The sky was adjusting itself into night. 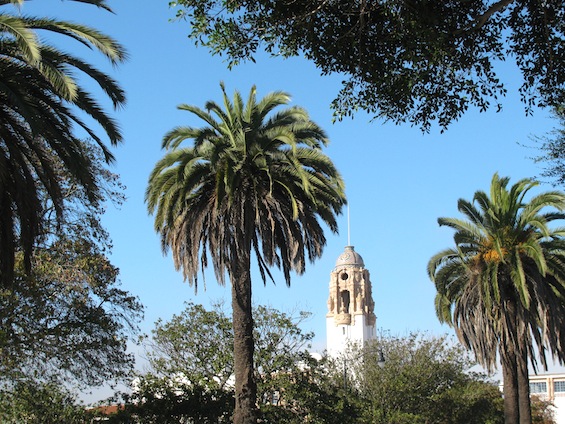 If Yosemite Street was all but empty, the region where I visited Lydia the next day was a polar opposite. First adjustment? Be late, for not finding parking, even though I’d left plenty of time and had planned to be early.

Once inside, I’d find that sour dough might cause Lydia an allergic reaction, so we made some of the cinnamon toast on olive focaccia. Another adjustment, and a wonderful one, as it turned out. When I handed each person a Mischief Café book, it was like a sacred exchange. Eyes grew large and quiet thank you’s were offered. I was definitely in the presence of bookish people. 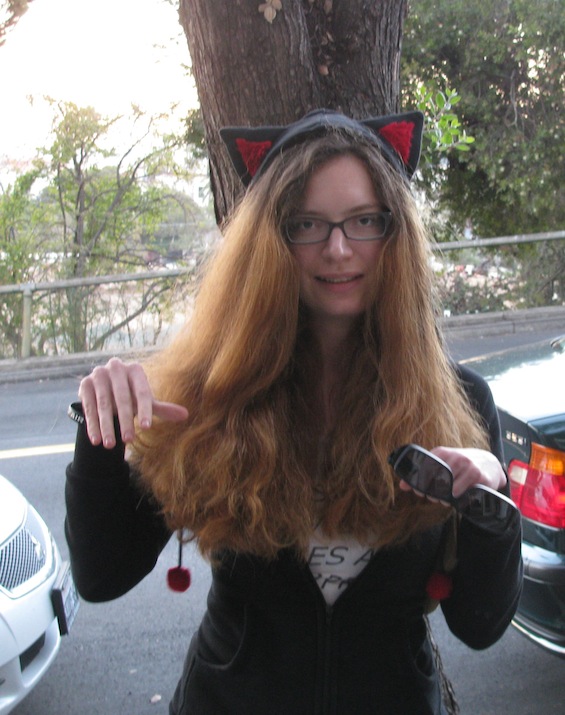 It only seemed apt to read sestinas, far above the city in the nook of the apartment turret, in the midst of a conversation that rolled and shifted but kept a steady sense of form. And I was privileged to have Lydia share her own sestina she let me take with me. It was one she’d written as a teen and still had in her “Sent” folder.

After reading the poem, we discussed how some people reach for something they can’t quite capture. Maybe that’s partly what poetry is, too. A reaching, in a world of adjustments, for the center that holds.

I saw her standing once beneath the sun.
Her eyes were wide and emerald-green, and hair
was brilliant red like a cascade of fire.
I thought perhaps she was my only love
and swore to remain faithful for all time.
I broke my sacred vows within a day.

The next I met and wooed within a day.
I had her by the sinking of the sun;
at night, within her arms, lost track of time
drowned in her scent, the darkness of her hair.
Her kiss was sweet as honeyed wine, her love
was warm, and yet could not contain my fire.

It seems that every one has had her fire
a flame that makes me tarry for a day
and sometimes, even, offer up my love,
hope for a passion hotter than the sun.
And yet, the sweetest lips, the softest hair
not one has ever kept me for all time.

And so I always leave, time after time,
depart when I can feel the cooling fire,
forget each one, doe-eyes, soft skin, sweet hair,
forget her by the ending of the day.
Her passion cannot blaze hot as the sun;
and I can settle for no lesser love.

Someday, I’ll find the one that I can love,
the one I’ve dreamed, awaited all this time.
Our love will burn, bright even as the sun,
consuming as the tallest blazing fire.
I know that it must come, that shining day,
when I—at last—can touch my lover’s hair.

I’ll kiss her, wind my hands in locks of hair.
The gods themselves will fall before our love.
No fleeting night, affair to end at day,
but truest love, a love to outlast time.
Throughout the ages, never-ending fire
a tale to live beyond the dying sun.

But till that day, the day when I can love,
I occupy my time with scented hair
and miss the fire, the blazing of the sun.