Thanks to everyone who participated in last week’s Photo Play and poetry prompt. Our photographers have a spirit of adventure, and here are a few of the snapshots shared among our Tweetspeak community. In the photograph above, Richard captured a grand dame from the golden age of train travel.

And let’s not forget how LW’s humorous photo manipulation made us smile. 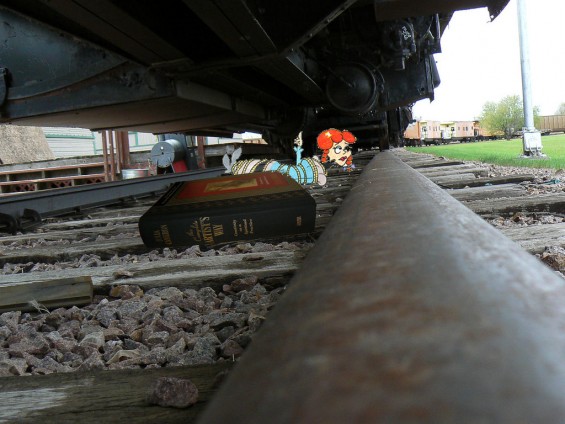 Here we see how Susan used train rails to guide the eye. Our poets drew inspiration from a single image and laid down the tracks for us to travel along. We’re glad Jody shared this poem with us:

If words were pictures, I’d see them there,
A string of suspended steps
sunk into the sky.
Mine, a stairway—
I said goodbye and went on…
climbing upward, upward.
Yours—a thousand steps, but ground-level, flat;
stretching forward in a solitary line.
You said, “I almost died, ”
then put one foot in front of the other
and continued to live
one painful step at a time,
transporting you away,
slowly moving forward like a train.
The rolling rumble carrying you along
as you survive, just barely.

Your words trail off in the distance
with the sorry, sad sound of worn out wheels,
and I’m left standing by the tracks
tasting smoke, listening to the faint, fading whistle
while you die.

POETRY PROMPT: Choose one of the photographs above and write a poem. You get to be the conductor of this prompt. 🙂