After listening to the advice of docent Marina of the San Jose Museum of Art to slow and see art, my husband and I went upstairs to see David Levinthal’s photographic exhibit, MAKE BELIEVE. We read this quote at the exhibit’s entrance wall:

Toys are intriguing, and I want to see what I can do with them. On a deeper level, they represent one way we socialize the young. —David Levinthal

We enter a dimly lit room, suggestive of a romantic restaurant or a boudoir. Although we rush because of a babysitter’s deadline, the impact of Levinthal’s life-like photographs sticks with me, months later.

He creates photographic dioramas drawing from cultural images such as Barbie, baseball, World War II and pornography. The first two untitled photographs are from Levinthal’s 1989 “American Beauties” series. One photograph of a minature pin-up doll inspired by Marilyn Monroe shows the back side of a bikini-clad blonde woman standing with her hands in an “I give up” position. Her left hip juts out while the top half of her “cheeks” peek out, split down the middle, from a barely-there bikini bottom. What is the message of the pin-up doll to little girls?

A nearby placard states, “[b]y dramatically blurring the images [in ‘American Beauties’], Levinthal invoked the sexuality—and the illusion—of 1950s Hollywood.”

A pastel-hued photograph of a nude female doll partially reclining on the edge of a bed is part of Levinthal’s “Modern Romance, 1984-86” series. The softly fuzzy image of the female doll evokes her isolation in her bedroom.

A set of photographs from the series “Desire” feature blurred closeups of polyurethane women trapped in bondage. I’m disturbed by the level of intimacy displayed by the toys in these scenes, then learn Levinthal created “deliberately provocative photographs in response to the increasing proliferation of pornography on newstands.”

I think about how pornography—often presented through photographic images—objectifies, making a real woman seem like a toy instead of a thinking and feeling person with her own desires and dreams. Levinthal’s photographs work in reverse, using toys to suggest real women.

On an adjacent wall, above a photographic series of baseball figures, is this quote:

Ever since I began working with toys, I have been intrigued with the idea that these seemingly benign objects could take on such power and personality simply by the way they are photographed. —David Levinthal

In “Baseball, 2003, ” Levinthal creates a sense of movement depicting Babe Ruth at bat and, in another photograph, the back side of Willie Mays catching a ball. I stare, wondering what these toys of athletes communicate to young boys.

Levinthal’s “Mein Kampf” renders a darkened and slightly blurred image of Hitler in front of a white rail with a white sphere of light behind him. Does the white light suggest his deification to an adoring audience? For me, the image conjures up old footage shown during a history segment in elementary school. I recall a grainy black-and-white image of Hitler shouting out his hate-filled message to the masses and I shudder.

If something is beautiful, you’re seduced by it a little bit. Then you think, oh my God, this is what I’ve let in. [These] images that deal with the pageantry of the Nazis are seductively beautiful, as were the actual pageants. The issues these works raise are extremely important…Childhood play can have a real darkness around it. I enjoy bringing that out.” —David Levinthal

Though months have passed since I saw Levinthal’s photographs of toys, his powerful images still disturb and disquiet me—a reminder how society socializes our children, and we can so easily and unwittingly let in the darkness. 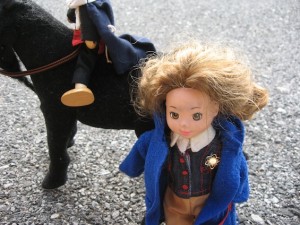 Check out our student project on toy photography!