Tweetspeak’s virtual Regional Tours take us to destinations of all kinds, finding inspiration in places such as art museums, libraries, and natural settings. Today, we tour the San Jose Museum of Art with a docent who instructs us to take a closer look.

“One eye sees, the other feels.” – Paul Klee Docent Martina G. of the San Jose Museum of Art held a mini iPad as the tour began in the museum’s light-filled lobby. Her blue eyes sparkled next to her buzzed blonde hair. Martina strolled to the front entrance and asked us to look up at the cathedral ceiling. Above us hung three different Chihuly sculptures with their waving sinewy glass tentacles, which we hadn’t earlier noticed. The largest one was mostly a pale baby blue and evoked a cascading waterfall. A young boy thought the red bulbous one looked like an octopus. A woman said the yellow one reminded her of Medusa. After a serious car accident in the 1980s, Chihuly could no longer twist and shape the hot molten glass. Now he designs the sculptures but relies on other artisans to craft his vision to life. She asked us whether Chihuly’s sculptures are considered art? Was she hinting at the industrialization and/or commercialization of Chihuly’s work? Or that an artist must physically create his own art instead of delegating its formation? Most of us thought Chihuly’s sculptures were still art. Next we walked into the museum cafe where hundreds of hanging paper clips hung from the ceiling in different lengths and varying distances from a wall. The installation suggested silver rainfall. Martina had added one of the paper clips. She asked us if we thought this was art even though someone might say, “my three year old could do that.” She hinted how an idea can be the genesis for art, but the idea itself doesn’t create the art.

An unexpressed idea in someone’s head won’t inspire anyone or the artist. Does something only become art if the idea is expressed in a physical form?

I believe in an emotional and spiritual element to art. Was that what Marina was alluding to when she encouraged us not to listen to art critics but to listen to our hearts when we interacted with art?

Before we observed three hanging wire sculptures in a corner of the lobby, Martina said the average museum attendee views an art piece for six-seconds. She wanted us to observe the sculptures without speaking for at least 10-15 seconds before we shared our observations. Ten seconds crept by like wading in waist-high mud. As I gazed at the sculptures, more details came into focus: they were in dark brown and black wire, and some of the spherical shapes were embedded within other larger spheres. How did artist Ruth Asawa accomplish that with wire? The sculptures evoked a slow-motion photograph of a drop of water or oil descending under gravity’s influence.

Next, we gazed at an aerial perspective painting by James Doolin aptly named Shopping Mall Studies and Ephemera, 1973-77 that covered an entire wall. Marina asked us to observe the painting before sharing our thoughts. One person noted it was the 1970s, as a woman wore bell-bottoms; another incorrectly guessed the decade based on the cars. Intricate details included what each person wore, the names of shops on the promenade, and the shadows cast by buildings and a flock of birds showed Doolin’s careful four-year study. She asked if we thought Doolin had painted himself into the scene. We found him in the center of the intersection, wearing a beret. 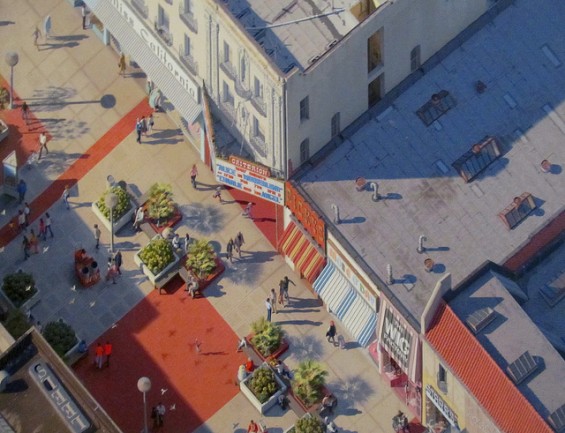 Marina lived in Czechoslovakia under communism and she recalled people wore brown and polyester. So the bright colors of the people’s clothing in the painting struck her. She reminded me how much our past influences how we view art. Because I was born in the United States, the vivid colors of each individual’s clothing didn’t strike me as unusual. Initially, I didn’t make a bigger connection to how being able to wear colorful clothes is part of our freedom to express ourselves because I’ve never lived under an oppressive regime. Her insights made me look at Doolin’s painting with fresh eyes.

Because of Marina, I will make time to truly see with one eye and feel with the other when I observe art in my daily life.