June 13 is the birthday of Dorothy Sayers, a 20th century British writer, poet, playwright, and translator. She is most famous for her series of mystery novels starring Lord Peter Wimsey, including Gaudy Night,  which forms the basis of this reflection.
_______________________

A couple of years ago, when I was waxing loquacious on my blog about my favorite books, two of my friends—one of them in New Jersey, the other in New Zealand—separately informed me that Dorothy Sayers’ mystery novel Gaudy Night was on their Top Ten Favorite Books lists.

I had read Gaudy Night in college and remember liking it, and I had just seen a stage version of it. When I told my friends this, they (again separately) kindly informed me that no play could capture the delightful subtleties, nuance, and subtext of the novel.

Having recently reread Gaudy Night, I can attest that they are right on all counts.

My friend in New Jersey, with whom I went to college, also mentioned in her response that Gaudy Night was the book that convinced her that she was not and never could be a writer. I didn’t have the temerity to ask why or how a mystery novel could convince her of this.

Now I know. Gaudy Night taught my friend that a writer does not use words for her own ends, utilitarian, altruistic, nefarious or otherwise. It showed her that being a writer requires one to be both a master of words and mastered by them and to maintain that delicate balance between mastery and humility, service and skill. Clearly, this book is not only a mystery novel. It also has a fair amount to say about the writing life. Consider this:

Had she made it or remembered it? It sounded familiar, but in her heart she knew certainly that it was her own, and seemed familiar only because it was inevitable and right.

Then, with many false starts and blank feet, returning and filling and erasing painfully as she went, she began to write again, knowing with a deep and inner certainty that somehow, after a long and bitter wandering, she was once more in her own place.

Peppered throughout the book are questions of vocation, including protagonist Harriet’s as a writer of mystery stories. Her sonnet is the beginning—or the end of the beginning—of a return to the fullness of herself. She doesn’t finish the sonnet, only manages to write the octave, though its “lines swayed and lurched in her clumsy hands, uncontrollable.” But still, “such as it was, she had an octave.”

Later, she discovers that her long-time friend Peter, who wants to marry her, has found her octave and finished the sonnet. She finds his sestet printed in his tidy script beneath her sprawling octave. Upon reading it, she reflects:

So. So there was the turn she had vainly sought for the sestet! …damn him! How dared he pick up her word “sleep” and use it four times in as many lines, and each time in a different foot, as though juggling with the accent-shift were mere child’s play? And drag out the last half-line with those great, heavy, drugged, drowsy monosyllables, contradicting the sense so as to deny their own contradiction? It was not one of the world’s great sestets, but it was considerably better than her own octave: which was monstrous of it.

After the literary reflection come more personal reflections, which reveal Peter to her more clearly, and perhaps more tenderly, than she has ever seen him before. Harriet goes to bed that night “thinking more about another person than about herself.” (Which proves, Sayers quips, “that even minor poetry may have its practical uses.”)

What I appreciate so much about this passage is, first, Harriet’s ability to perceive that Peter’s sestet is superior to her octave and second, her willingness to admit it. Harriet knows even before she reads Peter’s sestet that her octave is clumsy. She knows this because she has read great sonnets—lots of them—and understands how they work. She can recognize greatness when she reads it, and so she can see that her own words fall short. This sort of clarity in the face of one’s own creative work is difficult.

But it is also imperative. As writers we must be able to recognize good writing when we read it—not because someone else told us it was good, but because it is. Gaudy Night is a good book—it is good as a mystery novel, but it transcends its genre, dealing with issues of vocation, professional integrity, marriage, love, and disordered desire. In holding all these ideas together and grounding them in this mystery story and its characters lies its greatness.

I read it and come away awed by Dorothy Sayers’ masterful work. I come away sometimes doubtful about my abilities. But I also come away inspired to work at my craft, so that eventually I will become the best writer I can be.

Learn how to become a better writer: browse Literary Birthdays and Artist Dates. 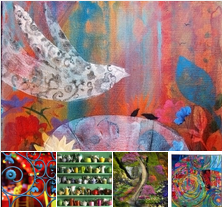