New York City, no surprise to anyone, is a city of a lot of things. A lot of cars. A lot of people. A lot of noise. Also a lot of music, and art, and books.

I know this, because during the recent Tweetspeak Meetup I spent a few minutes at the New York Public Library, a building that might be larger than my town (which has about as many people and cars as two city blocks in New York, but that’s beside the point). Aside from the books on display in the children’s book exhibit (more on that another day soon), I didn’t make it to the part of the library that actually had books. I just enjoyed my moments listening to hushed sounds bouncing softly off the high arches and vast marble ceilings in the vestibule. Anyway, a building that large dedicated just to books tells me there are a lot of books in the city.

I also slept in a room with a lot of books, in a hotel whose lobby is lined with books and which has its own Poetry Garden and is filled with guests with books up to their faces while they eat breakfast or enjoy an evening glass of wine.

But none of that stopped us from bringing more books to the Library Hotel. Because the sort of people who wish to spend their stay in New York City surrounded by books can never quite get enough, we donated a handful of T.S. Poetry Press titles for them to add to their collection, including Tania Runyan’s peach (okay, nectarine) covered How to Read a Poem, and Gillian Marchenko’s memoir Sun Shine Down along with The Novelist, Inside Out (published by International Arts Movement) and Love, Etc. by L.L. Barkat. The Library Hotel and the library itself are not the only places in New York City boasting (and bursting with) many books. We made a brief stop at Poets House in Battery Park and donated a similar collection of books which also included Anne M. Doe Overstreet’s Delicate Machinery Suspended and Marcus Goodyear’s Barbies at Communion. Neruda’s Memoirs by Maureen Doallas is on its way.

One never knows how such a gift might be received, though we had quite a gift in return when—on hearing that The Novelist is the tale of a poet who is challenged to write a novel—the book was snatched off the counter by Sarah, an intern working the front desk (she’s a novelist learning to be a poet and is an avid tea lover…thus also, the spontaneous gift of tea from her to us—see picture with red tea pack below). 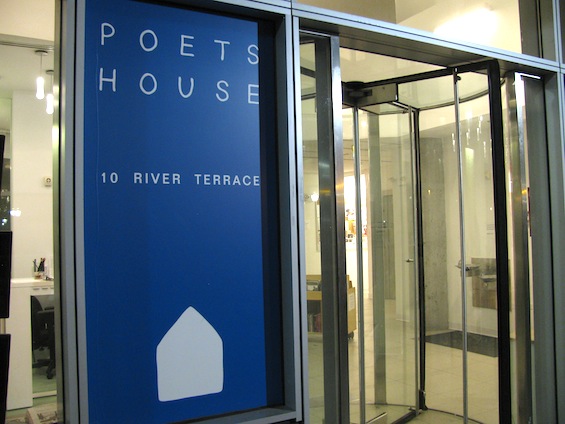 With over 60, 000 volumes already on the shelves, the Poets House open-stacks collection seeks to stock every volume of American poetry published. We’re proud to have T.S. Poetry Press titles now included in their collection, helping to ensure that whenever you make your next trip to New York City, the endless river of books will still be flowing freely. (You might need them while you wait to catch a taxi.)