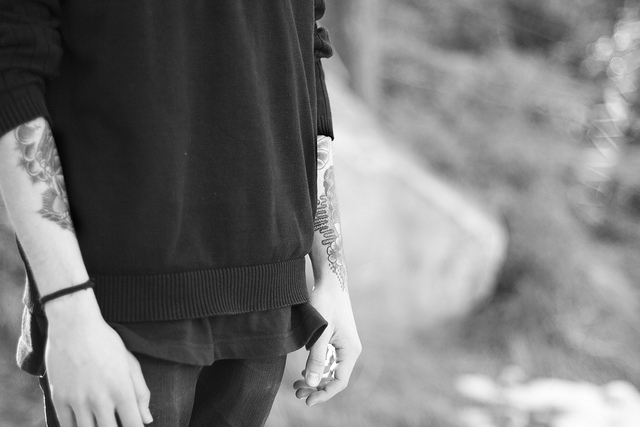 The Tattoo Tells a Story

“Each tattoo tells a story, ” writes J. Acosta in The Tattoo Hunter. “The tattoo is a freely chosen scar.”

In a poetic style that is at once fierce and tender, he tells of these chosen scars:

I have tangos tattooed upon the nostalgia of a mouth; poems tattooed on my apocalyptic anxiety.

My conscience is tattooed.

I have tattooed on my retina a painting by Magritte, a regret on my esophagus, a tongue on my crotch, a silence on the decade of the seventies.

The tattoo is a marking of sovereignty on the skin.

. . . a bullfighting ring of epidermic calligraphy and melancholy.

Acosta’s character works a bit of illusion with the reader, first suggesting “a tattoo is a freely chosen scar, ” as though he’s talking about the colorful artwork on the skin of the tattooed. But the tattoos he speaks of color organs other than the skin–the mouth, the esophagus, the retina, the conscience. He takes what we expect to be literal — for isn’t even the most exquisite tattoo across a smooth ivory hip a freely chosen scar? — and with graceful sleight of hand inks the tattoo as metaphor. The scars he illuminates are subcutaneous, seared between mind and soul, but also, poignantly, chosen of one’s own volition.

And then there are those scars that could be seen as their own kind of tattoo, carrying stories in their pigment but that aren’t so freely chosen, as in Susan Terris’ “After the Surgery”:

After the surgery when they took the breast tissue and the nipple, after twisting a back muscle across my chest for shape, they grafted skin for a new areola, cut a fishtail, formed a small bud shaped like a rose, tattooed it, (Pigment and palette, Beige 10, Beige 1, Pink 1, Brown 2) — a numb, artificial rose on a man-made hill (Hedge-clipper hum of needle, sting of punctured flesh), and I see the rosebud but how can I tender it now?

The tattoo is a story with a life of its own, it seems, captured in Acosta’s “sovereignty upon the skin, ” and once visible it’s as though there is a natural bond between one and another. In Jennifer Armstrong’s short piece, “Snakes, ” she finds herself offended at the opportunistic “stained-T-shirt, jean-sagging male specimen” in the supermarket who asks about the tattoo on her arm, offering to show her his, as though it were a mating ritual for a one-night stand. But then, it’s the story.

I consider lobbing both the boysenberry yogurt in my right hand and the raspberry in my left at him. But I’m a nice person and so I carefully set both yogurts back on their respective piles and turn to slowly walk away when his voice stops me for the third time. “I got this tattoo after my father died. It helps, sort of. I turn back and look. He’s holding up his shirt for me to see a vivid red and gold snake encircling his navel. My eyes find his. They are so blue.

We’re reading Dorothy Parker’s Elbow: Tattoos on Writers, Writers on Tattoos, a collection of essays, short stories and poems about tattoos this month as part of our September Tattoo theme. This week we want to consider the scars and stories — of both actual and metaphorical tattoos, the way sometimes the scars are chosen, and sometime they are imposed upon us, the ways each tell their own respective story. Perhaps you’d share your thoughts, or a poem, with us in the comments.

And join us next week for the readings from J.D. McClatchy’s “Tattoos” to Eliot Wilson’s “Designing a Bird from Memory in Jack’s Skin Kitchen” (pp. 141-199).