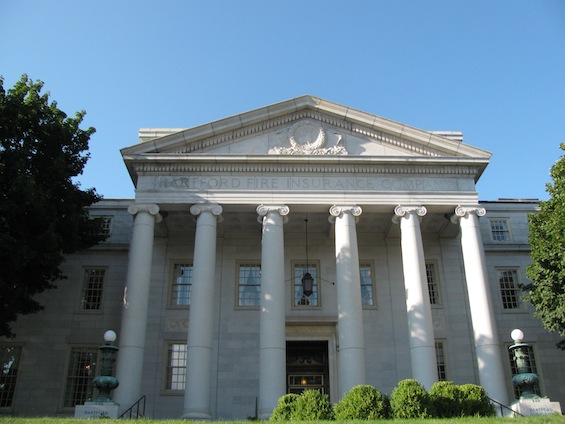 On August 2nd, I stood in the shadow of the historic 1921 Hartford Fire Insurance Company building. That’s what I want to say. I’m an insurance professional who’s been downsized and reorganized out of two other insurance companies, and I was standing in the shadow of a building whose engraved stone has outlasted a dozen mergers and acquisitions and name changes. I was (and am) also a poet come to Hartford, Connecticut, the Insurance Capital of the World—about to embark on the famed Wallace Stevens Walk, a two-mile stretch marked by engraved granite stones commemorating the work of insurance executive and poet, Wallace Stevens.

So it seems right to say that on August 2nd, the anniversary of Wallace Stevens’ death, I stood in the shadow of the Hartford Fire Insurance Company building. Never mind that the sun was at my back. 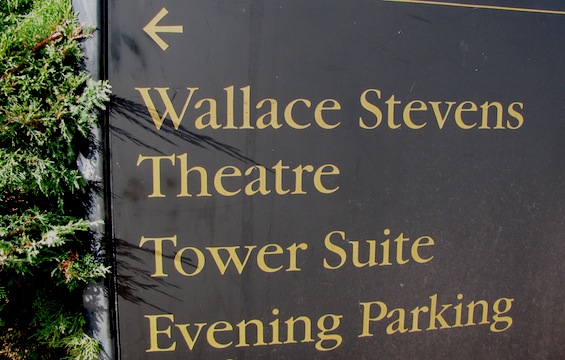 Driving up and down Asylum Avenue looking for the starting point, we met a personable Hartford Insurance parking lot security guard; we’ll call him M. He was unfamiliar with the Wallace Stevens Walk. Didn’t think he’d ever heard of it. With a little prodding, it seemed to come back to him.

“Oh, yeah! I know those! The tombstones. I think they start over there.” He pointed toward the front of the Hartford Fire Insurance Company building.

“Haven’t you ever taken the walk?” my companion asked.

“Why would I take ‘the walk’? I’m not a tourist, ” he replied. M crossed brawny arms over his fluorescent orange security vest.

“A poet! A POET. Well, then, ” he said, putting his hands on his hips. He laughed, shaking his head. “That changes everything.”

We inquired where we might best park the car so we could take the Wallace Stevens Walk and view the stones engraved with the stanzas of “Thirteen Ways of Looking at a Blackbird, ” even as he declined to accompany us on our poetic excursion. Perhaps we could park in the lot he was dutifully overseeing?

“Are you a Hartford Insurance employee?”

“No, ” came my companion’s reply. “But my friend here is an insurance adjuster.”

Eventually, M wore down and with a sigh and a smirk, directed us to the employee lot, largely empty, most of the Hartford’s hardworking employees already having gone for the day. We began the 2.4-mile long Wallace Stevens Walk with the first stone, grounded with a commemorative plaque in front of the insurance company building. The sun was at our backs, robbing me of the opportunity to stand in the Hartford’s actual shadow, though in many ways, metaphorically speaking, I’d been standing in its shadow for years.

With the exception of the first stone, the rest stand understated, tucked into the landscape of the property on which they were placed: behind the wrought iron fence of the Asylum Hill Congregational Church, beside a traffic light, under a tree on an unremarkable front lawn. Stevens originally studied journalism at Harvard and later became a lawyer. He worked for Hartford Insurance for 39 years, ultimately as a vice president. He did not drive a car, so he walked the two-plus miles to work each morning and back home each evening, often composing poems in his head while he walked.

While his work did not receive considerable notoriety until the publication, a year before his death, of The Collected Poems of Wallace Stevens (which includes the Thirteen Blackbirds poem), the modernist poet is now considered to be one of the greatest contemporary American poets. He published several other volumes earlier, including his first collection, Harmonium,  and The Man with a Blue Guitar. 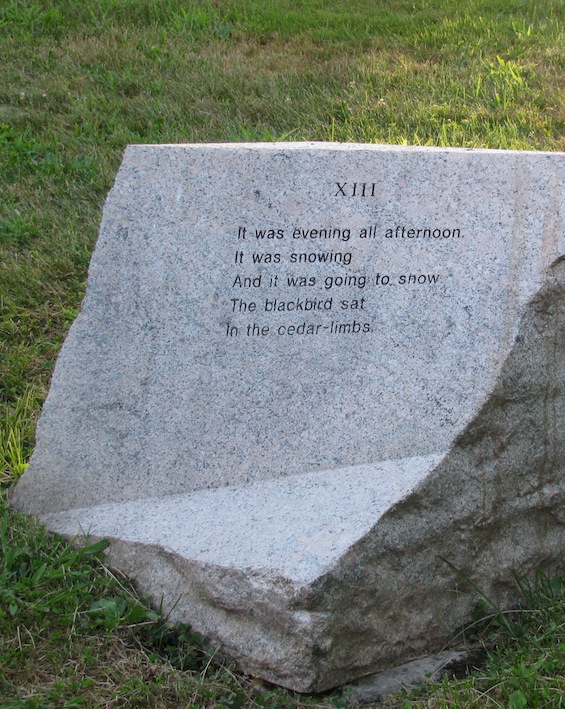 The walk, which seriously could have used the occasional water fountain, culminated at Stevens’ former residence at 118 Westerly Terrace. At the edge of their lawn, a couple stood facing their garden, backs turned to us. Perhaps this was part and parcel of now owning the late poet’s home, quietly ignoring the tourists, or the poets, or an adjuster pausing in front of the house for a snapshot of the final stone in the tour.

Standing between stone number 13 and Wallace Stevens’ former residence, I noted that the sun was (and is) still at my back. 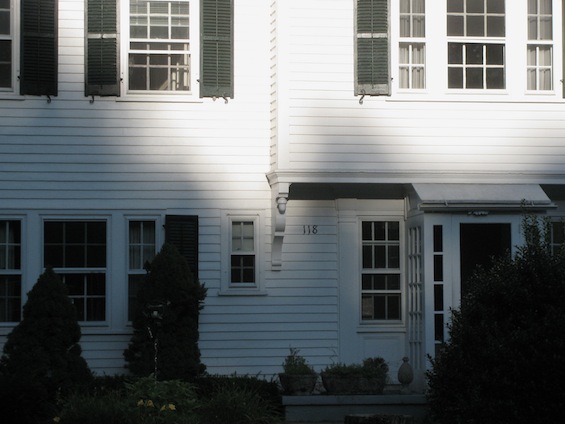 Thirteen Ways of Looking at a Blackbird

I
Among twenty snowy mountains,
The only moving thing
Was the eye of the blackbird.
II
I was of three minds,
Like a tree
In which there are three blackbirds.
III
The blackbird whirled in the autumn winds.
It was a small part of the pantomime.
IV
A man and a woman
Are one.
A man and a woman and a blackbird
Are one.
V
I do not know which to prefer,
The beauty of inflections
Or the beauty of innuendoes,
The blackbird whistling
Or just after.
VI
Icicles filled the long window
With barbaric glass.
The shadow of the blackbird
Crossed it, to and fro.
The mood
Traced in the shadow
An indecipherable cause.
VII
O thin men of Haddam,
Why do you imagine golden birds?
Do you not see how the blackbird
Walks around the feet
Of the women about you?
VIII
I know noble accents
And lucid, inescapable rhythms;
But I know, too,
That the blackbird is involved
In what I know.
IX
When the blackbird flew out of sight,
It marked the edge
Of one of many circles.
X
At the sight of blackbirds
Flying in a green light,
Even the bawds of euphony
Would cry out sharply.
XI
He rode over Connecticut
In a glass coach.
Once, a fear pierced him,
In that he mistook
The shadow of his equipage
For blackbirds.
XII
The river is moving.
The blackbird must be flying.
XIII
It was evening all afternoon.
It was snowing
And it was going to snow.
The blackbird sat
In the cedar-limbs.

If you should find yourself drawn to Hartford, be sure to take along our handy Blackbird Map of the Wallace Stevens Walk. And if you try to park in the Hartford lot, tell our friend M that a poet sent you. Photos by L.L. Barkat. Used with Permission. Post by Will Willingham.