Every Wednesday, my kids and I go to the local library. Every Wednesday my daughter heads straight for the Fairy Tales/Folk Tales/Mythology bays of the children’s section. She scans the spines of hundreds of books filled with beautiful princesses, ancient kings, gods of all shapes and sizes, and mythical creatures galore.

Earlier this month, she came home with half a dozen dragon tales, including our family’s favorite,  Saint George and the Dragon,  written in perfect prose by Margaret Hodges. The story is based on Spenser’s tale of the Redcrosse Knight in The Faerie Queene and even includes snippets of Spenser’s poetry. Trina Schart Hyman won a much-deserved Caldecott for her lush and gorgeous illustrations. I can’t count how many times our family has checked this book out over the years. I need to break down and just buy a copy.

One of my favorite stories about this particular book comes from Sarah Clarkson, in her book Read for the Heart: Whole Books for WholeHearted Families,  a compilation of great children’s books. She tells how, as a seven-year-old, she overheard her mother telling a friend, “Sarah is studying medieval history these days.” Sarah didn’t know that’s what she was doing. She was just reading her favorite book, Hodge’s version of St. George and the Dragon, over and over again.

For me, this is one of the wonders of books: they usher my children into other realms and ignite their interest in times and places beyond our family’s limited sphere of experience. Thanks to Hodge’s St. George, my oldest, Jack, when he was five or six, cut a piece of plywood into the half-mandorla shape of George’s shield and painted it with a bold red cross. He carried that shield with him to the grocery store, book store, drug store. He may have even taken it to church for all I remember. Jack became St. George, battling dragons wherever he went.

When Jack and Jane were 8 and 5, I started to read The Hobbit,  another tale about a deadly dragon. This one featured not the sturdy and valiant George but one Bilbo Baggins, a small personage of large appetite and uncertain adventurousness. Despite his diminutive stature and general reluctance to participate in adventures (“Nasty disturbing uncomfortable things! Make you late for dinner!”), it’s Bilbo who delivers his traveling companions from countless dangers and discovers the dragon’s lair. For a five-year-old homebody like my daughter, Bilbo is the perfect hero: he’s just like her. But even though he’s far from home and comfort, he still manages to outwit the dragon and bring about his demise.

From The Hobbit, we continued on, at my children’s insistence, to The Lord of the Rings,  While there are no dragons in this book, there are elves and dwarves and hobbits aplenty. Also nasty undead kings called Ringwraiths and the frightening steeds upon which they ride and fly. And very much alive kings like Aragorn and Theoden, whom Jack has adopted as role models. He even made himself a mantle and hood of chain mail, several swords of wood and metal, and a bow and quiver of arrows for when he wants to be Legolas the Elf for awhile. 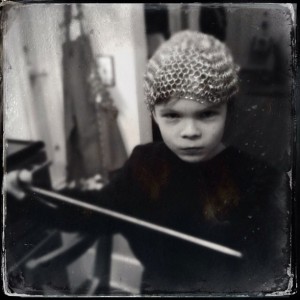 In all this reading and playacting, my kids are learning. Jack learned how to fashion a bow from a thick stick, how to fletch an arrow so it will fly straight and true. He’s learning which dragons he must slay, and which he can befriend, and how to tell the difference.

And I’m getting to watch the growth of his imagination and his character, to see how the books we read, the characters we encounter become part not just of our family’s lore, but also of his, how they become part of him. Internalizing St. George and Aragorn, Jack is internalizing a love of goodness and valor. As he grows in understanding, his sense of what is required of such a hero grows with him. Already, at nine, he understands that being a great knight is more than simply carrying a sword and a shield; it’s a willingness to care for those less able and to sacrifice himself for the good of another.

I could never have taught him this. I’m not sure such things can be taught. I think they have to be caught, like a cold. In this catching, books are one of my strongest allies, igniting my kids’ imaginations, firing their hearts, inspiring their minds.

And those dragons my daughter brought home? Turns out even in their villainy they’re allies, too, helping my kids put a name and a face on their own dragons.

Good books about dragons (and other mythical beasts) that our family has loved:

Saint George and the Dragon by Margaret Hodges, illustrated by Trina Schart Hyman

There are two sequels to this early chapter book about dragon-rescuer Elmer Elevator, which aren’t as good as the first, but still enjoyable.

How Many Dragons Are Behind the Door? By Virginia Kahl

A rhyming picture book about 13 princesses who hide a dragon in a tower of their parent’s castle.

The Reluctant Dragon by Kenneth Grahame, abridged and illustrated by Inga Moore

Adults will enjoy the humor in this book far more than kids will, but having the dragon’s faux fight with St. George will make them laugh, especially if they’re familiar  with the more traditional St. George and the dragon story.

Jack and the Beanstalk by E. Nesbit, illustrated by Matt Tavares

Nesbit’s version of the story about Jack and his adventures at the top of the beanstalk is another repeatedly checked-out library book.

The Book of Beasts and The Book of Dragons,  both by E. Nesbit, illustrated by Inga Moore

Nesbit is a favorite with our family, and these books illustrated by Moore are a delight for the eyes as well as the ears.

Where the Mountain Meets the Moon,  written and illustrated by Grace Lin

A gorgeously illustrated and beautifully written middle-grade book about a girl who must journey to where the mountain meets the moon in order to rescue her village from starvation.

The Hobbit and The Lord of the Rings by J.R.R. Tolkien

These are dense stories, the LOTR trilogy especially so, but as read-alouds, especially if you can manage different voices for the major characters, kids as young as five can enter their magic realm and walk the ground of Middle Earth for a piece.

Cover photo by Ezu. Creative Commons license via Flickr. Photo of Jack by Sprague Minger, used with permission. Post by Kimberlee Conway Ireton, author of The Circle of Seasons: Meeting God in the Church Year.