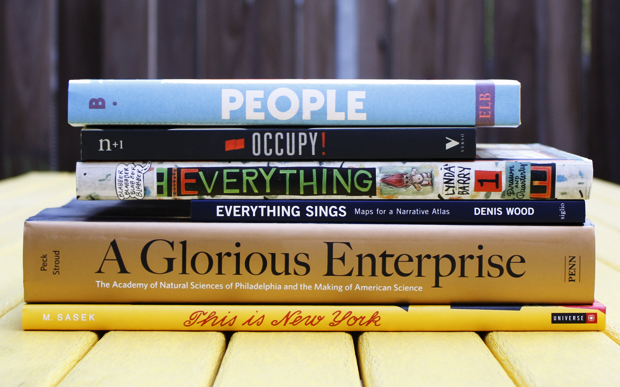 You wander around your library, or your basement, or your living room or den, all those places you have books. You look at titles, occasionally pull out a volume, recall something that brings a smile, like The Man Who Died Twice by Samuel Peeples, the subject of my first published book review way back in 1976 (and I got paid for it, too).

I wander around the upstairs bedroom at my house that holds eight, rather filled bookshelf units. Oh, and there is that tall bookshelf in my home office (another bedroom), and another shelf in a third bedroom, and that single shelf above my computer, and the four shelves, no, five shelves, in the basement. I’ll meander among the titles, touching one here, recalling another there, like the old friends they are.

What I never realized was that I have a massive collection of improv poetry staring me in the face.

Maria Popova at Brain Pickings has started a series of book spine poetry posts doing exactly that – assembling book titles that form poems, photographing them, and posting them. She calls it “Book Spine Poetry, ” and she credits Nina Katchadourian at Sorted Books for the idea. The one pictured above is entitled “New York” and is the third in Popova’s series.

Of course, it’s not exactly improv poetry. It’s more “almost improv poetry.” You have to do some work to find titles that lend themselves to the idea of a poem and fit together.

I tried one at home, and used these titles:

Farewell, I’m bound to leave you.
As I lay dying,
the heart aroused
the everlasting man,
the man who knew too much,
the man who died twice.
I am one of you forever.

The first line is a book by Fred Chappell. The second is Faulkner. The third is David Whyte. The fourth and fifth are G.K. Chesterton. The next one is my friend Samuel Peeples, noted above. And the last is another title by Fred Chappell.

I discovered that it’s easier – far easier – when you use business books. Business publishers like to use action verbs in titles; the literary set leans to nouns, phrases and rather dreamy sentences. (I’ll be posting one using business titles at my blog later this morning.)

But try to see what poetry is waiting for you, staring at you each day from your bookshelf. We’ll have a project coming in August on this. A month of Rain poetry, on the spines, if you can find water in words.

In the meantime, I’m going to try it using only titles by Charles Dickens (he liked nouns, unfortunately for this purpose) and Mark Twain.

We could be creating an entire cottage industry here. Or at least a few pages on Pinterest. But certainly a lot of fun.

Photo by Maria Popova. Used with permission. Maria Popova is “an interestingness hunter-gatherer and curious mind at large, who also writes for Wired UK and The Atlantic, and is an MIT Futures of Entertainment Fellow.” Post by Glynn Young, author of Dancing Priest.