A year ago Callie Feyen wrote a prompt drawn from a YA book called The Last True Poets of the Sea by Julia Drake. Here’s Callie’s idea for writing Letters of Three:

I thought if I were teaching this book, it would be fun to use this as a writing exercise. I’d call it Letters of Three, and I’d have my students write someone a letter three times, each time going deeper into what it was they are trying to express.”

So then, who did I need to write?

I decided I needed to write to myself — to the me that is a parent. But I wanted a slant approach because I prefer to sashay past the front door and climb in through a window.

Parenting is hard — sure — but writing believable parents is hard too. It’s so easy to lean into cliché. I like parent-characters who are wonderfully complicated, even in a book for kids.

So I chose three sets of parents with unique perspectives: the Dursleys, of Harry Potter, by J.K. Rowling; the Other Parents, of Coraline, by Neil Gaiman; and the Blevinses, of Cormac McCarthy’s All the Pretty Horses. I wrote the first two letters from the point of view of the child, and the final letter took the form of a poem from the perspective of the mother, Mrs. Blevins. 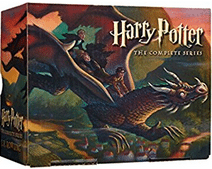 At the age of 1, Harry Potter is left with his aunt and uncle, the Dursleys, after his parents are killed. They raise him — or, more accurately, they let him live in their home until he turns 17, the age of adulthood in the wizarding world.

Well, thanks, I guess. I have tried to imagine life without you, but it’s not the happy-ever-after I so often dreamed of. What little you gave was actually good. Not happy, but good.

A cupboard under the stairs is better than dying of exposure. Or being killed by an evil wizard. And what if you’d never taken me to the zoo? I would not have heard that snake speak and learned something about my destiny.

Not to mention seventeen years of protection from Voldemort, just because you’re family. That’s something only you could do, and you did do it.

Still, I don’t much like you. I’ll have a butterbeer with your son, Dudley, who once brought me tea. He and I came to an understanding after that incident with the Dementors. I wonder what he would say about my childhood years, now that we’re both grown.

I trust Kingsley has taken good care of you since that night we said goodbye. He always took good care of me. You couldn’t be in better hands. That’s why I chose him for you.

It has been nineteen years since we’ve seen each other. Do you miss me? Do you want to meet my wife? My children?

I’d like to know what you think of our shared past and have been waiting to see if you wanted contact. If so, send an owl. She’ll know where to find me. Letter #2: Coraline to Other Parents

Coraline is a horror story for 4-year-olds. Our heroine doesn’t much care for her parents, until she is left in the care of Other Mother and Other Father.

That’s all you are: other. Not real parents. Not even better parents.

Sure, I prefer your recipe-free chicken, Other Father, but you’re not going to endure 39 wasp stings and ignore your own pain in order to teach me how brave I am for enduring only one sting. You only “loved [me] as a miser loves money, or a dragon loves gold.”

It is true that one summer my real mother took the training wheels off my bicycle, and I fell many times and got “scabs on top of scabs.” She did that so I would learn and earn “a feeling of accomplishment.” She trusted me with a little freedom. I am better for it.

My real parents love me. They are dull and distracted and flawed, but they are neither abusive nor neglectful. They gave me — the smartest person in this story (other than the cat) — the gift of being not too special. Loved, yes. Spoiled, no.

That’s why I choose them instead of you. 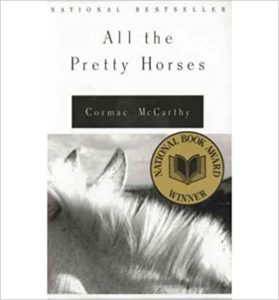 In All the Pretty Horses, our hero, John Grady Cole, meets a 15-year-old boy who’s already an outlaw. He says his name is Jimmy Blevins, like the preacher on the radio. Later in the book John Grady Cole goes to meet Preacher Jimmy Blevins and his wife, who is not named.

The story doesn’t tell us whether the Blevins are the boy’s parents or not. If they are, we don’t know if they were terrible people who drove their son away, or if they were doing the best they could with a wild stallion of a child.

Sometimes a letter will not suffice. Sometimes you need to write a poem.

This poem imagines that the entire Jimmy Blevins prayer and healing ministry is a way for these parents to simultaneously keep on keeping on through their grief while also attempting to reach their son, via radio.

(All spellings and punctuations are drawn from Cormac McCarthy’s style in this story.)

There he goes, off on some horse, like my boy,
a fool for bowlin alleys an horses an guns, a mean
ol mule, hard of heart. Damn near destroyed
us. But Jimmy Blevins Gospel Hour’s clean
heard to Timbuctoo, France, south pole, Mars.
Criminals in Mexican prisons’ll barter for a radio
just to hear the falsetto cry of Jimmy Blevins. Man’s
wore out. Never thought a fella’d come to Del Rio
on some big bay and not ask for no blessin,
just eat my cobbler, mam me, not ask questions.
Nice boy, that one, tho not one for conversation.
People have no idea how long we been prayin.
I didnt say nothin bout which of us was missin
cuz Sweet Jesus, the Poor Darlin just might be listenin.

1. Who are some parents in a book that have stuck with you?
2. If you’ve read any of these three books, share your thoughts on the Dursleys, Coraline’s real or Other Parents, and the Blevinses.
3. Share your July pages. Sliced, started, and abandoned are all fair game.

Grownups
A Month in the Country, by J.L. Carr
M Train, by Patti Smith