Mildred Ruffner and Cindy Newton are fictional characters from Laura Boggess’s novel Mildred’s Garden. The Preston County Inn and the town of Kingwood are very much real places. If you ever find yourself in Kingwood, West Virginia, we hope you’ll stop by by The Preston County Inn. You won’t be disappointed.

When Mildred Ruffner and Cindy Newton decided to open a bed and breakfast, they called on the rich hospitality community in their home state of West Virginia to educate them. “Why, if I can help you avoid the mistakes I made when I opened my inn,” one helpful proprietor told them, “I’d be more than glad. It takes a village, you know.” Mildred and Cindy arranged to visit and tour several bed and breakfasts near or around their proposed site to see what they could learn. What follows are some notes from Mildred’s journal detailing some of the things they learned on their visits.

Name of bed and breakfast Kingwood, West Virginia, the county seat of Preston County offering a lovely glimpse of small-town America. Though the inn is on Main Street in “downtown,” it is surrounded by picturesque, rural farmland. The inn itself is on a large quiet, lot and offers plenty of privacy. Kingwood is home to the Preston County Buckwheat Festival every September and also provides opportunities for outdoor activities such as fishing and hiking.

Details of our visit

“Mildred, would you hurry up? We’re already late for our check-in.” Cindy was snappy tonight.

We’d gotten a little lost on the curvy, windy roads taking us into Preston County, but the last light of day lingered on the horizon. I was distracted by two orange tabby cats who had come down the long walkway of the Preston County Inn to meet us.

“But, Cindy, how can you ignore these little fellows?” I bent down and rubbed one of the cats under the chin. He arched his back appreciatively. Not to be ignored, the other cat rubbed up against my legs, asking for the same.

“You know I’m not a cat person. I told them we’d be here an hour ago!”

“You left a message explaining our poor navigational skills. I’m sure it’s fine.”

I hiked my overnight bag up onto my shoulder and hurried to catch up with Cindy, who was mumbling to herself.

“It’s just inconsiderate, that’s all. I mean, some of these people live in these inns and they don’t need to be waiting for errant guests who may or may not show.” She barely glanced at the gorgeous front porch arrayed with several conversation areas. I hesitated, glancing longingly at a wicker loveseat that was calling my name. The heat of the day was just beginning to dissipate and I saw fireflies showing off under the large oak tree on the property. But Cindy was already through the door and ringing the bell for service. With a sigh, I followed. And so did a cat, slipping through the door behind me silently.

A woman appeared from down the hall, “Hello!” she called warmly. “I see you’ve met Sherbert!” She scooped the cat up, saying, “Not today, Mister,” and gently tossed him out the door. Then she checked us in with no fuss, told us how to find our room, and explained the amenities. Then she disappeared back down the hall. Gathering our things, we climbed the large staircase to find our room.

“Do you believe in ghosts?” Cindy whispered, as we tiptoed down a dimly lit hallway. “I mean, if any place would be haunted, this one has good cause.”

“There was only that one article we found about the ghost called Stephanie. It sounded more like a gimmick to me.”

“I know, but what about Isabel? With a tragic story like hers?”

Cindy was referring to Isabel Brown, the first mistress of the Federal Brick House, as the inn was known in its early days. Cindy had read me the story of the house’s first owners from the inn’s website on the drive in.

“The Inn was constructed in the Civil War era by James A. Brown, an attorney and a graduate of West Virginia University. He fell in love with a beautiful girl named Isabel who was from Baltimore. They were married and the house was given to Isabel as a wedding gift from her loving husband.

However, they lived in the house for only one year. Isabel contracted smallpox and soon died. James Brown became a Victorian mourner and would not allow anything belonging to his wife to be touched. Nothing was to be changed or moved. Even her sewing remained as she left it, needle in cloth and thimble nearby.”

After she’d read the story to me, Cindy had nearly swooned.

“I think you’re letting your imagination get carried away.”

“Just admit it might be possible,” Cindy said, eyes darting to the dark reaches of the hallway.

I rolled my eyes and slid the key into the lock on the heavy wooden door.

The room was comfortable and looked like it had been recently renovated. Our window looked over the veranda and the wide, sweeping lawn. I pulled back the ruffled curtain and pushed the window open a bit to let in the cool night air. We admired the fast-disappearing sunlight casting a honey glaze over the small-town charm of main street.

“I’m hungry,” I said. I heard Cindy’s stomach growl in response. We had missed dinner due to unintentionally taking the scenic route. It was getting late and the dining room was closed, but we hoped we could order food at the bar downstairs.

Norma Jean’s was a tiny taproom, but there were already several locals bellied up to the counter. There was a slight lull in the buzz of conversation when Cindy and I entered the room, but it picked back up when we approached. 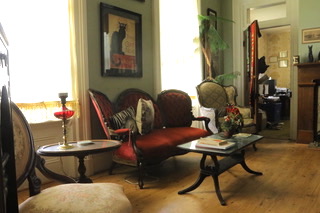 “What may I get for you ladies?” said a fresh-faced young lady. Her name tag read “Ann.”

“We were wondering if we could order some food?” Cindy asked.

“Of course!” Ann said, pulling out some menus. “Have you been here before?”

We told Ann about our plans to open our own bed and breakfast in the future and that we were on a fact-finding mission.

“Oh! I’m sorry Jean and Debbie aren’t here to talk with you. They would love to share their story. The Guillot”s have owned this place since 2008. Jean-Manuel is our chef. He’s amazing and his food is kind of famous around here. Unfortunately, they’re out of town on business right now. They rarely get a break from this place. It’s been their life and their passion. But don’t worry, Jean has trained his kitchen staff very well. The food is always excellent.”

We ordered some appetizers to share so we could taste a variety of the menu items: sweet chili shrimp, batter-dipped mushrooms with cucumber-wasabi sauce, Gochujang wings, and Korean spring rolls. Cindy ordered a root beer made by one of the featured West Virginia breweries to sip on while we waited.

“So,” Cindy leaned in closer to Ann as she poured her root beer. “What do you know about this place being haunted?”

Ann didn’t move her eyes from the glass she was filling. “Oh? You mean Stephanie? The rose-scented ghost? Only what I’ve heard. I’ve never seen her.” She set the glass down in front of Cindy and was immediately hailed by another patron.

“Hmmmph.” Cindy was disappointed. But not for long. When the food came, we were both in culinary heaven.

“This Gochujang sauce!” I said.

“And this sweet chili sauce!” Cindy said, popping an entire shrimp in her mouth.

Ann smiled. “Well, Jean is French, you know. He does love his sauces, Asian or other.”

We gobbled down every last morsel like we hadn’t eaten for days. When we were done eating, I could still hear that wicker loveseat calling my name. Ann poured us both a cup of decaf coffee and cut us a thick piece of the three-berry tart to share. We moved dessert and coffee to the porch.

The crickets were playing their castanets and, despite the lateness of the season, a few fireflies lingered. Tummy full and happy, I could feel myself sinking deeper into the loveseat cushions. It was the most relaxed I’d felt in a long time.

A little later, I fell asleep as soon as my head hit the pillow. My sleep was filled with sweet dreams of Asian chili sauce and orange sherbet. Until I was awakened by Cindy’s voice hissing in the dark.

“Mildred! Mildred? Mil? Did you hear that noise?”

I rolled over groggily. “What? I didn’t hear anything.” I was about to nod off again when the light popped on.

“You didn’t hear that?” Cindy was standing by the window, a pillow in her hands.

I sighed heavily and sat up in my bed. “What did it sound like?”

“It was a—a kind of screeching, scratching sound.”

“Yes. It sounded like it was coming from the window.”

I rubbed the sleep from my eyes and stared at Cindy, her pillow at the ready.

“If it is a ghost, what are you going to do? Have a pillow fight with it?”

Just then, a loud screeching noise sounded from the window area. Cindy screamed and jumped up on her bed.

“Oh, for Pete’s sake, Cindy! I’m sure there’s a perfectly logical explanation.” The sound came again, this time louder and followed by a deep, resonating growl. It was my turn to jump. Cindy whimpered.

“As far as I know, ghosts don’t growl.” I slipped out of bed and picked up the bedside lamp—a wooden spindle model. I pulled plug out of the wall and, wielding it like a sword, shade toward me, advanced toward the window. In one fluid movement, I pulled aside the curtain and lunged at the window.

The next morning, in the breakfast room, I overheard some of the other guests discussing in hushed tones the screaming they’d heard in the night. I just smiled as I watched Cindy give Sherbert a bite of her toast. Complimentary continental breakfast, free wifi, private bathrooms, beautiful common areas that include a screened-in porch, Direct TV, excellent food at the inn restaurant, close proximity to area attractions, including a wildlife zoo and a World War II museum. Did I mention the food?

Special Tea for Your Visit

Take some delicious tea with you to The Preston County Inn (if you’re the type who likes to bring your own along). Or staycation and treat yourself to Plum Deluxe tea at a discount.

Special discount available for patrons throughout September, in honor of the release of Mildred’s Garden.