From Winslow Homer to James Wright

On the wall at the bottom of the stairs in our split-level, my mother had hung a print of Winslow Homer’s painting Sunlight and Shadow. The wall was unlighted; when the door beside it opened onto the side yard, the dappled-green oasis of the print slipped out of view behind it. All day long, our comings and goings with our dog, an all-black Australian shepherd named Shadow, plunged the print into darkness, again and again.

Ankles crossed, high-buttoned boots peeking from beneath a full white skirt, the woman in the print is eternally reading a book in a hammock. She was and is reading, her face tilted seriously toward the page, suspended between trees, suspended in a moment made of brushstroke, paint and canvas. 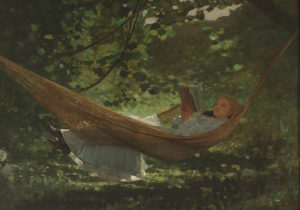 Winslow Homer’s “In the Hammock”

Growing up middle-class in the middle of a steep hill in a subdivision, I absorbed certain ideas about leisure. It happened on weekends, after the floors had been vacuumed and the dishes washed, after the lawn was mowed, after I’d cleaned my room and helped with the laundry. I took a book and a blanket to the backyard shade, reading while my parents tended the garden. Or sometimes I just lay on my back and watched the clouds. During the week, I’d sometimes dart through the front door in the pre-dinner hour, taking my current Mead notebook to the concrete slab that jutted out into the lawn like a dock. I loved to sit and look at the sky and the trees, and write about it. Attentiveness was a type of rest, like reading: I was reading the moment, and trying to find myself there.

Like my mother’s print, rest‒of the hammock-lounging variety‒hung out in an in-between place. It was unproductive and a little suspicious. Maybe it was better if you didn’t call too much attention to it, if you sort of wandered into it accidentally, ready to spring back into action at any moment. There might be something left undone, some item left unchecked on the day’s to-dos.

I remember reading James Wright’s puzzling poem, Lying in a Hammock on William Duffy’s Farm in Pine Island, Minnesota, at thirteen or fourteen, and feeling a flutter of anxiety in my chest at that last, surprising line: I have wasted my life.

Wasting my life was the thing I feared most. At ten, sensing the imminent arrival of my teenage years, I had doubled down on childhood, bringing my doll with me everywhere, lacing my sneakers with neon laces, and playing jacks and double-dutch at recess, when most of my peers were beginning to cluster in gossipy groups beside the parallel bars and basketball courts.

As a quiet, romantic teenager, I filled notebooks with poetry, and hoped to publish many books. My favorite song was Joni Mitchell’s “The Circle Game,” with its haunting lyrics about being “captive on the carousel of time.” Regret seemed, to me, the most tragic fate of all, but it also seemed inevitable. How many times had grown-ups slipped into that familiar wistful tone as they told me, “Enjoy it while you can?”

Wasting my life, then, had something to do with cheating regret, and escaping time’s carousel by bringing fervent feelings of joy to childhood‒the part that dragonfly-catching kids learn to rush through in their haste for adulthood.

In my twenties, I felt compelled to savor the moment just as much as I had in childhood, but I’d also experienced regret, and survived it. Just like the boy in Joni Mitchell’s song, my dreams had lost some of their sheen, and things were different on my own than I thought they’d be, but I was mostly okay. My anxiety now centered on the path I had taken thus far, and the one I thought I needed to be on next. For the first time, I felt a narrowing of options, and it scared me. I didn’t want to make the wrong choice. Wasting my life, I felt certain, had everything to do with making choices.

When I encountered the poem again in graduate school, I was struck by how much more the poem had to say than I remembered. Had there always been this much noise? The butterfly, the cowbells, the horses and the chicken hawk‒how had I not noticed how much was going on outside the speaker’s mind? And what did it all mean? What was the deal with that empty house? Maybe there was something outside the poem’s lines to confront, some tragedy in James Wright’s life that would help me understand the warning here, the message I was sure the poem held about leading a full life.

Today, as a mother of three at midlife, I read poems sporadically, and I rarely have time for research and deep analysis. When I let the imagery alone speak to me, I can find new meaning. I’m now astonished by Wright’s economy, by all that he’s packed into this one poem, with its deceptively casual title. It feels plucked from a moment in time, brushing up against eternity. Without the title, it’s a poem of practically disembodied witness. The butterfly, the bells, the field of sunlight, and even‒almost absurdly‒horse droppings, are all gilded by the sharp contrast of the setting sun and the falling night. It’s a poem written at the time of day when I used to sneak off to write poems, catching the coattails of the day as it slipped by me once again, disappearing into memory.

Reading myself inside the lines now, it becomes a poem of defiant rest. The speaker leans back into the darkening evening, a time when a mother of small children is totally preoccupied with life’s business: bringing toys in from the yard ahead of tomorrow’s rain, carrying laundry upstairs, clearing the dinner dishes, running a toothbrush over my daughter’s baby teeth, one of them just beginning to loosen.

Most days, I miss the day’s shift from light to shadow. What would it feel like to lie in a hammock instead, like this speaker, my hands tucked behind my head with my elbows jutting subversively out?

I have wasted my life, the speaker says, and this time I can almost hear them heave a deep, joyful sigh. It seems like the speaker is saying, This is what I should have been doing all along. 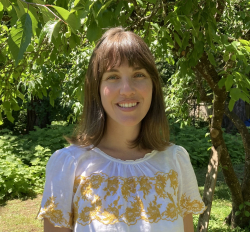 Melissa Reeser Poulin
Melissa Reeser Poulin loves growing food and flowers, and sewing clothes for friends. She is passionate about healthcare reform and is learning the art of community acupuncture at POCA Tech, part of the movement to provide affordable and accessible acupuncture for all. She's the author of a chapbook of poems on faith and motherhood, Rupture, Light, and helped edit Boneshaker: A Bicycling Almanac and Winged: New Writing on Bees. Find her at melissareeserpoulin.com.

Melissa Reeser Poulin loves growing food and flowers, and sewing clothes for friends. She is passionate about healthcare reform and is learning the art of community acupuncture at POCA Tech, part of the movement to provide affordable and accessible acupuncture for all. She's the author of a chapbook of poems on faith and motherhood, Rupture, Light, and helped edit Boneshaker: A Bicycling Almanac and Winged: New Writing on Bees. Find her at melissareeserpoulin.com.